Retribution Falls is the first novel in The Tales of the Ketty Jay, which promises to be a series of semi-stand-alone novels set in the same world and focusing on the crew of the airship Ketty Jay and its crew of miscreants and scoundrels. If I had to provide a quick soundbite for this it would be Firefly meets Crimson Skies, with a dash of Locke Lamora sprinkled on top. 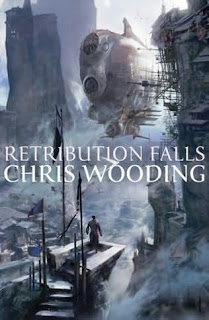 Darian Frey is the captain of the Ketty Jay, a battered old freighter which he keeps running by the skin of his teeth, by accepting jobs on the dubious side of the law and trying not to get into too much trouble. When Frey is offered the chance of a lifetime - an easy theft in return for a massive fortune - he overrides his common sense and accepts the job. When it goes hideously wrong and a lot of people die, Frey realises he has been set up, and must prove his innocence even though he and his crew are now Public Enemy #1. Frey's quest to redeem himself takes him and his crew through multiple aerial dogfights, double-crosses, high society soirees and lowlife gambling dens. At the same time we get to know his crew, from the troubled new navigator harbouring a dark secret to the former aristocrat-turned-demon-summoner to the alcoholic ship's surgeon to the powerful and dangerous metal thing they keep in the hold...

Occasionally a book comes along which takes the concept of fun and turns it up to 11. Retribution Falls is one such book. The story powers along at a relentless, page-turning pace. The characters are a diverse and fascinating bunch and Wooding uses skillful economy in getting into their backstories and motivations quickly and convincingly without bogging the story down in unnecessary detail. The world of Vardia is a fascinating one as well, with its diverse landmasses, the dark, forbidding storms that wrack the planet, and a wide range of cultures and people. There are certainly a tremendous number of concepts introduced in this book that aren't followed up on, leaving open a large number of possibilities for future adventures with this crew.

What makes the book refreshingly different from so many fantasies is the setting and tech-level. Airships are the primary method of transportation and the cavalry charges and duels of traditional epic fantasy are here replaced by frigate broadsides and intense dogfights. The technology of the airships and how they work is depicted convincingly, and the battles are great fun and a nice change of pace for a fantasy novel.

As I said before, the book is 'FUN' but at the same time it is not lightweight. Some of the characters are carrying real demons around with them and Wooding doesn't wimp out of some the bad things they've done or had done to them. There are also some genuinely unsettling moments (one flashback sequence to an arctic location is pretty disturbing, which is all the more impressive since we know the character involved survives), and hints of greater, darker threats out in the world which could come into play in later books.

Retribution Falls (*****) is an accomplished and enjoyable novel, and hopefully the start of many adventures for this crew. The novel will be published on 18 June 2009 in the UK in hardcover and tradeback, and the tradeback will be available in the USA via Amazon after that date as well.
Posted by Adam Whitehead at 23:41

I like your blog. Would you be kind enough to do a review of my fantasy webcomic, Epic Fail? It's at http://comicofepicfail.com and being a webcomic it's in print and screen simultaniously! I'll be happy to answer any questions you have.

My first 5-star on the Wertzone! You see that, Abercrombie? ;)

Thanks again for the review, Adam. Gollancz and I are actually going to throw together a mini competition thing with a few advance reading copies of Retribution Falls to be won. Would you mind if I posted it up on here when we've got it sorted out?

Let us know, Chris. I usually don't do competitions but for a book of this quality I'm willing to make an exception :-)

And yes, the 'Crombie has a new target to hit with 'Best Served Medium Rare'.

Adam, I opened your blog read the first paragraph of your review, looked at the cover and you got me hooked. I LIKE AIRSHIPS !!

Of course I read the rest of your great review.

I must definitely buy and read this book! And I was glad to read this will be the beginning of a series....

I'm really nosey to read. So please if you get the opportunity for a competition for an ARC please do it. Anyway I will take part.

Wish I could get ahold of this book now!