Bit of an exclusive scoop here. Paul Kearney, author of The Sea-Beggars series and last year's excellent The Ten Thousand (my 2008 book of the year), has signed a deal with Solaris for two more books set in the world of the Macht. Early working titles are Corvus and Kings of Morning. Congratulations to Paul, and I'm already looking forward to the new books. 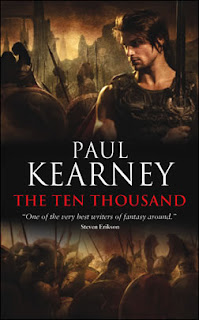 This is in addition to the reprints of Kearney's excellent Monarchies of God saga, a five-volume epic fantasy which is to be reissued as two omnibuses entitled Hawkwood and the Kings and Century of the Soldier. Release dates have to be finalised for those, but will hopefully be for later this year.
Posted by Adam Whitehead at 18:36

I will try The Tenthousand. His excellent Monarchies of God books were criminally overlooke. Paul Kearney does not only excel at battle scenes, he is just awesome.

I wonder why he did not get the credit that he (IMO, of course) deserves up to now. Joe Abercrombie does, and Kearney is playing in the same league, after all.

I just read who rated the book at amazon.com and the reasoning "not enough fantasy elements" of one poster made me cringe... really, what strange twist of fate lets Kearney get ignored by the masses and read by people who make comments like the one I just mentioned...!

This is great news! Ten-Thousand had its mixed reviews but I loved it right from the beginning. Two more books set in the World of Macht. 'Tis a good day.