Eagle Rising is the sequel and follow-up to Hunter's Moon. That book established the character of 'Jack', a special forces/wizard fighting the forces of evil on behalf of Her Majesty's Government. Eagle Rising picks up the action a year or two after the first book, again with an unrelated action-packed James Bond-esque prologue before the story proper kicks off. 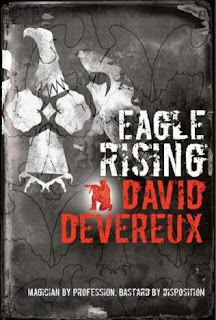 Jack is given a new mission: his bosses have gotten wind of something occult and dangerous in the offing, apparently linked to a neo-Nazi group operating in London. Jack is assigned to infiltrate the group via one of their money men, who works in a London bank. Jack is successful, but initially finds little evidence of magical involvement amongst the racist thugs and football hooligans whose favourite past-time is to complain at length about Britain being overrun and ruined by immigrants and homosexuals. When this group's tactics turn violent, Jack uncovers a more sinister link to an organisation with a very ambitious plan indeed...

Sadly Eagle Rising features no kinky sex or lesbian bondage witches like its forebear, which will no doubt divide readers on the appeal of the novel. The story otherwise unfolds in a similar manner to the first book, however, with Jack's investigative skills and magical abilities deployed intelligently to investigate a problem and find a resolution. This the author pulls off quite well, resulting in a readable, exciting action-adventure novel with some good thriller elements. The writing shows improvement from the first volume, and characterisation is stronger. Jack's ambiguous feelings towards some of the people in the neo-Nazi movement (some of whom don't seem to really be there but are from peer pressure) are nicely played, and his complex relationship with an MI5 officer from the first book evolves quite well. The story is pretty daft - possibly dafter than the first one if that is possible - but played straight and works due to that.

Eagle Rising (****) is a fast-paced, enjoyable read which improves on the first novel. It's not likely to win any awards or change any lives, but it is certainly entertaining and well thought-out. The book is available in the UK from Gollancz in the USA via Amazon. A third book in the series, Turnabout, is in the planning stages.
Posted by Adam Whitehead at 23:15

Based on the two reviews you provided for Devereaux's work, they sound like they'd fit right along side Charles Stross's Laundry/Bob Howard stories.