Look to Windward is the nineteenth novel by British SF and mainstream author Iain M. Banks, and the seventh book set in his Culture universe. Published back in 2000, there was some speculation that this would be the last Culture book, especially because the title of the novel comes from T.S. Eliot's poem The Waste Land, as did that of the first Culture book, Consider Phlebas, and as a result nicely bookends the series. However, Banks did release a new Culture novel, Matter, last year. 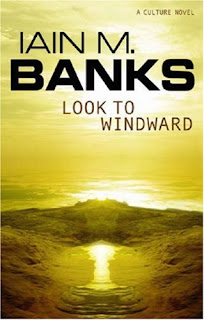 Eight centuries ago, the Culture and the Idiran Empire fought a significant war after the latter invaded the Culture's territory. The weak, supposedly decadent Culture crushed the invaders in a conflict that lasted half a century and killed almost 900 billion sentient beings. During the course of the war two stars were destroyed, killing untold civilians on the worlds orbiting them. The Culture considers this act to have been a tragedy of the war they have been careful never to forget.

800 light-years from the location of the supernovae lies the Culture Orbital Masaq'. A ring-shaped artificial worldlet three million kilometres across, orbiting a gas giant (yes, Banks' Orbitals and Niven's Ringworld were the direct inspiration for the Halo worldlets in the computer game sereis), Masaq' is home to fifty billion intelligent life-forms. Amongst them is Mahrai Ziller, a composer and former native of the planet Chel. This world was formerly home to a rigid caste system that was inhibiting the planet's social development, so the Culture attempted an intervention meant to lead to a peaceful revolution. Instead, a bloody civil war ripped the planet apart. The Culture admitted its culpability, a shocking admission for a civilisation very rarely known to have failed in its goals.

The primary storyline sees the Chelgrian Major Quilan despatched to Masaq' to convince Ziller to return home. Ziller, who is busy preparing a symphony dedicated to remembering the war and the destroyed stars and planning to perform it as the light from their deaths reaches the Orbit, is uninterested. The Culture Mind (hyper-advanced sentient AI) which runs Masaq' takes a special and keen interest in the symphony for reasons that eventually become clear. 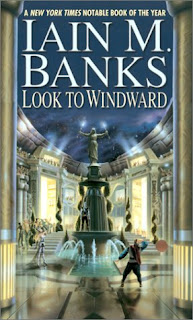 Look to Windward is an accomplished and intelligent science fiction novel written by one of the modern masters of the field. If not quite up there with Banks' best books, it is still a powerful novel which examines the morality of warfare, the dubious notions of 'acceptable losses' and 'proportionate responses' and the idea of what one person can do to make amends for the 'acceptable' acts they commit in war which in peace would have them condemned as a mass-murderer. It's a powerful theme and explored effectively. However, the book is at its heart a thriller as one person is given the opportunity to avenge two wrongs, one ancient and one fresh in memory, and whether they are prepared to go through with that course of action. As usual, Banks slips in his black humour, terrifically original starship names and his usual musings on how a true utopia like the Culture can survive and thrive.

Look to Windward (****½) is a terrific science fiction novel and well worth a look. It is available in the UK from Orbit and in the USA from Pocket Books.
Posted by Adam Whitehead at 00:47

Kind of disagree with your conclusion. Look to Windward is for me by far the best Banks novel, and I've read all the Culture ones save Matter.

Which Banks books are your favourites Adam? For me nothing has yet beaten Use of Weapons.

Have got it but haven't read it. Consider Phlebas and The Wasp Factory are my favourite Banks so far.

I'll accept having to read The Affirmation as a good excuse, but since you've finished that you know what you have to do ;-)