The Affirmation is the eighth novel by British SF author Christopher Priest, originally published in 1981. As with his later novels The Prestige and moreso The Separation, The Affirmation is a book about identity, truth, perception and perspective which rewards multiple readings and is open to many interpretations of what is happening. 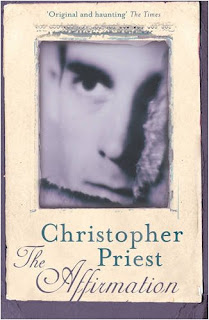 A 29-year-old man named Peter Sinclair is tormented by the death of his father, an unhappy relationship with a woman named Gracia and the loss of his job in London. Offered an opportunity to fix up the dilapidated country house of a friend of his late father's, he jumps at the chance. Whilst performing this job he becomes obsessed with the idea of writing his autobiography and defining his life through words. But, anxious to protect the identities of real people, he changes their names, then the names of the places they live, then the very nature of the world they exist in.

But that may be a lie.

A 31-year-old man named Peter Sinclair is living in the city of Jethra, part of the great nation of Faiandland. Unexpectedly, he wins the Lotterie-Collago. The prize is a course of treatment given on the distant southern island of Collago, which grants the recipient immortality but only at the price of total amnesia. On his way through the islands he meets and falls in love with a woman named Seri, but is occasionally haunted by thoughts of a manuscript he wrote two years ago, the story of his life with some of the names and places changed.

That may also be a lie.

The Affirmation utterly defies any attempt to summarise it. It is a twisting and at times bewildering novel that moves between at least three different levels of reality, and each of those is open to multiple interpretations. Peter is really a native of a different, although similar, world and our planet and everything on it is a figment of his imagination. Peter is really a Londoner suffering a total mental collapse in the wake of personal tragedy. He is suffering from amnesia, or schizophrenia, or an acute solipsist, or all three. The manuscripts are real, or only exist in his head. The manuscript he is writing is the actual novel itself, forming a Mobius strip of narrative and causality that loops back in on itself: when you reach the end of the novel, which literally finishes in mid-sentence, you can go back to the start and re-read it as its own sequel, with greater understanding.

Priest does his usual thing here of using a clean, easily readable prose style which lures the reader into a false sense of security until the story's second level of interpretation and reality kicks in, leaving the reader confused as to what is happening. And just when you adjust for that, something else happens that hints at a grander but stranger truth yet. The Affirmation is a puzzle, but not necessarily a puzzle with a single solution, which makes it a fiendishly addictive read.

The Affirmation (*****) is one of the most original and mind-blowing books I have read, somehow even eclipsing The Separation in what it asks from the reader and the possible answers it gives out. The novel is available in the UK from Gollancz and in the USA from Pocket Books. The latter is out of print, but Amazon.com still has some copies available.
Posted by Adam Whitehead at 16:53

That reminds me a bit of Lars Gustafssons's The Third Castling of Bernard Foy which is also a play with identities in guise of a spy thriller, an adventure story, a coming of age tale and more.

It's a tragedy that this book isn't better known. It is clearly his magnum opus, and the most purely representative of his style and preoccupations.