This catechism is repeated throughout the first three and a half seasons of Battlestar Galactica and is integral to the mythology of the show, yet until this latest batch of episodes we had no idea what it really meant. As the final run of episodes in the series opens, it becomes abundantly clear that the Cycle of Time, first referenced by Leoben in Season 1, is the real key to understanding what it is that the series wants to say, and it is not coincidental that the most decisive change in the attitudes of the two sides came in the Season 4 mid-year cliffhanger, when attitudes were changed and, as two characters said, "All of this has happened before but it doesn't have to happen again." 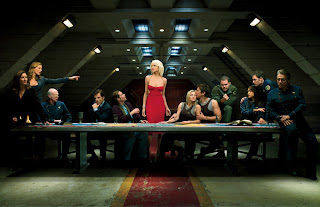 In the first half of Season 4, the Cylons suffered an irrevocable split down their middle over the issue of their treatment of the mechanical Cylons and the search for the Final Five humanoid models, with the Sixes, Twos and Eights splitting away from the Ones, Fours and Fives (plus Boomer). The rebels were subsequently weakened in battle and forced to seek refuge on a single baseship which made it to the Colonial Fleet. In return for intelligence on the Final Five and assistance in destroying the Cylon Resurrection Hub and retrieving the last remaining Three (who knew the identities of the Final Five), D'Anna, the Fleet granted them temporary succor. After much angst, betrayal and a tense stand-off, the two sides united and were rewarded with what both sides have been seeking for the past four years: the location of Earth.

Unfortunately, Earth turned out to be a blasted atomic wasteland. Episode 411, Sometimes a Great Notion, essentially deals with the fall-out from this discovery. The planet was devastated in a nuclear holocaust more than two thousand years ago. Millions of people were killed. Digging on the beach, Dee finds some children's toys and seems to suffer a mini-breakdown. Back on Galactica Roslin, suffering from shock that her dreams and much-beloved prophecies turned out to be a bunch of crap, withdraws from public view. Despondency grips the Fleet. Suicides take place. Archaeological teams dispatched to the planet uncover even more horrifying evidence: the 13th Tribe weren't humans at all, but an earlier race of humanoid Cylons. The Four suffer flashbacks, Tyrol to his own death (blasted into atoms by a nuclear fireball) and Anders to the song he wrote for the woman he loved. Eventually, faced with the ruin of everything he has fought for these last four years, Adama is forced to step up to the plate (perhaps responding to Lee, who's bouncing back in the face of adversity in this episode is impressive, even whilst contemplating all the friends he's lost in battle for the dream of Earth) and promises the Fleet he can find them a new home. But, on the surface of Earth, Starbuck makes a discovery that rocks her universe and Tigh's own flashback is one with horrifying and stunning implications.

This is a remarkable piece of television, one of the darkest episodes of anything I've seen in a long, long time. It's not every day on television you see a series regular blow their brains out over the wall with absolutely no forewarning whatsoever. The identity of the Final Cylon is indeed revealed, in a manner the audience probably wasn't expecting, but it's among the lesser revelations in this episode. Tragic, dark but still compulsively watchable.

The next three episodes - A Disquiet Follows My Soul, The Oath and Blood on the Scales - form a trilogy. The Fleet has left the environs of Earth and the question, "What now?" is on everyone's lips. In particular, with Earth now discovered and the purpose of the alliance achieved, the value of their new Cylon allies is increasingly being questioned. The Cylons offer to upgrade the jump drives of all the ships in the Fleet, tripling their range, but when Adama and Lee push this decision through over the objections of the ship captains, the result is a full-blown insurrection. Characters take sides, shots are fired and a lot of people die, including some regular and recurring characters who have been around since Season 1. This is an action-packed storyline, with explosions, gun battles and political drama which hearkens back to the early days of the show (particularly Season 2's Valley of Darkness, when Cylons boarded the Galactica and a running battle was fought with them throughout the ship). There are some really hard questions about right and wrong, law and order, political processes versus military ones and so on being asked underneath the action and the show gives some surprisingly pat answers (mainly by making the 'bad guys' do some really bad things, rather than backing up their own sense of justification). Still, after the most depressing story arc the show has ever done, having an action storyline does brighten things up again. 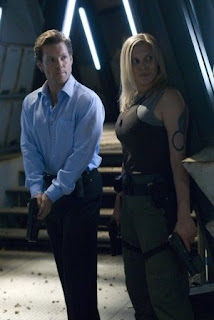 Note: Minor spoilers for UK/Irish viewers, as the following episode does not air until next week on Sky One.

Episode 415, No Exit, is another radical change of style. In episode 411 we learned that the Final Five Cylons had originated on Earth two thousand years ago, but not how they got to the Colonies, where they were for that time and why just the five of them, out of all the teeming millions of Cylons on Earth, survived. No Exit gives the answers. Anyone familiar with Babylon 5 will recall the Season 2 episode In the Shadow of Z'ha'dum, where the main story arc was broken down for the characters, a lot of backstory was revealed and the stakes laid out. No Exit does the same kind of thing, if in a rather clunkier fashion. It's probably no surprise that the Final Cylon is not dead, or that they have been a prisoner of Brother Cavil all this time. Cavil locks horns with them in a ferocious intellectual debate over the course of months, which may sound tedious but the two actors involved do some absolutely brilliant work here. Dean Stockwell has always been cool, superior and condescending as Cavill, always supremely confident whether it's facing off against Adama and Roslin or trying to bring D'Anna to heel. But he meets his match here as his creator rips his justifications apart and shows him how, for all that he wants to be a machine, he is as polluted by feelings and irrationalities as any human. It's fascinating stuff.

At the same time on Galactica, Anders, suffering from a wound sustained in the mutiny, begins suffering extensive flashbacks to his old life, and manages to spill the beans on a lot of subjects about the Final Five, who they were before and how they came to live amongst the Colonials. There's some great dancing around in the writing here as disparate elements going right back to the mini-series are woven into a story that, whilst not exactly cohesive, doesn't embarrass itself too much. The writers even find time to address some classic fanwankery from the Sci-Fi Channel message boards (such as why isn't there a model #7 Cylon). Whilst it's all fantastic food for thought and you'll understand the central conflict of the entire series much better by the end, it's not the most elegant piece of exposition you'll ever see (and doesn't compare too favourably with Lost's altogether more dramatic and exciting method of exposition they've been filling in for the duration of Season 5 so far), but the philosophical and ideological clash between Cavil and the Final Cylon makes for fascinating viewing.