Lost's fourth season may have been curtailed by three episodes, but it still packed an enormous amount of plot movement and revelations into its run. It was revealed that the Island is a prize being fought over between Ben Linus, the leader of the Others, and a corporate businessman named Charles Widmore. Widmore dispatched a team of mercenaries on a freighter with orders to take Ben prisoner and kill all potential witnesses. Instead, the mercenaries were defeated and the survivors of Oceanic 815 planned to use the freighter to escape from the Island. The freighter was instead destroyed. In an attempt to protect the Island from further incursions, Ben turned a wheel attached to an ancient mechanism deep below the surface. The Island promptly vanished, leaving six survivors of Oceanic 815 stuck on a helicopter just outside the area of effect. 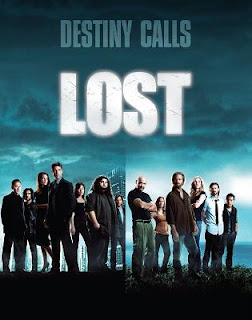 As seen in Season 4, Jack, Kate, Sun, Hurley, Sayid and Claire's son Aaron all escaped from the Island, along with Desmond (who'd been stranded there for three years) and helicopter pilot Frank Lapidus. Ben also escaped to the outside world, using the mechanism on the Island. Once back in civilisation, the Oceanic Six concocted a cover story to explain how they survived, and claimed that Aaron was actually Kate's son. However, their fears that everyone who remained on the Island had died were relieved when Locke appeared and told them that something 'terrible' had happened and they must return to the Island. At the end of the season it was revealed that Locke was now dead and Jack had accepted the need to return, with Ben offering to aid him in convincing the others.

Season 5 opens with the story proceeding on two parallel paths. Off the Island Jack attempts to convince the other members of the Oceanic Six to return to the Island with him, with varying degrees of success. Meanwhile, back on the Island the survivors, now led by Sawyer, discover that Ben's turning of the mechanism beneath the Orchid station has caused the Island to become 'unstuck' in time and they are now bouncing between different periods of the Island's history. The human body is not designed for such stresses and it becomes clear that the survivors are doomed unless they can find a way to stop the Island's movements.

There are several immediately noticeable things about this season of Lost. First off, the gloves have come off. Lost is now dealing with hardcore SF concepts and in a surprisingly intelligent and considered manner. Secondly, the flashback/flashforward paradigm has been dispensed with (at least temporarily), since every episode is now, effectively, both, with the stories having to cover sets of characters who have been separated by three years in time. Thirdly, we are starting to get some serious answers and explanations for some of Lost's deeper-seated mysteries, some of them going back right to the start of Season 1. The time travel story allows the survivors to visit different parts of the Island's history and see events unfolding that had previously only been alluded to, or events that had not been recounted but which explain some other elements of the mythology. The result is Lost's most demanding season to date - a full series re-watch, or at least a re-watch of Season 4, may be advisable before starting this season - but also possibly its most satisfying (speaking six episodes in, with eleven more to go).

Because You Left sets up the format for the first half-dozen episodes, with events on and off the Island being explored simultaneously. An enormous number of characters are visited and with the concept of the time-skipping also being introduced, the result is an episode that could have been incredibly confusing. Whilst it borders on going over-the-top, it is eventually pulled back down to Earth by simply emphasising the reactions to the situation by Sawyer, who is as lost and confused as the viewer as to what is going on, and Faraday's attempts to explain the situation.

The Lie is a bit calmer than the first episode, again by filtering the confusing mass of storylines by concentrating more on one character, in this case Hurley, off the Island. Hurley's storyline is great and the scene where he tries to explain to his mother the entire storyline of the series to date in about two minutes (and noting that Season 2 with the button and the hatch didn't make as much sense as it should have done) may be the comic highlight of the series to date.

Jughead abandons the Oceanic Six storyline in favour of catching up with what Desmond and Penny have been up to for the last three years. However, Desmond's slightly odd cross-temporal relationship with Faraday (established in Season 4's The Constant) has him receiving hints that the people back on the Island are in distress, and he sets out to help from the outside world. Back on the Island the survivors find they are now in 1954, with the Others attempting to dispose of a nuclear bomb the US Army was planning to test on the Island. This is a great episode with some fantastic humour and also explains some of the more mystical elements of the show's backstory in a very convincing manner.

The Little Prince is more mundane, a busy episode with characters moving from A to B without a centred storyline of its own, but remains entertaining. Sawyer again gets the best lines, but there is a feeling of ennui creeping in as the following of several complicated storylines across multiple timelines begins to get a little wearying. However, things are livened up by the unexpected ending (well, it was expected, just not quite yet), which gives Lost one of its best cliffhangers in some time.

This Place is Death is another very strong episode, with Daniel Dae Kim making a good impression on his return as Jin (last seen on the freighter when it exploded). Jin is thrown in the deep end, as he is totally unaware that he and the other survivors of 815 are moving randomly through time, although he gets an inkling something is wrong when he is rescued by a bunch of French people who say the year is 1988. The episode delivers some nice pathos (meeting Danielle as a nice, happy young pregnant woman is surprisingly affecting, as we know how she will eventually die after a long and painful struggle on the Island) and gives us some more hints about the nature of the Monster (which makes a return appearance after a lengthy absence). The rest of the episode is also good, with the audience learning how Locke gets off the Island and how the Island is saved from the time-jumps. The death of Charlotte, however, comes out of nowhere. Her character had not been significantly developed over the course of her time on the show and her death seems to render much of her arc pointless (shades of Libby from Season 2 here). Still, the death scene was well-played by Rebecca Mader and Jeremy Davies as Faraday.


Spoiler warning: the following episode has not aired in all territories yet.

316 brings us up to date with the first in a trilogy of episodes focusing on one part of the story, which when combined gives us a clearer picture of how the season develops from here onwards. Next week's episode focuses on what happened to Locke after he left the Island, whilst the following week fills in the fate of the survivors on the Island after that event. This episode, however, brings us back to the Oceanic Six and explains how they came to return to the Island. Some major backstory is filled in (how the Island's location was discovered by the DHARMA Initiative), some long-held suspicions (about 'windows' in space/time) are confirmed and it's good to see the story moving forward decisively. If the whole season had been about the Oceanic Six trying to get back to the Island, it would have been deathly dull, and their early return is a bit of a surprise. There are a few loose ends left behind, though, with the fate of several characters left hanging in the balance, several gaps in the narrative hinting at flashbacks to come and another great cliffhanger ending.

Season 5 of Lost has gotten off to a great start with a strong run of episodes which move with a real sense of purpose and some long-running stories and mysteries fitting together like a satisfying jigsaw puzzle. Hopefully the rest of the season can maintain the quality of this opening batch.

Nice breakdown. But I think 316 should have gotten a higher rating. It was my favorite episode of the season, all things considered. The acting was great, there was only one or two lines I cringed at, and even the cinematography was fantastic, at the level of an HBO show.

Also, I disagree with your feelings about Charlotte and Faraday. Personally, I think they're both horrible actors that pull me right out of the show, and their dialogue makes me want to vomit. I was rooting for her death ever since her nose started bleeding, and don't miss her one bit.