Odd and the Frost Giants by Neil Gaiman

No doubt some people will be thinking, "I've never heard of this!" which is understandable. Odd and the Frost Giants is a very slim (100 illustrated pages of reasonably big type) book that Neil Gaiman wrote for World Book Day last year. A whole bunch of copies turned up in my local Waterstones' YA department and at just £1 I decided it was worth a look. 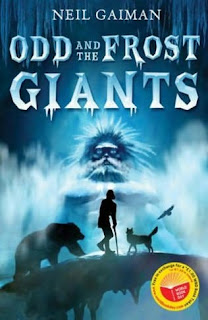 The book follows the adventures of young Odd, a Viking boy whose father dies when he is young and he is crippled by a falling tree shortly thereafter. When a devastatingly bad winter afflicts his community, Odd takes refuse in his father's woodcutter hut, and meets an eagle, a bear and a fox. Things then take a very unexpected turn and Odd finds he has a problem to sort out with some very large people with a chilly disposition...

Odd and the Frost Giants is a very fast read, but it's still a lot of fun. This is Gaiman at his most playful and approachable, with none of the real darkness of his adult work (although occasional flashes show that Odd's life is not a happy one), but it works well for that. Those who enjoyed his depiction of Norse mythology in both Sandman and American Gods will also be interested in seeing him revisit the concept here in a much briefer form.

There isn't much more to say - this review is an appreciable percentage of the length of Odd itself - other than that this is a fast, entertaining read where Gaiman grabs the reader's attention and spins a fine yarn indeed

Odd and the Frost Giants (****) is no longer in print, but copies can be found Amazon.co.uk and Amazon.com, as well as in many bookshops' backstock, and is well worth a look. Redshift has also recently reviewed the book here.
Posted by Adam Whitehead at 17:57

Email ThisBlogThis!Share to TwitterShare to FacebookShare to Pinterest
Labels: neil gaiman, odd and the frost giants

I grabbed this from my local waterstones too. I've got it stashed for when i need cheering up.

Hey Adam - Nice writing. Can you please contact me at Swords.com. I don't want to leave my contact email here. Cheers - Slasher