Without Warning by John Birmingham

14 March 2003. The world watches on as the United States and her allies prepare for the controversial invasion of Iraq. What happens next is totally unexpected: a field of energy materialises over the North American continent, stretching from north-east of Newfoundland to just north of Acapulco, and from just south-east of Seattle to a few miles north of Guantanamo Bay. Virtually the entirety of the continental United States, most of populated Canada and almost all of Mexico and Cuba are affected. Within the 'Wave', as it becomes known, every single living being is instantly incinerated, but the cities are left intact. However, the Wave remains, sealing off the continent to outsiders. 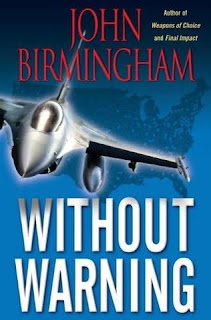 The United States government is annihilated, leaving its military - the overwhelming majority of which is on deployment outside the affected zone - leaderless. Hawaii, Alaska and the tiny surviving portion of Washington State attempt to keep the American flag flying, but the effective loss of the strongest nation on Earth is catastrophic. The world economy goes into meltdown and elements in the Middle-East, proclaiming the Disappearance to be a miracle, prepare for a cataclysmic showdown with Israel, now bereft of its most powerful benefactor and protector. Smoke from the burning American cities turns into a massive plume of toxic smog which encircles the northern hemisphere. As the weeks pass, ethnic tensions begin to tear France and the United Kingdom apart. Iran musters its forces to destroy the US forces in the Gulf. China's threatening moves towards Taiwan are abandoned when its internal economy, dependent on exports to the USA, collapses. Japan and South Korea finds themselves overstretched having to feed Hawaii. Australia and New Zealand are swamped by American refugees. Venezuela makes threatening moves towards the former US possessions in the Caribbean. Saddam Hussein, given a reprieve by fate, musters his forces for a renewed invasion of Kuwait as the coalition pulls out and begins to head home. The world is falling apart and it is up to a few people scattered across half the globe to begin the process of pulling it back together.

Without Warning is the first of a duology. The sequel, After America, will follow next year. This book had the potential to be both a thriller and sociological study, attempting to ask what would be the effects of the USA literally vanishing off the face of the globe. Unfortunately, this approach is undermined by the book's thriller side, which demands subplots involving a US intelligence agent fighting a clandestine extremist organisation in the streets of Paris and a pair of beautiful-and-tough female smugglers in the Pacific engaging in major gun battles and speedboat chases with sinister Mexican maritime warlords. Around the time that Britain seals its borders and begins forcibly deporting third and fourth-generation Muslim immigrants and Israel starts dishing out the nukes like they're going out of fashion, any claim the book had to seriously analyse what would happen to the world in the absence of the United States goes out the window.

What we are left with is a somewhat trashy, although still enjoyable, techno-thriller with a batty premise. It's all fun, but a bit on the forgettable side. This is a shame as the author's previous work, the alternate-history Axis of Time trilogy, was much more successful in exploring its premise (if the military leaders of WWII, particularly the Axis ones, knew in 1942 the future history of the war, what would they do to change the outcome?). Without Warning is entertaining hokum, but fails to answer its questions in any real depth.

Without Warning (***) is a fast-paced read which passes the time, but could have explored its premise a bit more effectively. The book is available now in the USA from Del Rey. A British edition isn't available yet, but imports are readily available on Amazon.co.uk.
Posted by Adam Whitehead at 22:19

Email ThisBlogThis!Share to TwitterShare to FacebookShare to Pinterest
Labels: john birmingham, without warning