The Braided Path by Chris Wooding

The Empire of Saramyr is vast, rich and powerful. The Blood-Empress Anais tu Erinima is one of the most powerful and respected rulers in Saramyr's history, and her rule seems secure. However, the nobility learns that Anais' daughter Lucia has magical powers, marking her out as an Aberrant. Amongst the people of Saramyr only the Weavers are allowed to wield magic in the service of the Empire, and Aberrants - especially women - are to be killed on sight. Anais' determination that her daughter will follow her onto the Imperial Throne splits the nobility and incurs the displeasure of the Weavers, and the seeds of civil war are sewn. 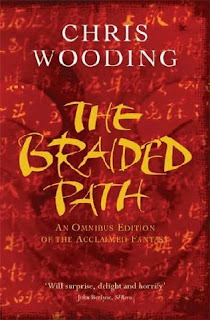 Meanwhile, a young woman named Kaiku and her handmaiden Asara are the sole survivors of a devastating attack that leaves her home in flames and her family murdered. Taking refuge in the wilderness, Kaiku learns that she also harbours the powers that mark her as an Aberrant, but as she travels through Saramyr, trying to find the secret her father unearthed that got him and his family killed, she gradually learns that the Aberrants are not the wanton forces for evil the Weavers have presented them as, and that the Empire is facing many threats to its existence from within and without.

The Braided Path Trilogy was originally published between 2003 and 2005, consisting of the novels The Weavers of Saramyr, The Skein of Lament and The Ascendancy Veil. In 2006 the three books were re-released as a thousand-page omnibus simply entitled The Braided Path. It's well worth tracking down the omnibus edition with its plethora of maps and a very handsome cover.

The Braided Path is an epic fantasy and contains all the requisite battles, political intrigue and memorable characters the subgenre demands. It also has some nice twists on the conventions of the genre. The technology level is higher than normal, with rifles and cannons coming into use, and the culture of Saramyr skews towards Asia by way of Renaissance Italy. The Asian feel of the books makes itself known in the types of monsters that appear, the use of spirits and spirit magic and the types of languages that are featured in the book. Given that Asian-influenced fantasies can easily turn into The Lord of the Rings But With Ninjas!, the author avoids that temptation and successfully gives the trilogy a rich atmosphere. 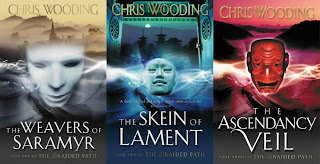 The trilogy is deftly paced, with an enormous number of characters, conspiracies, plots, subplots and factions featured in its relatively modest length (the entire trilogy is shorter than a lot of Steven Erikson's individual Malazan novels, for example). It takes the reader on a wild and enjoyable ride, and it certainly reminded me of how good epic fantasy can be in the right hands. In fact, alongside The First Law Trilogy, The Ten Thousand and The Lies of Locke Lamora, The Braided Path is probably the most outright enjoyable work of epic fantasy I've read in the last few years.

There are a few minor niggles with the book. Occasionally the prose feels a little too modern, and the use of the word 'genetic' at one point feels slightly out of place. Wooding also hints at many other places in the world where stories could be waiting to be told but doesn't expand on them, although it's more of a compliment that he makes the world a living, breathing place that feels like it existed before the story begins and is still there when it ends. American readers may also feel short-changed that the trilogy is not available, at this time, from an American publisher, although copies of both the trilogy and omnibus are available as imports from Amazon.com.

Email ThisBlogThis!Share to TwitterShare to FacebookShare to Pinterest
Labels: chris wooding, the ascendancy veil, the braided path, the skein of lament, the weavers of saramyr

Epic fantasy with asian background sounds promising.
The omnibus is also available at amazon.de
One more book for my list :-)