Long Ages ago, the Seven Shapers forged the world in accordance with the will of their creator, out of whose death they were born. However, Satoris the Sower refused the command of Haomane Firstborn and was named a traitor. For many long Ages Haomane and Satoris struggled, until the world was Sundered. The other six Shapers now dwell in the uttermost west, whilst Satoris finds himself constantly assailed by their servants in Urulat. 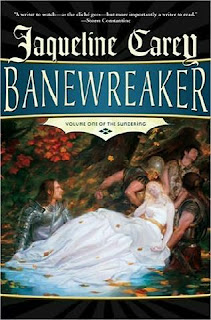 Tanaros, one of the Three and Satoris's most stalwart servant, is given an important mission. He must prevent Haomane's Prophecy from coming to pass by seizing the Lady of the Ellylon, Cerelinde, before she can marry the Aracus Altorus, the rightful King of the West. But this kidnapping itself may have set in motion the events that Satoris has long tried to avoid...

Read at a purely surface level, the plot precis of Banewreaker (the first book in the Sundering duology) sounds more than a bit familiar. But this is deliberate: in these two novels Jacqueline Carey launches a revisionist broadside at the works of J.R.R. Tolkien. At a very simple level, this is the story of The Silmarillion, The Hobbit and The Lord of the Rings (though chronologically mixed-up) as told from Morgoth's point of view (and, more overtly, the Witch-King of Angmar's, though Sauron also plays a role).

Of course, Carey reworks the names, concepts, races and ideas a fair bit so she doesn't get sued into oblivion by the Tolkien Estate, but these changes are hardly impenetrable, and it's still straightforward enough to work out who is who from the Tolkien mythos. At the same time, Carey imbues her characters with enough depth that they stand on their own two feet and after a while you start to forget the artistic intent behind the series in favour of its own narrative and storyline.

The Sundering is essentially an 'epic tragedy', and it's telling that each book opens with a quote from Paradise Lost. The duology is set in a world where there are two distinct sides, the 'dark' forces led by a fallen deity and consisting of an army of trolls led by 'fallen' Men, and a 'light' side led by stalwart heroes, noble Ellylon (elves with the serial numbers filed off) and a plucky innocent hero who has to take a magical trinket of enormous power (in this case, slightly oddly, a bucket of water) into the heart of enemy territory. The 'good guys' are also advised by a wise and powerful wizard who at one point undergoes an unexpected transformation. The story, spun by the wizard and his cronies, is that Satoris wrecked the world through greed and avarice, and continues to be responsible for all that is evil in Urulat. However, Satoris claims that he only desired freedom of voice and expression and was brutally supressed by the supposedly wise Haomane, who has incessantly pursued Satoris out of vengeance ever since.

The reader is invited to make their own judgement on the truth of the matter, mostly through the character of Cerelinde who is initially a paid-up supporter of Team White Hat. Arriving at Satoris's fortress of Darkhaven, she finds it guarded by fell trolls and maintained by an army of ugly and twisted minions...but the trolls turn out to be honourable and brave warriors, and the minions are outcasts turned out from the world of Men and Ellylon who have been given shelter by Satoris and are treated kindly. As the book progresses, Cerelinde finds herself questioning her own rote acceptance of the written version of history, but at the same time Satoris and his own minions, attacked once again by their enemies, find it difficult to resist becoming what Haomane's PR makes them out to be, evil and destructive monsters.

It's a clever idea for a book, going beyond the mild revisionist intent of Tad Williams' Memory, Sorrow and Thorn (where he merely gave his dark lord a motivation, but didn't attempt to justify the evil he'd still carried out), but the book cannot survive on its intent alone. As an individual work with its own storyline and characters, Banewreaker is satisfying and well-written, with Carey managing the trick of echoing Tolkien's prose style without slavishly following it (and thankfully not even attempting any poems). Events build to a tragic conclusion as an epic battle is fought between two sides where both are in the right and in the wrong, and the stage is set for a bigger confrontation to come in the concluding volume of the story, Godslayer (although the actual ending of the book is a little random, the result of this being one long novel split in two and not two separately-written instalments).

Banewreaker (****) is an intelligent and refreshing take on the traditional epic fantasy novel and is a well-written and enjoyable story in its own right. It is available now in the USA and on import in the UK.
Posted by Adam Whitehead at 21:01

Thanks for reviewing this. I bought it on my iPad a while ago but haven't ever gotten around to reading it. I keep meaning to, but after seeing that you enjoyed it, I think I'll get to it sooner.

Hi Wert, always appreciate your reviews. May have to look at this one.

Have you read Carey's Kushiel books? Just curious if those are worth reading.

I started one of them and it didn't do much for me. It wasn't the first one though, so that may have been the problem. I may check them out again at some point.

Completely agree, I really enjoyed this duology. Always nice to read these kinds of reviews - a positive review about a book I loved. :)

read this long time back,still remember some of the scenes from the books,guess that means it was good,lol.

Thanks for the review Adam.

Adam ,whatever happened to the release of A King in Cobwebs by David Keck ?do u have any info ?

Well, I usually agree with you but this was just god-awful. Great idea, bad execution and that's me being nice.
Still, like to read you reviews, even when they don't reflect my own.

Thanks for the review. Unfortunately, I just couldn't get into this book. I found the premise intriguing but characters less so, and good characterization is a must for me.

Also, I felt that the prologue was unnecessary and in fact limited the possibilities somewhat. Wouldn't it have more interesting if the readers had to pick up the background on their own? In that section, Carey basically tells us "Satoris genuinely believes he was wronged", but I think it would have been better to let the readers make their own judgments.

I'm glad I read it, though; even if I don't agree with the choices an author makes, I appreciate the opportunity to experience them. Thanks for giving it a spotlight.