GAME OF THRONES beats DOCTOR WHO to a Hugo Award

In a surprise result, Game of Thrones proved victorious at Worldcon at the weekend. It seized the Hugo for Best Dramatic Presentation (Short Form), an award that traditionally goes to Doctor Who. Doctor Who has won the award in six of the previous seven years (missing out in 2009 only to Doctor Horrible's Sing-Along Blog) and was widely expected to win again this year. 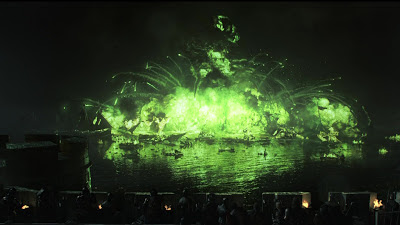 Doctor Who's failure to win can be ascribed to a lower number of episodes overall, the fact that those episodes were largely awful, or to the radical increase in the popularity of Game of Thrones, which has swelled to become one of the biggest shows on television (whilst Who has been in a modest ratings decline in the UK). Whilst the second season of Thrones did not win as much critical approval as the first (or third), it was still well-regarded. The episode that won, Blackwater, is also widely-acknowledged as the finest episode of the series to date. 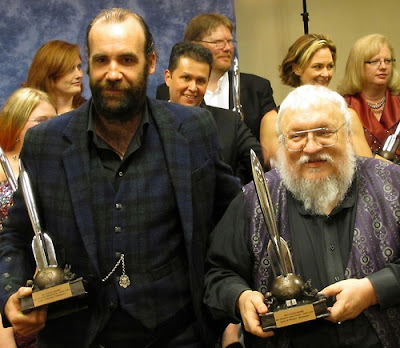 George R.R. Martin wrote the episode that won the award, making this his sixth Hugo Award overall and the third for A Song of Ice and Fire, following the Hugo Award for Best Novella in 1997 for Blood of the Dragon and the Hugo for Best Dramatic Presentation (Long Form) for Season 1 of Game of Thrones (shared with the writers and producers) last year. George R.R. Martin accepted the award along with Rory McCann, who plays Sandor 'The Hound' Clegane in the TV series.
Posted by Adam Whitehead at 17:38

I don't believe this is true. Almost every review I have read said that the second season was stronger than the first. Season two won "Program of the Year" at the Television Critics Association Awards last year. Seasons one and three didn't.