On the Steel Breeze by Alastair Reynolds

Portgual, 2365. Chiku Akinya is one of three clones, and the only one to remain on Earth. One of her 'sisters' is on a dangerous space mission to the edge of the Solar system, trying to recover a deceased relative. Another is on a massive holoship, more than a dozen light-years from Earth, headed to investigate a giant alien artifact picked up by a powerful space telescope. But some strange events compel Chiku to venture to Venus and Mars, and what she discovers will have important ramifications for her sisters far out amongst the stars. 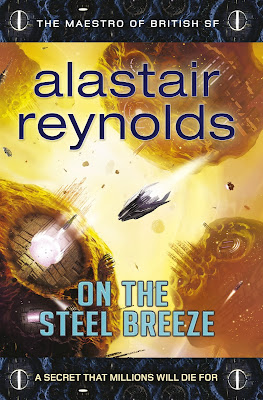 On the Steel Breeze is a semi-sequel to Blue Remembered Earth and the middle volume of the loose-knit Poseidon's Children trilogy. Though readable as an independent novel, a number of references in this novel will resonate more if you have read the previous book.

As before, the book unfolds from the point-of-view of the Akinya family, a dynasty that became rich due to the explosion in Africa's economy. Chiku is the daughter of Sunday, one of Blue Remembered Earth's protagonists, and the novel is told from her fractured POV as memories are shared between her three different bodies. The two main characters are Chiku Yellow, who remains in the Solar system, and Chiku Green, who is living on the holoship (a hollowed-out asteroid fitted with engines and life-support equipment, carrying 10 million people to the planet Crucible) Zanzibar.

The result is, effectively, two SF novellas that unfold simultaneously, with each 'sister' updating the other on what's going on through lengthy radio transmissions that allow them to update and integrate each other's memories, thus giving them a clearer picture than what each individually would be able to find out. There are echoes here of Reynolds's earlier House of Suns (which featured a woman splintered into different incarnations), as well as the Revelation Space books which featured storylines unfolding light-years apart with the speed of light limitation making it difficult for people to communicate with one another. The two stories feel rather different to one another, but ultimately integrate into a mostly satisfying whole.

Chiku Yellow's storyline takes in 24th Century Earth, attempts to explore the planet Venus (complicated by the planet's hellish surface conditions) and visits to Mars and Saturn. Some elements (and characters) from Blue Remembered Earth are revisited in these sequences. This section is enjoyable, but risks retreading the same ground from the earlier novel. This is mostly averted by some excellent descriptions and use of real science, especially in the disaster-movie storyline that unfolds on Venus.

The meat of the story, however, is in the holoship caravan making its way to Crucible at 13% of lightspeed. Here Reynolds lets his imagination have full reign, creating an interstellar society that is trying to survive the agonisingly slow journey without collapsing. There are evocative descriptions of how the holoships work and how they are organised, as well as intimations of their politics. However, a fuller exploration of the caravan is not possible due to a constrained page count and the need to flip back to the other narrative at key points. This helps keep the story on track and focused, but it does result in some lost depth to the Zanzibar storyline. Most notably, a climax to that storyline revolving around the complex politics of both the holoshop and the caravan as a whole lacks resonance due to those elements not being explored in greater detail earlier.

Reynolds admirably raises the tension and stakes as the story switches back and forth across the light-years, building up the narrative drive in a way that Blue Remembered Earth rather lacked. However, this tension is then dissipated by an undercooked finale: Chiku reaches Crucible, some fascinating events unfold there and the book rather abruptly ends. I'd hesitate to call it a cliffhanger, but there's a lot of unresolved events and elements left for the final book in the series to address. It also doesn't help that the main theme of the series (strongly hinted at in the first volume) seems to be the struggle between organic life and the machine life it creates. This is not a new theme for Reynolds (it was also explored in the Revelation Space series) and he comes at it from a different angle here, but those who have watched the new Battlestar Galactica TV series or played the Mass Effect video game trilogy may find themselves groaning at the re-use of a very familiar trope. How successful Reynolds is in putting a fresh spin on it remains to be seen, as it appears to be an idea which will be explored more in-depth in the third book in the series.

On the Steel Breeze (****) is a fine hard SF novel that explores some interesting and intelligent ideas. The book's two-part structure allows for a lot of story to be explored efficiently, but also results in some elements not being as fleshed-out as might be desired. In addition, the ending is abrupt and there is no guarantee that the next book will explain much of it (the third book, it is rumoured, will pick up thousands of years later). It's still a fascinating novel and for much of its length is a better book than Blue Remembered Earth, but it also definitely suffers a bit from 'middle volume syndrome'. The novel is available now in the UK and next year in the USA.
Posted by Adam Whitehead at 13:26

In talking with Alistair on twitter, it does seem he intended this to be read alone.

The fact that we colonials can't even get this easily is another problem altogether.

I'd just like to point out that Revelation Space was published in 2000, four years before the Battlestar Galactica reboot and the better part of a decade before the first Mass Effect game.

In fact, Mass Effect's "Reapers" are essentially Reynolds' Inhibitors from the Revelation Space series, in the form of giant space lobsters instead of night-black, inscrutable killing machines. The Reapers and their motivation are lifted straight from RS -- a machine intelligence that wipes out starfaring civilizations in order to "save" the wider galaxy from inevitable, destructive war by organics. Mass Effect itself was/is a mash-up of lots of great science fiction, with nods to Niven, Banks, Heinlein and others over the three-episode narrative.

As for On The Steel Breeze, while I love me some Reynolds, some sections of the book were slow, and the ending left me disappointed. It's almost like AR skipped out on writing the ending and went straight to the epilogue. I know some of that can be attributed to the fact that AR's holding some things back for the third volume, but it still felt like too much was left out. (We learned nothing about Mandala, and the much-anticipated encounter with the Watchkeepers took place "off camera" as it were.)

And FWIW, I always find plotlines involving politics incredibly tedious, unless they're done with Wire-esque deftness. I didn't know anything about the other holoships, their leaders, or their citizenry, and as a consequence I didn't care much about their squabbling. Maybe my perspective will change if I give it another read before the third "Poseidon's Children" book comes out, but after finishing the book I feel like it's my least-favorite AR effort since Century Rain. And I like AR's stuff A LOT, so that's saying something. Then again, a "weak" effort from AR is still better than any other SF novelist except maybe Banks, in my book.