Fantasy author Melanie Rawn has confirmed that she is planning to finally write the third and concluding volume of her Exiles Trilogy, The Captal's Tower, some seventeen years after the previous volume was released. 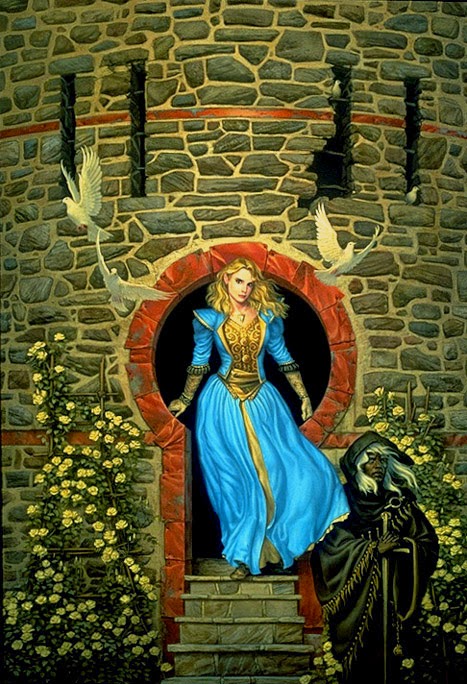 Rawn began work on the Exiles Trilogy in the early 1990s, releasing The Ruins of Ambrai in 1994 and The Mageborn Traitor in 1997. Rawn's mother, who also served as her first test reader and sounding board for ideas, passed away after this point and Rawn gave up writing for nine years, returning with a new trilogy, Spellbinder, in 2006. The author said she needed a new project to recharge her creative batteries before completing the Exiles Trilogy. However, after Spellbinder and its sequel Fire Raiser were published, the new trilogy was cancelled due to poor sales. Rather than return to the incomplete trilogy, she wrote The Diviner (the long-planned sequel to her 1996 collaborative novel, The Golden Key) and then embarked on a new series, Glass Thorns, a move which irritated many of her fans (not to mention generating substantial commentary on this blog).

Three books have been published in the Glass Thorns sequence: Touchstone, Elsewhens and Thornlost. A fourth volume is completed and due for publication next year, and Rawn is working on a fifth volume. However, she has promised that once that is complete, her next project will indeed be The Captal's Tower. Her statement:


"Yes, I will write Captal’s Tower. I’m very sorry it’s taken so long. My sincere thanks to all of you who have been so patient. I’m currently writing the fifth book in the “Glass Thorns” series, and after that my plan is to get to work on Captal’s Tower. If anything about that plan changes, I’ll post on my website."


Good news, following a long period with no news at all (and some ill-advised jabs at fans wondering where the book was in her Spellbinder novels). When The Captal's Tower is released I will finally be able to read the whole trilogy and see what all the fuss is about.
Posted by Adam Whitehead at 20:59

I really, really hope this comes to pass.

Her Dragon Prince sequence was what brought me into fantasy as a teen, and kickstarted my life as an avid reader.

I'm treating this news with cautious optimism - I have written off ever seeing this story to completion.

Sounds like, best case scenario, it is a 2017 publication.

She's a good writer, though a bit too in love with detail. Glad to hear she's working again. Wow, 9 years without a book. I think I'd go mad. I'm already halfway there, as is.

I also hope that this happens. I really enjoyed the first 2 books of the trilogy and always wanted to read the 3rd. If it does happen I'll need to go back and reread, because it was years and years ago when I first read them.

Great news! Hope this will happen. Did you have a chance to talk to her or where did you find the info? I wasn't able to google it yet or find it on a website.

Well it is 2017 and still no Exiled Vol. 3. I use to dread ha ing to wait 2yrs in between some of my favorite writer's books. I have now been waiting 20 years for this to come out. I'm sorry she has had some big bumps along the way in her life. But sometimes you just have to get back up there and finish what you started. It might actually help to get over what caused the issue in the first place. I know that I will not buy any of her books except The Captols Tower. If she ever does get it done. Maybe should have someone help finish it like Margarete Weiss. They write very similar and maybe less detail and more story. Hope she gets it done. I have a feeling it will really hurt her customer base If she doesn't finish it. If not for herself than maybe for us that have stuck around.

Well it's 2018 and still no Captals Tower= Sad Panda

Remember, she promised after the 5th Glass Thorns book. Perhaps this time she will honor her word. I doubt it seriously, but a small flare of hope is still alive that I will be able to curl with my old friends and find closure.

Debating whether or not to wait for the Captals Tower or should I give the first two books of Exiles to a charity bookshop? Still clinging on to the hope I can reread them to take me easily into the final chapter. Is my hope misplaced??