Walter White's drug manufacturing sideline is taking over his life. He has separated from his wife (who now knows his secret) and has a new employer, Gus Fring, who is initially amiable but soon reveals himself to be ruthless and dangerous. However, Walter's colleague and friend Jesse is becoming unreliable, his lack of concern proving a danger to himself and to others around him. 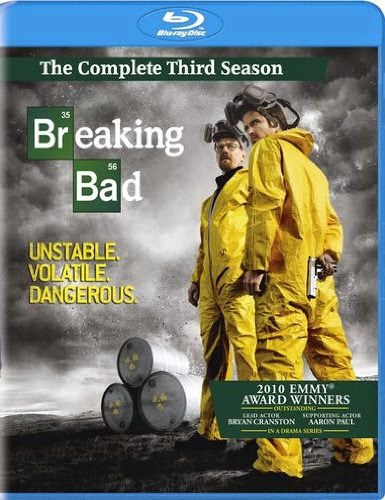 The third season of Breaking Bad continues in just as confident and assured a style as the previous year. The show opens with the aftermath of the air crash over Albuquerque, a plot development that was a little too contrived and is quickly brushed under the rug (although not before Walter gives a startling and darkly humourous speech to his students about how it was "only" the fiftieth-worst air disaster in history). The following episodes set up Walter and a reluctant Jesse in their new "superlab" and show them now having a day job, with Walter even making himself his sandwiches before going to work. It's all funny stuff, contrasted with a more serious subplot in which two terrifyingly blank-faced assassins arrive in town to kill Walter.

The season takes a few episodes to really kick into gear, but then ups the ante with One Minute, when Hank is brutally attacked by the assassins in a parking lot, resulting in a stand-off and shoot-out that must rank among the more intense gunfights ever put on the small screen. Another episode, Fly, is remarkable in its attention to detail and character and moving the emotional stories of the characters along whilst being almost completely confined (for budgetary reasons) to the lab set.

But the season really triumphs with the last two episodes, in which Gus's relationship with Walter and Jesse moves onto a less friendly footing, an innocent man is killed and Walter's desperation drives him to increasingly ruthless and amoral acts. The writing is powerful and the acting is excellent, with Giancarlo Esposito and Jonathan Banks being promoted to regulars as Gus Fring and his highly capable fixer, Mike Ehrmantraut. Both actors deliver stand-out performances to match the already-established regulars.

The season also succeeds in showing the growing moral decline of Walter as he becomes more ruthless and starts the same process with Skylar, as she is initially disgusted by Walter's activities but later is happy to use his money to pay for Hank's medical bills, the start of her own gradual corruption by money. The way the subplots and themes all feed into one another and the characters so everything makes sense has become highly impressive by this point.

The third season of Breaking Bad (*****) improves on and evolves the story from the first two, becoming more epic and confident with every passing episode. Season 3 is available now as part of the Breaking Bad Complete Collection in the UK (DVD, Blu-Ray) and USA (DVD, Blu-Ray).
Posted by Adam Whitehead at 18:02

I finished S3 last weekend and thought it was easily the weakest of the 3 so far.

Jessie and Walt both become unlikable assholes and it's 13 episodes of nothing happening.

Hank was the only character left at the end of the season that was even remotely likeable.

Allan, I don't think Walter and Jesse are SUPPOSED to be likable. They're committing horrible crimes for not particularly good reasons.

I don't know that the main characters in a show have to be likable. As long as they're interesting and realistic, I'm happy. The kind of material depicted in Breaking Bad isn't for everyone, but I find it endlessly intriguing to watch these characters be corrupted by greed and driven to unspeakable acts. The ways they justify it to themselves and those around them is what the show's all about.

If there not be likable characters bothers you, I don't think you'll like Seasons 4 or 5 very much.

But hey, Walt Jr. will always be likable! And the kid's got a great taste in breakfast food.