The Abyss Beyond Dreams by Peter F. Hamilton

AD 3326. Nigel Sheldon, the originator of wormhole technology and the person responsible for the creation of the Intersolar Commonwealth, is semi-retired and planning to leave this galaxy for a new one. However, his plans are interrupted by the enigmatic Raiel, the powerful aliens who guard the Milky Way from the expansion of the Void, the mysteriously growing mini-universe hidden in the galactic core. The Raiel need Sheldon to go into the Void and help recover one of their ancient warships. Sheldon agrees...but soon finds himself on the wrong planet in the wrong time and the only way out is to support a full-scale revolution. 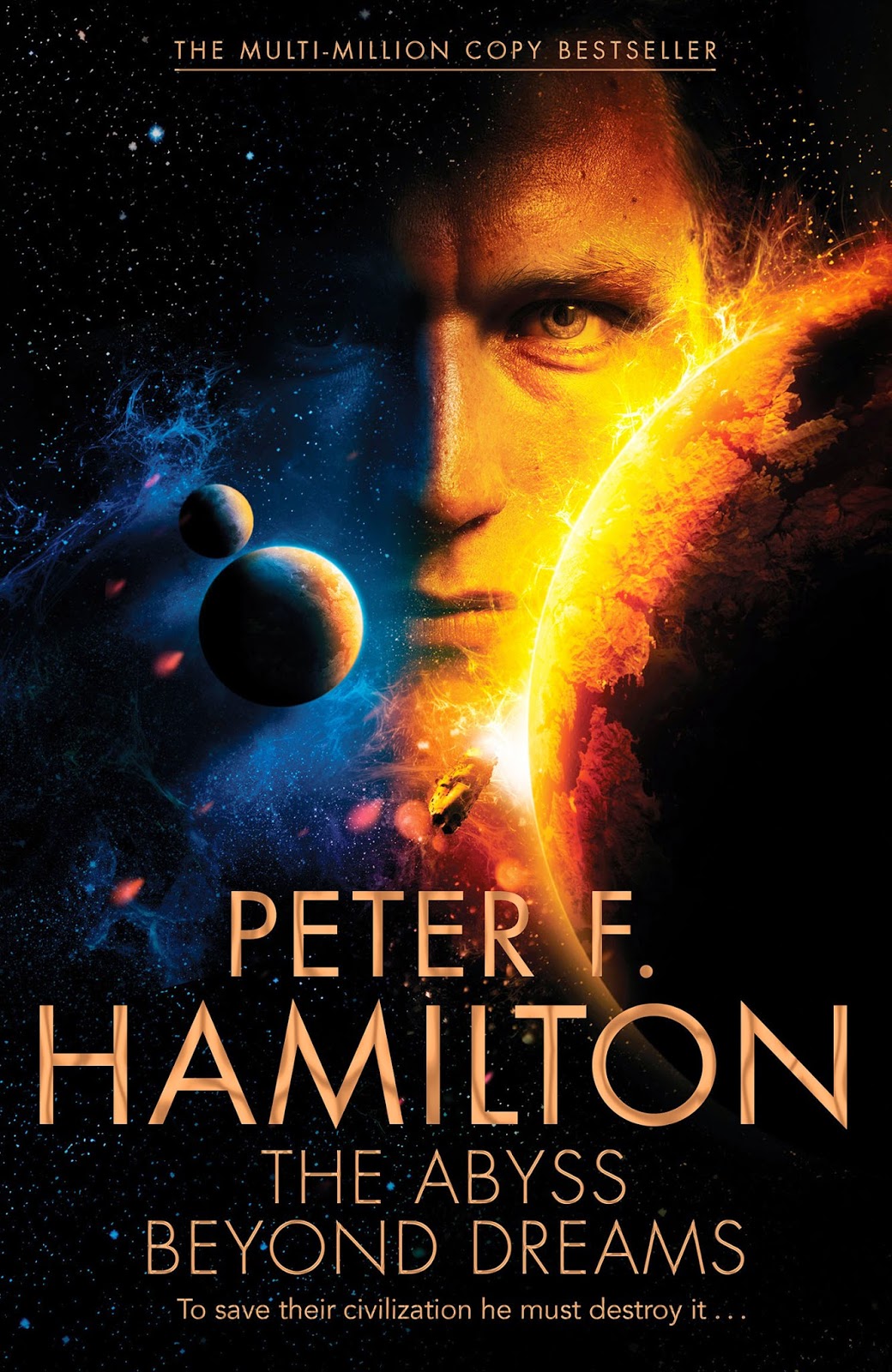 The Abyss Beyond Dreams is the first novel in a duology, to be followed by Night Without Stars. This series, The Chronicle of the Fallers, is the latest work in Peter F. Hamilton's Commonwealth universe. Familiarity with the previous works in this universe (the Commonwealth Saga duology and the Void Trilogy) is recommended as this book contains spoilers for the earlier ones, but is not strictly essential.

As with the preceding Void Trilogy, this novel is divided into two sections and almost two distinct genres. In the opening sequence we have far-future SF, set thirteen centuries hence when humanity is immortal, can cross the galaxy in a matter of weeks and live any kind of life imaginable. The bulk of the book is set within the Void itself, where high technology does not work but the inhabitants gain the powers of telepathy and telekinesis. Whilst the Void sequence was set on Querencia, which was more of a fantasy setting, the Fallers books are set on Bienvenido. Unlike Querencia, where a lot of history was lost after the human refugees settled on it, Bienvenido has maintained more of a history and identify, as well as a slightly higher level of technology. This gives the novel more of a steampunk feel, allowing Hamilton to mix up some more genres.

The Abyss Beyond Dreams starts off by feeling a little bit too much like The Dreaming Void. One of our primary POVs is Svlasta, a soldier wounded in battle with the mysterious Fallers (hostile aliens who can assume human appearance) who soon becomes the architect of social change. The similarities with Edeard's story in the earlier books are uncanny. However, Hamilton is clever enough to subvert the reader's expectations and soon moves off in another direction. It's not long before we're meeting some clever (and very conscious) Russian Revolution parallels and seeing how all revolutions carry within them their own capacity for self-destruction.

As usual, Hamilton's prose is unornamented but highly readable. His characters are well-delineated, although they're all a little too prone to using British swear words and idioms. The book is structurally similar to the Void novels but this is deliberate and soon used to set up and then undercut expectations in an interesting way. There are a few complaints, however. One of these is how quickly the ending unfolds (bordering on the abrupt) and how rapidly one of our main characters descends into outright madness. Whilst foreshadowed earlier on, the actual transition feels a little too rapid.

Another is only an issue for long-standing fans. The Commonwealth universe is undeniably a fascinating place, but we've now spent four (out of a planned five) big novels on the subject of the Void. Given the size and variety of the Commonwealth, it would be nice to see more of it than this same bit of it. I can see the fascination, as it allows the author to experiment with different genres without having to fully abandon his SF roots to do it, but there is the feeling that it would be nice to wrap up the Void and move on. The next book in the series will hopefully do just that.

Otherwise, The Abyss Beyond Dreams (****) is a very solid Hamilton SF novel: big ideas, fun characters and affecting moments of gut-wrenching horror. The novel is available now in the UK and USA.
Posted by Adam Whitehead at 15:33

Email ThisBlogThis!Share to TwitterShare to FacebookShare to Pinterest
Labels: peter f. hamilton, the abyss beyond dreams, the chronicle of the fallers

In the approach to this coming out I decided to re-read the first two Commonwealth novels and I have to say I enjoyed them tremendously. So I'd have to agree that the Commonwealth definitely has a lot to offer.

The first Void series though... I think the fair future setting with it's quantum wave signature fleets, ultra drives and so on, blurs the line between sci-fi and fantasy, which makes the juxtaposition between the Void/Not Void sections less clear.

Setting the Abyss Beyond Dreams earlier in the continuity makes some of the science employed seem more like science and less like magic with scientific names attached, so that immediately interested me more.

Can't wait for the second book, which isn't something I thought I'd say after what I thought was a disappointing announcement that Hamilton was returning to the Void :)

I am a big fan of Hamilton, especially the Commonwealth stuff. Overall, I rather enjoyed this book, though it did feel somewhat repetitive at times.

I agree, it would be nice to see more stories told in the Commonwealth Universe that did NOT include the Void. Perhaps some tales about Mellanie and Orion? More Justine? Or, best of all, lets have some more Paula Myo please!

I give this book 17 out of 23 stars. (bonus points for anyone who gets that joke).