The Dendarii Mercenary Fleet has pulled off its most audacious operation yet, a mass prison break that has liberated hundreds of enemies of the Cetagandan Empire. The furious Cetagandans have pursued the Dendarii across the known worlds, forcing them to take refuge and resupply at one world even the Cetagandans hesitate to cross: Earth. For Miles Vorkosigan it's time to resupply his troops and check in with his day job as an officer in the Barrayaran military...but it also brings him into contact with rebels determined to destroy Barrayar and have a most unexpected way of doing it. 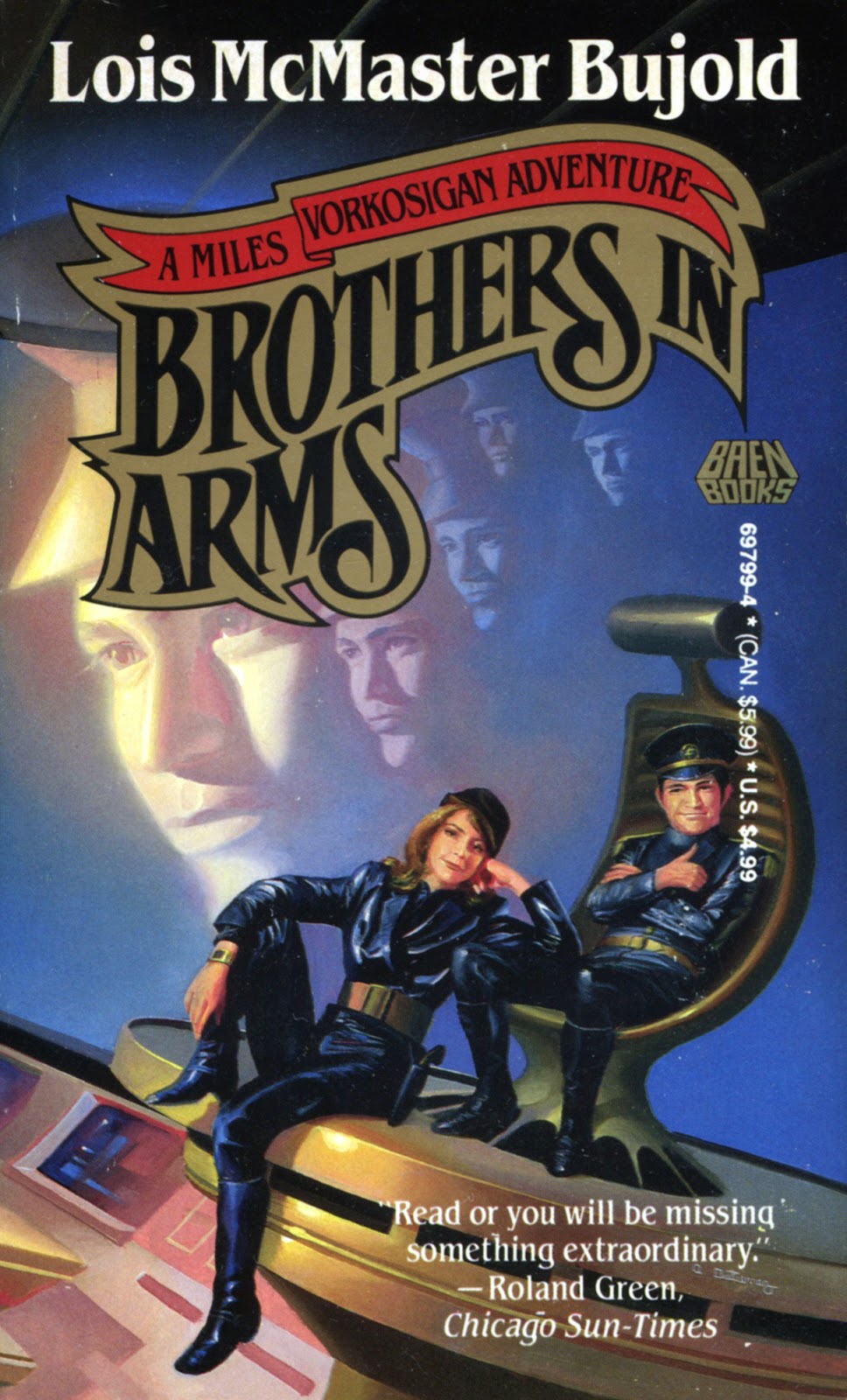 Brothers in Arms is the fifth novel by publication order (or eighth, chronologically) in The Vorkosigan Saga, Lois McMaster Bujold's award-festooned series following the misadventures of the genetically misshapen and crippled Miles Vorkosigan as he tries to rise through the ranks of the Barrayaran military. This latest novel expands on the Vorkosigan universe by taking us to humanity's homeworld.

The novel is divided into two sections. In the first Miles has to confront the problems posed by his actual job as an officer for Barrayar's navy and how this conflicts with his cover role as Admiral Naismith, commander of the Dendarii mercenaries. There not being too many prominent genetically-challenged dwarfs around, the rising fame of Vorkosigan in both these roles has led many to conclude they are the same person. With the value of the cover unravelling, Miles faces the unpleasant possibility of having to give up the Dendarii, a role he has come to thoroughly relish. Miles soon comes up with a bonkers plan to allow his cover to continue...which then becomes insanely complicated when it turns out that his randomly-conceived cover plan isn't too far off from the truth. The wheels-within-wheels plans, deceptions and machinations that Vorkosigan comes up are hilariously over-complicated (to the befuddlement of his friends and crew) and it's great to see them in action.

As well as the comedy and some very effective action set-pieces, including a memorable concluding battle at a supermassive SF version of the Thames Barrier, there's also some major steps forward in character development in this book. Miles realises how much the Dendarii have come to mean to him and several moments where he genuinely trips up on what role he is supposed to be inhabiting are quite powerful. Maybe he's in too deep? There's also the anguish over Miles's lack of immediate family, and when this appears to be rectified Miles latches onto it with horrifying lack of forethought, but moved by a powerful emotional need for peers to relate to. It's fairly straightforward stuff, but Bujold's ability to tell familiar stories through a fresh perspective serves the narrative well.

Brothers in Arms (****) is a very solid novel, with some good action and laughs framing a more serious story that does a lot to advance Miles's character and the overall storyline of the series. The novel is available now as part of the Miles Errant omnibus (UK, USA).
Posted by Adam Whitehead at 16:13

Now, now, Wert... You know that Miles' damage is teratogenic, not genetic! It's very important to him that you know that! :-)