Game of Thrones producers David Benioff and Dan Weiss have confirmed that there are, at best, 15 episodes of the series left, and possibly as few as 13. 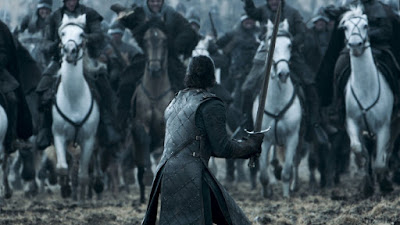 It's unclear if future seasons will see Jon Snow continue to make tactically unwise decisions which turn out okay at the last minute thanks to the intervention of other factors and is then inexplicably rewarded afterwards.

Benioff and Weiss have been talking for a while now about ending the series with two shortened seasons, with a clear preference for a seventh season next year of seven episodes and then a final season in 2018 with six episodes. This would allow them to focus and concentrate more resources, finances and filming time on the events of these episodes, which are expected to be huge in scale and scope. HBO's preference appears to be for at least two full 10-episode seasons and clearly discussions have been going on for some time over a solution. Last month HBO renewed Game of Thrones for a seventh season, but not an eighth, leading to speculation that perhaps they were even discussing a larger-than-normal seventh season, perhaps airing later in the year to conclude the series in one go. However, this seemed unlikely as HBO would prefer two event seasons in two subsequent financial years, especially as they don't have a new series on the drawing board likely to replace Game of Thrones in the zeitgeist.

HBO has yet to officially comment on how many episodes will be in the seventh season. With that writing of the scripts for the seventh season already complete and filming due to start in a couple of weeks, this will have been finalised some time ago, so it's just a question of when they want to confirm it.
Posted by Adam Whitehead at 14:36

Why would they have more resources with fewer episodes? Time, yes, money, no. If next season will be 7 episodes, they won't receive a budget for 10 episodes.

There's a good chance they will. HBO have basically said they'll give the production whatever they need. They're not going to go completely crazy (by giving say $50 million per episode) but they're not going to start skimping on the show, especially on it heading into its endgame.

Also, time is money. If the production and post-production periods have the same amount of time as previous seasons, they will end up costing the same.

What the production needed since season 4 is a different team of writers and directors. And some direwolves.