In 1993, shortly after the launch of Star Trek: Deep Space Nine, Paramount Studios held a discussion with Rick Berman. Having two Star Trek TV shows on the air at the same time had proved to be unexpectedly successful, so they requested that Berman and his team produce a new series to directly replace Star Trek: The Next Generation when it concluded in the spring of 1994. Despite the prospective rigours of running two productions simultaneously for many years to come, Berman agreed to sit down with his writers and consult on ideas. 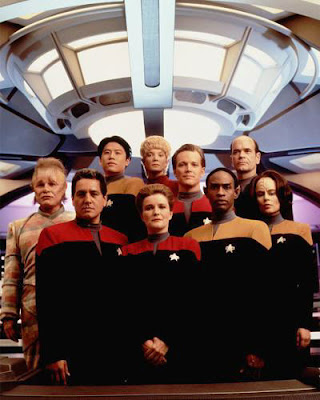 The cast of Star Trek: Voyager during its first season, which aired in 1995.


As with Deep Space Nine, Berman brought Michael Piller in on the discussions. Both were keen that the new series should have a female protagonist and involved TNG writer and producer Jeri Taylor in their meetings. Taylor's influence and suggestions became key, and she was officially credited as the co-creator and executive producer of the new series. They also decided that the new show should involve a starship, as a contrast to the station-bound DS9, but wanted something different to TNG. In particular, they were aware of the occasionally-voiced complaint that TNG spent very little time in all-new or unexplored space, "boldly going where no-one had gone before." They hit on the idea of stranding a Federation starship thousands of light-years from Federation territory and having to spend years getting home through uncharted space, with no starbases, friendly ships or allies to call upon.

The producers were concerned, as they had been on DS9, by Gene Roddenberry's maxim that there should be no interpersonal conflict between the Starfleet crewmembers. To overcome the hurdle, they decided that the crew of the new ship would be partly made up of members of the Maquis, a freedom-fighting organisation that had been resisting a peace treaty calling for several Federation colonies to be turned over to the Cardassians. The Maquis were set up during the closing episodes of TNG and throughout DS9's second and third seasons. This sense of conflict was enhanced by the addition of natives from the Delta Quadrant to the crew and the reintroduction of the Vulcans as a regular race, through crewman Tuvok. The producers were also keen to explore the notion of holograms and Starfleet computers being able to create true AI, so added the character of the Doctor, an emergency medical hologram who develops intelligence and apparent sentience as the series progresses.

The new ship was dubbed the USS Voyager and was described as a lot smaller than the Enterprise-D of TNG and less combat-focused than DS9's Defiant, but also a lot faster and more manoeuvrable than either. It was also focused more on exploration and science, a return to Star Trek's core principles. 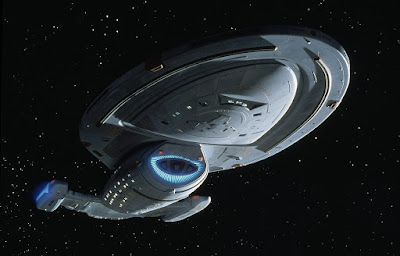 The USS Voyager was a smaller ship than the Enterprise-D but was also more flexible and a faster design. The ship soon drew derision for its apparently infinite supply of shuttlecraft and for its pristine appearance even after seven years in deep space with no servicing or refitting.

Shooting of the pilot episode began over the summer of 1994, with Genevieve Bujold cast in the role of Captain Nicole Janeway. However, Bujold was unprepared for the intense time schedule of making a weekly television series and dropped out on the second day of shooting. Production moved to other characters whilst the producers scrambled to find another actress. Kate Mulgrew, who had been on their shortlist for the role, was fortunately still available and came on board. She suggested changing the character's name to "Kathryn", to which the producers readily agreed. Most of the rest of the cast were relative newcomers, aside from Robert Picardo, an experienced supporting actor in film, who was cast as the Doctor. Robert Duncan McNeill was initially cast as Nicolas Locarno, who had appeared in the ST:TNG episode The First Duty as a disgraced Starfleet cadet. When it was realised that using Locarno would have meant paying royalties to The First Duty's writer on every episode, he was changed to the near-identical character of Tom Paris, to the initial confusion of many Star Trek fans.

The first two seasons of Voyager dealt with the ship being hurled into the Delta Quadrant, 70,000 light-years from Federation space, and having to negotiate its way through various hostile species, most notably the Kazon. However, fan reaction to the Kazon was negative and it was decided that, as an enemy species, they had not done enough to distinguish themselves from the standard, generic hostile Star Trek alien race. In the third season the Voyager left behind Kazon space and instead approached Borg territory. Although canon had previously established that the Borg were based in the Delta Quadrant, the producers had initially been reluctant to use them for fear of diluting their aura of indestructibility (the same rationale that saw them used only sparingly on TNG and not at all on DS9). With the Kazon a bust and Voyager's critical reception being lukewarm, it was decided that they would be brought on board in force at the end of the third season. The writers were helped by the movie First Contact, which refreshed the Borg with new ideas and concepts (such as the Borg Queen and nano-assimilation) they felt they could explore in greater depth.

Michael Piller departed Star Trek altogether at the end of Voyager's second season, with Jeri Taylor promoted to replace him. The third and fourth seasons, which reintroduced the Borg and a new, even greater threat called Species 8472, were judged successful. The transition from model-based effects to CGI (courtesy of Digital Muse and the ex-Babylon 5 Foundation Imaging team) also allowed for much more ambitious stories and non-humanoid aliens to be realised. Particularly successful, especially from a marketing perspective, was the introduction of a new, recurring Borg character, Seven of Nine, played by Jeri Ryan. 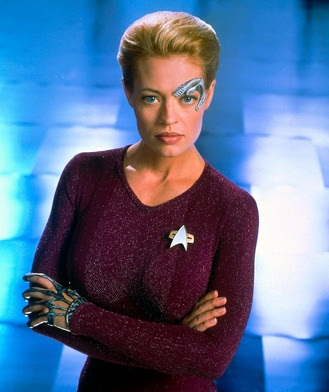 The premature cancellation of the excellent Dark Skies in 1997 allowed Jeri Ryan to join Star Trek: Voyager as rescued Borg drone Seven of Nine. Her arrival sparked a brief creative resurgence in the series, as well as Paramount using her for a renewed marketing drive. Ryan's performance was excellent but the studio's focus on her appearance and sexy outfits was regarded as a lowpoint for the franchise.

However,  the introduction of Seven saw the departure of regular character Kes (Jennifer Lien) and a gradual shift in the writing focus of the series, as more and more episodes switched their attention to Janeway, the Doctor and Seven. The rest of the crew had fewer and fewer storylines. This particularly offended Robert Beltran, playing the role of Commander Chakotay, the nominal first officer and second-in-command of the vessel.


"I just felt let down, ignored and insulted. I think they did a grave disservice to what I thought could have been an interesting character."

Famously, Beltran soon became outspoken about what he felt was being done to the other castmembers at conventions. This was also joined by rumours of a reported on-set coolness between Mulgrew and Ryan, and growing disputes amongst the writers about the future direction of the series. When Deep Space Nine ended in the spring of 1999, Ronald D. Moore joined the writing team of Voyager. He was extremely keen on messing up the dynamics of the show and depicting the Voyager getting more damaged the longer it went without servicing and the crew being forced to make harder moral decisions to keep the ship flying. However, his suggestions were shot down by Brannon Braga, who had taken over as showrunner (under Rick Berman's overall direction) in Season 5. Moore wrote two episodes for Voyager but ultimately only lasted a few weeks before quitting. He later took many of the ideas and plans he had for the show and instead applied them to the superficially similar but ultimately vastly superior Battlestar Galactica reboot which ran from 2003 to 2009. 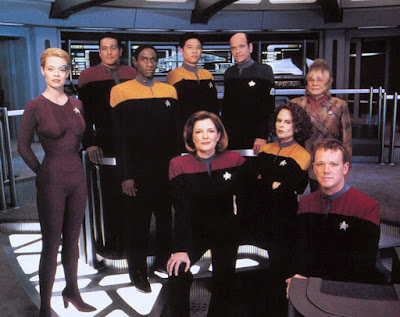 The cast of Voyager during the seventh and final season, which aired in 2000-01.

A key debate within the fan community was whether Voyager should return to the Alpha Quadrant before the end of the show, with the fate of the Maquis characters and the ramifications of Voyager's actions (particularly its inflicting of several defeats on the Borg) providing a rich seam of new stories to tell. However, Braga and Berman ultimately chose to keep the show in the Delta Quadrant right up to the series finale in 2001, when it abruptly returned home thanks to some time travelling shenanigans. Unlike the triumphant, well-received ends to both TNG and DS9, Voyager ended on something of a damp squib of disappointment and cliche.

As Voyager began drawing to a close, Rick Berman proposed that Star Trek be rested for several years to recover from what he called "franchise fatigue" and for it to return with a radical new concept and idea. Paramount, however, wanted to maintain the momentum of the franchise. They asked Berman and Braga to submit ideas for a new series to pick up immediately after Voyager and, despite fearing the well had run dry, they began drawing up ideas.
Posted by Adam Whitehead at 13:13