In May 2001 Rick Berman and Paramount Pictures announced that the fifth live-action Star Trek TV series would be called Enterprise - and just Enterprise with no Star Trek or colon - and would star Scott Bakula as Captain Jonathan Archer. It would be a prequel series set a century before the events of even the original series, and would feature a very low-tech version of the Star Trek universe. The show would be set before the Federation is even founded, with Earth and Vulcan in a tenuous (and unequal) alliance and races like the Andorians and Tellarites causing mischief before they can be brought into the fold. The Klingons and Romulans are barely-rumoured threats on the horizon and the very first starship Enterprise is a primitive vessel lacking transporters or shields. 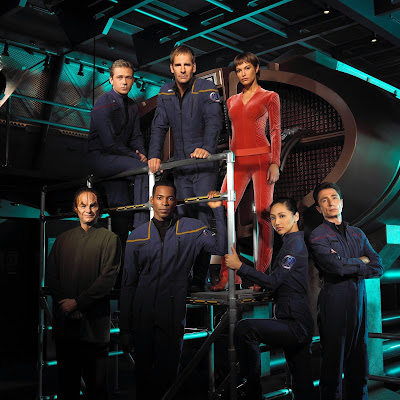 The cast of Star Trek: Enterprise.

Fans rejoiced. It sounded like the bold reinvention the franchise needed, a move away from the near-magical tech of the late 24th Century and a return to a time when even the systems close to Earth could harbour surprises and dangers. But such hopes were, if not dashed, then soon muted. The transporter is pretty much working as intended by the end of the pilot episode. Space battles would refer to "Armour buckling!" rather than "Shields failing!" but otherwise be pretty similar. Trundling around at Warp 5 maximum wasn't too different from trundling around at Warp 9.9. And the stories that were being told were soon becoming predictably Star Trek-by-the-numbers. Even the Borg - somewhat incongruously - soon showed up. Oh, and there's the theme song, which may be the worst piece of music ever used in the franchise.

That said, Enterprise was never quite as terrible as Voyager at its worst. The actors gelled a bit better and Scott Bakula made a strong leading actor. There were some pretty decent episodes in the opening couple of seasons and the show did learn from Deep Space Nine by bringing in multi-episode arcs, long-form storytelling and a recurring sometimes-ally in the shape of Shran, played by DS9 veteran Jeffrey Combs. The ending of Season 2 set in motion a new story arc in which the Enterprise has to enter a remote region of space in search of an alien race which has fired a devastating superweapon at Earth.

Season 3 was dominated by this storyline, and saw an uptick in quality as new writer Manny Coto came on board and made the show his own. At the end of the season he was promoted to showrunner, and spearheaded a fourth season which was driven by short arcs establishing elements of the Star Trek universe to come, as well as making good use of the Mirror Universe. Although some issues remained - the average episode quality was still patchy and some of the explanations for things in the Star Trek universe (like the human-looking Klingons of the original series) were deeply stupid - the show was clearly headed in the right direction, creatively. Reviews improved and there was clearly a fresh energy working behind the scenes.

But these improvements were not translating into good ratings. And whilst Enterprise was getting better, it would be hard to argue that it still looked tired compared to the storming and intense new Battlestar Galactica mini-series, which aired in 2003 ahead of the regular series beginning a year later (with ex-Star Trek writers such as Ronald D. Moore, Michael Taylor, David Weddle and Bradly Thompson on board). There was also fierce competition from the StarGate franchise, with StarGate: SG-1 feeling breezy and fun compared to Enterprise. And of course there was the disastrous box office and critical run of Star Trek: Nemesis in late 2002 and early 2003. If Nemesis hadn't killed the Star Trek franchise, it had certainly brought it to its knees. 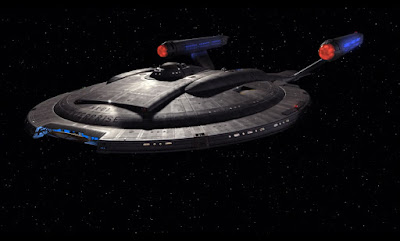 The NX-01 experimental Enterprise. Not a Starfleet or Federation starship, which is why it was not counted or mentioned in previous Star Trek shows. Cough.


On 2 February 2005 Paramount announced it had cancelled Star Trek: Enterprise (the title and colon had been reinstated in the third season). Production ended on 8 March 2005 and the show's sets were struck and taken down. It was a historic moment. For the first time since mid-1977 - when Star Trek: Phase II entered pre-production only to be cancelled and replaced by Star Trek: The Motion Picture - there was no standing Star Trek set on the Paramount lot, and no in-production Star Trek project, either film or television. It was a sobering moment, but one that was almost ignored due to the controversy that erupted when Enterprise's final episode aired on 11 May 2005.

These Are the Voyages... was meant to show the impact of Archer's crew and their adventures, showing the founding of the Federation and the birth of the Star Trek universe. It did try to do these things...but in the context of a holodeck recreation created by Commander Riker and Counsellor Troi on the Enterprise-D during the events of Star Trek: The Next Generation. The last ship we see on Enterprise isn't the trusty little Enterprise NX-01 which gives the show its name, but the Enterprise-D, a ship that had been blown-up on screen eleven years earlier. Critics slated the episode, fans (even TNG fans) criticised the move as being disrespectful and the regular Enterprise actors felt insulted.

It was a low moment in the history of Star Trek. The franchise was effectively dead in the water. No-one was interested in making more Star Trek, the term "franchise fatigue" had become a mantra at Paramount and that seemed to be that.

Well, almost. Eighteen days after Star Trek: Enterprise ceased production, the BBC broadcast the first episode of Doctor Who in sixteen years. Battlestar Galactica had come back from the wilderness after twenty-five years and become successful, winning coveted Peabody and Hugo Awards and plaudits from serious critics. Star Trek wasn't dead forever, it was just resting. It just needed a fresh idea and someone willing to tackle the job of bringing it back...and that wasn't going to take as long as anyone might have thought.
Posted by Adam Whitehead at 21:30