The survivors of the Ark have formed a tentative alliance with the native Twelve Tribes, or "Grounders", in the wake of their victory over the inhabitants of Mount Weather. However, a schism threatens to open on the fate of Mount Weather's science and technology. Adding to the chaos, when a long-separated group of survivors from the Ark manage to regroup with their fellows after months of fighting the Grounders, they are horrified by the idea of the alliance and seek to undermine it. At the same tribe, the Ice Nation tribe also seeks to break the treaty and destroy the Ark. The only person capable of speaking to both sides, Clarke, has gone into exile. Meanwhile, the superintelligent AI which unleashed the nuclear war in the first place is still active...and has plans for the remnants of humanity. 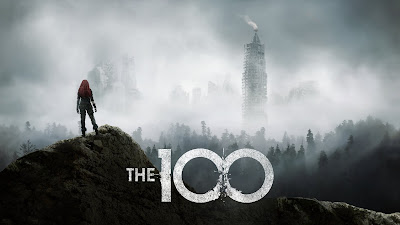 The 100 is a fast-moving, intense show. It's covered an enormous amount of ground in just two seasons and the third season continues this trend. When so many shows are capable of sitting back for two or three episodes in a row and not do very much, The 100 can cheerfully tear through a season's worth of plot twists and character deaths during that time. As a story it's relentless, and perfect for binge watching one episode after the next.

The third season is very much a story of two halves: the first half focuses on the Grounders and their internal dispute with the Ice Nation, and the citizens of Arcadia (as the crashed Ark, now being converted into a city, is called) and their own rift on how to proceed with the alliance. The former plot is understandable, as the Skykru (as they are known) have killed a lot of Grounders. The latter is, however, completely ludicrous. The few hundred survivors of the Ark in their single valley with limited bullets and supplies are no match at all for the Grounders, who seem to number in the hundreds of thousands and (as this season reveals) controls most of the Eastern Seaboard of both the former US and Canada, and the notion that any intelligent person would demand to go on the offensive against this unbeatable enemy is fundamentally unconvincing.

Fortunately, this plot becomes moot as the ruthlessly amoral AI known as ALIE begins to take over both Grounders and people from Arcadia, aiming at total subjugation to a vision known as the "City of Light". Survivors from both sides, scarred by their previous conflicts, have to join forces to take on this mutual threat.

The plot structure is pretty standard but The 100 does good things with it. It's also built up enough of an enormous main and supporting cast that dividing them against one another and making them fight (often to the death) is a viable way of telling the story (and cutting actor salaries!). The show also hasn't forgotten about previous conflicts and storylines and some very long-running stories reach their pay-offs this season as well.

Unfortunately, the storytelling is often hampered by plot twists that feel more belaboured than natural. Behind-the-scenes drama led to the early exit of one very popular character, whose death feels cheap and pointless. It's also hard not to feel that the first half of the season is rendered completely moot by the second, although the finale does hint at some more story to come in that area. The show also continues its curious trend of having some pretty good actors in the like of Henry Ian Cusick and Paige Turco and proceeding to not having them do very much. Bob Morley also has to work overtime in his role as Bellamy, who inexplicably switches sides several times for no apparent reason.

For the most part, performances are good (Richard Harmon's world-weary, constantly-expecting death attitude as John Murphy becomes a lot of fun this year) even if a few of the cast are firmly at the cheesy overacting end of the scale. But The 100 does a great line in sneering villainy and pulp action, so it's not inappropriate. The writing could be stronger in places, but the fast-moving plot and ruthless attitude to character deaths makes for a series that is frequently more gripping and interesting than it feels it should be. The cliffhanger, which raises the stakes dramatically to the global level, certainly left me keen to see what will happen next year in the fourth (and potentially final, given the so-so ratings) season.

The third season of The 100 (****) maintains the quality from the second, with a couple of brief dips due to implausible plot twists and a few cheap character deaths that feel more motivated by a producer's annoyance than story requirements. But overall it's still a watchable, fun and sometimes genuinely morally interesting show. The season will be released on 26 October on DVD and Blu-Ray.
Posted by Adam Whitehead at 12:10

Email ThisBlogThis!Share to TwitterShare to FacebookShare to Pinterest
Labels: cw, the 100, the 100 tv