In 2005 Star Trek looked dead, or as close to dead as it had ever been. Enterprise had been cancelled, Paramount was not interested in any further Trek projects and Rick Berman's plans for a new film dealing with the Romulan Wars (set after Enterprise but still before the original series) were politely rebuffed.

Legal shenanigans also played a role. CBS, which was part of Paramount under the Viacom banner, broke away to become independent, taking the Star Trek TV rights with it. From now on, any TV and film projects would proceed independently from one another. In addition, the two companies did not part on the best of terms and were less than cooperative in supporting one another. The 40th anniversary of Star Trek in 2006 passed almost completely unremarked. But already there were moves behind the scenes to bring back the property.

Paramount were keen to make Star Trek a mega success on the big screen, and for it to join the ranks of the $1 billion blockbuster franchises like Batman and Star Wars. They felt that the TV and film series had become too entwined and that later films had suffered from not having the iconic original characters on board. They decided that a reboot was the best way to proceed and opened discussions with J.J. Abrams.

Abrams was the co-creator of TV shows such as Alias and Lost, the director of Mission: Impossible III and the head of Bad Robot Productions. He was seen as an increasingly influential and powerful figure in Hollywood, a potential heir to Spielberg and Lucas, and he was one of the few people in Hollywood whose name had almost become a brand in itself. Roberto Orci and Alex Kurtzman were up-and-coming writers whose material so far - The Island and The Legend of Zorro - had been effective if not outstanding. The three teamed up for Mission: Impossible III, realised they had a good working relationship and began developing ideas for a new Star Trek movie. Abrams admitted he was only loosely familiar with the franchise, having been much more of a Star Wars fan growing up, and found Star Trek "too philosophical". Kurtzman and Orci - especially Kurtzman - were much more familiar with the franchise and bigger fans of it, and were excited about the idea of using the classic characters again.

The new Enterprise drew inspiration from both the Motion Picture refit version of the ship and Apple products.

During development Kurtzman and Orci decided to pay lip service to the original Star Trek universe by confirming that it still existed and the new film (and any sequels) would explore a splintered-off, side-universe. This was to allow the continued sale of novels set in the original timeline as well as not to adversely affect the development of Star Trek Online, a multiplayer video game set in the original timeline. They won a casting coup when Leonard Nimoy agreed to appear in the new film to "hand over" to a new generation of actors.

Development of the film continued through 2007, during which time the Abrams-Kurtzman-Orci troika also created the television series Fringe and brought in Lost producer Damon Lindelof to assist in script development on the Star Trek movie. Casting announcements were made throughout 2007 and there was widespread approval of choices such as Zachary Quinto as Spock and Anton Yelchin as Chekov, along with John Cho as Sulu and Zoe Saldana as Uhura. Famous SFF fan Simon Pegg's casting as Scotty raised some eyebrows due to his terrible Scottish accent, although fans also noted this was a continuation of the tradition from James Doohan, who was Canadian and whose Scottish accent was "variable" in quality.

Filming took place from November 2007 to March 2008, and the movie was finally released on 8 May 2009. Fans were split over the first trailer, which featured oddities such as the rebooted Enterprise being built on Earth rather than in space and sequences which seemed to emphasise explosions and a rock and roll soundtrack (Kirk being a fan of the Beastie Boys was thought to be incongruous). However, there was praise for the way the movie was tied into existing continuity. The actual release of the film saw a more mixed reception emerge: an acknowledgement of the excellence of the cast (including the returning Nimoy) and some of the aesthetic choices, but also condemnation of, even by Star Trek standards, massive plot holes, forced humour and completely nonsensical sequences such as Vulcan's destruction being visible from a planet millions of miles away. Film critics were likewise split, many praising the effects and casting but bemoaning the story and the lack of intelligence in the script. 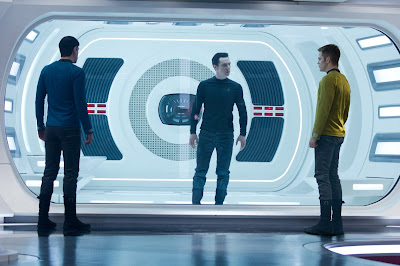 Benedict Cumberbatch turned in a reasonable performance in itself in Star Trek Into Darkness, but he was not a good fit for Khan.


Talk began on a sequel, with initial reports that the movie would have a similar budget. However, J.J. Abrams convinced Paramount that they should go all-in on a film that would echo The Wrath of Khan with massive action sequences, a hugely charismatic villain (who would actually turn out to be Khan himself) and a darker storyline. Abrams himself declined to direct, choosing to produce with Kurtzman, Lindelof and Orci returning to script. However, Paramount would only move forward with the larger budget if Abrams returned to helm the movie. Abrams agonised over the decision for many months before finally agreeing. This resulted in a four-year delay for the film, which Paramount later cited as a contributing factor to its disappointing performance.

Star Trek Into Darkness was released on 23 April 2013. It took $467 million worldwide, setting a new record for the franchise, but the film had been made for a budget of $185 million. Factoring in marketing costs, the movie broke even and made a very modest profit, but it still significantly underperformed compared to Paramount's expectations, especially considering that they were judging the film's success compared to things like the Marvel Cinematic Universe (which had just had its first $1 billion success and was soon to have more). Reviews were also largely negative, focusing on yet another nonsensical plot and the unoriginal decision to remake Star Trek II: The Wrath of Khan - even down to shooting some scenes in a very similar way - but without any of the wit, soul or charm of the original film. There was also criticism of casting the very white, very British Benedict Cumberbatch as Khan Noonian Singh, a warlord from the Indian subcontinent of Sikh decent (albeit played by a Mexican actor originally). 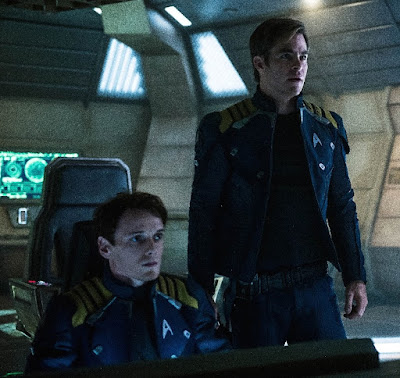 Star Trek Beyond features the final appearance of Anton Yelchin as Chekov, as the actor sadly passed away in June 2016 in a car accident.

Despite the criticisms, the film still made a small amount of money and, bereft of any alternative big franchises, Paramount decided to make a third film. They were left a little surprised when J.J. Abrams then abandoned ship to direct the new Star Wars film, The Force Awakens. They slashed the budget ruthlessly back down to Star Trek (2009)'s level and hired a new director, Justin Lin, of The Fast and the Furious fame. Orci and Kurtzman began developing stories but they were swiftly jettisoned in favour of a new script written by Simon Pegg with input from Lin, a massive Star Trek fan. Kurtzman would later join the TV revival project at CBS instead. Fan anticipation for the third movie remained cool, but increased a little after Pegg and Lin confirmed that they wanted a film with less plot holes than the previous two and various incongruous elements introduced to the new canon (such as transporters able to beam people instantly across light-years of space) were simply ignored.

Star Trek Beyond is scheduled to open on 22 July 2016, but Paramount has been heavily criticised for a lacklustre promotional campaign, with a terrible first trailer and almost no mention of the film's heritage despite it being the franchise's 50th anniversary year. Later trailers raised more interest. Sadly, the film lost one of its actors a month before release when Anton Yelchin passed away in a vehicle accident outside his LA home, making Star Trek Beyond one of his last appearances.

The future of Star Trek on film hangs in the balance. If Beyond does well, more films are anticipated. Indeed, Paramount has already earmarked 2019 for the release of a possible fourth film. If it does badly, it's likely that Paramount will again retire the franchise and consider new directions. But to an enormous number of people, Star Trek on film has always been a bit of a bonus. The franchise's true home is, always has been and always will be on television, and that is also where its destiny lies.
Posted by Adam Whitehead at 13:04

Critical reaction to the 2009 film was very positive. Even Into Darkness got good reviews from the mainstream. It was mainly a portion of the Trekkies who couldn't bring themselves to enjoy it