With both Deep Space Nine and Voyager over and a new series in the planning stages, the custodians of the Star Trek franchise turned their attention to a new movie starring the Next Generation crew. They made the decision that they wanted a clean break with how things were done in the past, with a new behind-the-scenes crew to inject some new blood and excitement into the films.

This, it turned out, was not an altogether successful decision. 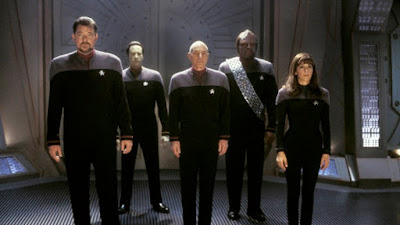 Released four years after the previous Star Trek film, Nemesis was going up against The Lord of the Rings: The Two Towers, Harry Potter and the Chamber of Secrets and Die Another Day at the box office. In retrospect, moving it might have been a good idea.

To make the tenth Star Trek movie, Rick Berman and Paramount decided to bring on board a new writer and a new director with no previous Star Trek credentials. Berman in particular was aware of how this had worked splendidly well for Star Trek II: The Wrath of Khan, when producer/writer Harve Bennett and director Nicholas Meyer came on board and saved the franchise from oblivion. His hope was that a similar creative approach could yield similar results.

To write the movie, Paramount called on the services of John Logan. Logan was hot property in Hollywood, having just come off the tremendously well-received Gladiator and Any Given Sunday. His later movies would include the well-received The Aviator, Hugo and Skyfall, so clearly he was a talented screenwriter. He was also a major fan of Star Trek and was a friend of Brent Spiner's, who got him up to speed with the rest of the cast. Logan was keen to explore the Romulans, feeling that for such a classic Star Trek race they'd been grossly overlooked by the franchise, and there was a feeling that they could make both an epic action story and a more personal story about the characters and their fates (Picard's relationship with his young clone and Data's relationship with his android predecessor, B4). All of the pieces were in place for a strong movie. Paramount just needed to choose a good director.

Tom Hardy was generally praised for his role as Shinzon, and has gone on to become a Hollywood superstar.

For reasons that are still a bit fuzzy, they went with Stuart Baird. Baird was a highly experienced and acclaimed editor who had recently moved into directing, helming the moderately well-received Kurt Russell/Steven Seagal vehicle Executive Decision and the so-so U.S. Marshals. Paramount could have gone with Jonathan Frakes, who had helmed First Contact and Insurrection, but Frakes was finishing up another movie (Clockstoppers) and Paramount chose not to wait, even though it was down to a matter of a couple of weeks on the schedule. It was hoped that Baird would, like Meyer twenty years earlier, bring a fresh and new perspective to the franchise. This was undone by the fact that, unlike Meyer, Baird refused to watch any of the TV episodes, was allegedly derogatory about the franchise to other people and jarred badly with the castmembers, getting LeVar Burton's name repeatedly wrong and making quips about his character being an alien. In more recent years the castmembers have called the director an "idiot". Paramount also insisted that the Voyager character Seven of Nine be inserted into the movie against the writer's wishes, an insistence that only went away when Jeri Ryan herself turned the proposal down, calling it idiotic. Kate Mulgrew was instead hastily written in with a cameo appearance as Admiral Janeway on a viewscreen.

Still, the movie that resulted wasn't too bad, at least if reports of the assembly cut are to be believed. There were impressive action sequences between the Enterprise-E and the Reman battlecruiser Scimitar, some interesting scenes musing on life, death and rebirth and the casting department knocked it out of the park when they turned up a young, hard-hitting and intense British actor named Tom Hardy to play the main villain, Shinzon. The effects team did great work and the script struck a nice balance between action, comedy, drama, tragedy and pathos. Baird's direction ranged from poor to mediocre, but the script and certainly the performances could have turned things around if Paramount hadn't received the cut of the movie and taken a chainsaw to it.

The space battle between the Enterprise-E and the Scimitar wasn't too bad, but did miss the point from The Wrath of Khan that having two evenly-matched ships is more interesting than some super-vessel we know is going to get beaten anyway (Into Darkness makes this mistake as well).

Star Trek: Nemesis's initial cut was close to three hours long. This was, clearly, far too long for a Star Trek movie and there was scope for some of the scenes to be deleted. But Paramount had devised a - highly questionable - strategy for the film. They were going to launch it directly opposite the second Lord of the Rings movie, The Two Towers, and use its much shorter running time to pack in more performances and pick up more viewers from people who couldn't get in to see The Two Towers. As a result they hacked Nemesis down to barely 115 minutes, removing numerous scenes of character development or reflection in favour of action, explosions and violence.

This strategy was an unmitigated failure. As it turned out, The Two Towers wasn't the only game in town. There was also the new James Bond movie, Die Another Day, and the second Harry Potter movie, The Chamber of Secrets, to contend with. Released in December 2002, Nemesis simply couldn't stand up to that level of competition and retired from the cinema having taken a catastrophically low worldwide box office of $68 million against a budget of $60 million. With marketing costs factored in, the movie was an abject failure, the first Star Trek movie to actively lose money at the box office. The film's critical reception was also horrible, with the movie getting the worst reviews since at least Generations, if not The Final Frontier. 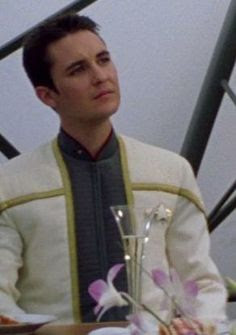 Wil Wheaton was to make a cameo appearance as Wesley Crusher, but his material was all cut from the final edit of the movie. Fortunately, a few years later Wheaton would reinvent himself as a cult geek figure by appearing on web series The Guild and on sitcom The Big Bang Theory.

Fortunately, the film was saved by the DVD release. The movie shifted over 1.1 million DVDs in its week of release, with strong sales for several weeks afterwards. Like most of the Star Trek franchise it developed a very long tail. Thanks to the DVD release, the film was pushed firmly into profitability, but it was far too close for Paramount's comfort.

The film's reception resulted in several things happening. A sequel script, which would have been the last Next Generation movie designed to send off the TNG crew altogether, was cancelled.  All further development of the Star Trek franchise in the cinema was halted. A proposed reboot projected helmed by Rick Berman was politely rejected. Paramount had a new buzzword floating around and that word was "franchise fatigue." Star Trek had reached the point of burn-out and it was time to put it on ice.
Posted by Adam Whitehead at 21:49

This is a terrific series of articles. Thank you very much.