Disney and Lucasfilm have confirmed that Star Wars: Rogue One is undergoing five weeks of reshoots over the course of this month and early July. The internet has responded with panic, fuelled by rumours that people are unhappy with the early assembly cut of the movie. 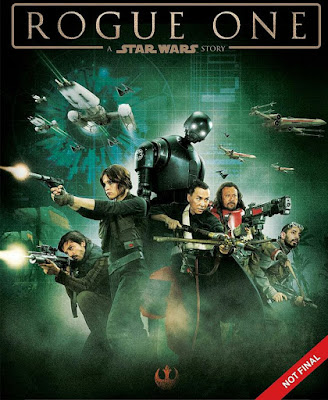 Entertainment Weekly has investigated and concluded that the reshoots were always planned and are in fact now part of the normal creative process. Reshoots on earlier movies occasionally took place, but it was Peter Jackson's Lord of the Rings trilogy which built in the idea of allowing for several weeks of reshooting in the middle of post-production, allowing scenes to be tweaked with new footage to clarify or expand on plot points. In fact, at the moment Rogue One is ahead of schedule compared to where The Force Awakens was, with the completed cut of the film expected to be assembled in August (compared to October for The Force Awakens).

The film will be released on 14 December 2016 and will chronicle the Rebel Alliance's theft of the plans for the original Death Star, leading directly into the events of Episode IV: A New Hope. Episode VIII - the direct sequel to The Force Awakens - is currently wrapping up shooting and will be released in December 2017.
Posted by Adam Whitehead at 09:38

I've watched plenty of movies that after watching them I had concluded that they should have reshot the entire movie, so this news isn't troublesome to me in the least.

So Rogue One is the prequel to Episode IV: A New Hope, whereas The Force Awakens is the remake of A New Hope (I refused to admit it is not). Anyone else as confused by Disney's strategy for Star Wars as I am?