THE LAST KINGDOM to end with fifth season

The saga of Uhtred of Bebbanburg is coming to an end on television. Netflix have announced that the fifth season of The Last Kingdom, currently shooting in Hungary, will be the last. 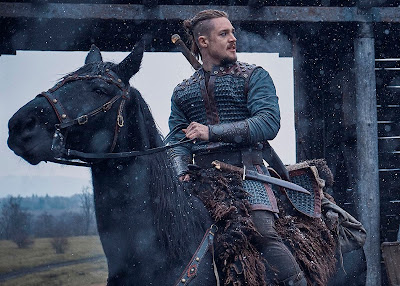 The Last Kingdom adapts the Saxon Saga series by Bernard Cornwell and tells the story of the unification of England out of seven founding kingdoms in the 9th and 10th centuries, a mixture of Saxon nations and lands seized by the invading Danes. Early books focus on King Alfred the Great as he tries to protect Wessex from the invaders with the help of Uhtred, a Saxon raised by Danes who becomes an expert on their way of battle; later books see Uhtred torn between his Saxon and Danish loyalties, but ultimately helping Alfred's successors complete the unification of England. There are thirteen books in the series, with the last, War Lord being published last year.
Each season of the TV show has adapted two novels, leading to the conclusion that the show would last six or seven seasons. However, each season has moved further and further away from the source material and the TV show has had issues in depicting the realistic aging of the characters over many decades. Concluding the TV show with the events of The Flame Bearer, in which a middle-aged Uhtred finally sets out to reclaim his childhood home of Bebbanburg from his duplicitous cousin, is a reasonable dramatic compromise (the books end with a seventy-something Uhtred taking part at the Battle of Brunanburh).
Cornwell fans hopefully won't have to wait too long for another adaptation, though. Cornwell's even more acclaimed Warlord Chronicles trilogy, a "realistic" depiction of the Arthurian legend, is currently in development at Epix.
Posted by Adam Whitehead at 12:13

What a travesty it has had a strong fan base from the start. It is obviously too white for Netflix these days.

NO! Definitely do not want this series to end!

Noooo... it can't be possible... I really love this serie I'm really in to it I love it this cant end I'm pretty sure more people will love to see more season make a poll and found out

Nooo.... this can't be possible.... it's the best I have seen so far we need more I really love this serie and needs more seasons please make Exception make a poll please don't end one of my favorites

Gonna miss the Last Kingdom. Definately a favorite series for me.

That sucks ...this one and Queen of the South 🤬

50% disappointed, 50% surprised it got as many seasons as it did.

Its was better the G.O.T

And G.O.T was a great series

I have watch a few movies with Alexander in them. I have to say ,he is much better in the Last Kingdom. He is so much better as a leader, than anything I have seen him in. I wished he would make a good western movie. I think he would be awesome in those. Where he kicks butt.. I hate to see this finished. But now I can turn off Netflix!!

What a racist comment. I am an African American woman who loves the last kingdom so how is the show to white for Netflix? I have read all the books the show is based upon. You shouldn't automatically assume a racist prospective like that when the article clearly tells you why they won't go any further. I would hope they would continue on to finish out the book sagas but if not respect their decision.

Why is it that when you find a great series someone has to put an end to it. And all the rubbish garbage of series continue on. Shame on you Netflix you had a good series and you're letting it go.

Best series on Netflix! Why are they so Hell bent in destroying it? So many fans! Absolutely stupid taking this show off! I love everything about it!

Best series on Netflix! Why are they so Hell bent in destroying it? So many fans! Absolutely stupid taking this show off! I love everything about it!

One of the best middle ages type shows ever. Even better than GOT. Very sad to see it go, but hopefully they will rush the bebenburg arc which I've been waiting forever for. Guess I'll just have to read the books :(

Noooooooo!!!!!! Is Alexander Dreymon going to be in the other series??

The Last Kingdom and Vikings are the absolute best series made since Lonesome Dove! Series I could watch over and over!