Before I begin this review, I will point out ahead of time that this book features a coven of lesbian bondage witches planning to kill the Prime Minister of Britain, with only a badass military special ops guy who also happens to be a trained wizard standing in their way. It is possible that this information will have you instantly clicking to Amazon to order the book or rapidly clicking onto another topic in fear, meaning I don't have to write the rest of the review. For the three of you who do require more information, I will however carry on. 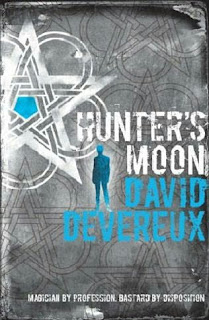 Rewinding a bit, Hunter's Moon opens with a James Bond-esque mission which introduces our 'hero' (used in the loosest possible sense of the word), Jack. It has nothing to do with the rest of the book, and is meant to show how our protagonist operates when a mission goes well. The main storyline kicks in when Jack is assigned to assist a rookie agent, Annie, who has infiltrated a coven of witches who seem to be up to no good. He arranges the death of one of their senior members and Annie manages to replace her. However, things start going a bit pear-shaped and as Jack investigates further, it turns out the witches' plans are more ambitious than he first thought and their resources considerably greater.

Hunter's Moon is many things, but a subtle examination of the human condition it isn't. Jack is a self-admitted amoral bastard, but also has a (slight) soft spot for his rookie colleague and a lingering sense of patriotism that occasionally threatens to make him likable. He has tremendous resources - you'll probably be shocked to hear that he works for a secret government organisation so secret even MI5 don't know they exist, as well as a network of independent informants and friends - and, if in doubt, kills first and asks questions later. The cliches come thick and fast, but there's a wryness to the writing and the author is clearing slipping the reader a nod and wink about the ludicrousness of throwing together a novel that combines SAS 'manly man' fiction featuring guns and dominatrix villainesses with the contents of a year's subscription to the Fortean Times. The magic system used in the book is also interesting and seems to open up a number of some interesting possibilities for future stories.

Hunter's Moon (***½) comes across as the demented love-child born of an unholy union between Laurel K. Hamilton (when she was decent) and Andy McNab, and is fast-paced, entertaining and quite funny. However, it also has a fair bit of (usually eye-watering) sex and violence, meaning it isn't for the squeamish or faint of heart. It is available in the UK from Gollancz and is available in the USA via Amazon. A sequel, Eagle Rising (featuring zombie Nazis), is also available now and I'll be reviewing that one in a few days. You can also find reviews of the book on Graeme's Fantasy Book Review and Sandstorm Reviews.
Posted by Adam Whitehead at 00:18

This doesn't really seem like my thing at all, but I am so amused by your review I am almost tempted to give it a try. I think it was the demented love-child line that convinced me :-)

That's an hilarious review but I think I'll pass XD

Reaction to the review does seem to be intriguingly split among gender lines. Several male reactions on other forums have been "READS FIRST LINE - SOLD!" :-)

If I ever do become an author, than the lesbian witch James Bond series will be the second thing I write ;-)

Totally hilarious review, as others have noted. I would be tempted to read it, but probably only if armed with a large bottle of alcohol.

It's entertaining, for sure. I can certainly lend you the book. Alcohol, sadly, you'll have to supply :-)