"Romulus will rule, and build the walls of Mars
And he will give his people his own name:
Romans. On them I lay no limits.
I set them free from distance and from time,
I have given them an Empire without end."
- Aeneid 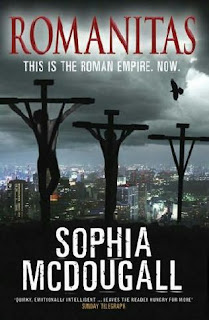 Two thousand, seven hundred and fifty-seven years after its founding, the city of Rome sits at the heart of an empire that covers more than half of the globe. From the coast of California and the western edge of Hudson Bay to the Himalayas, the Roman Empire rules supreme. It has become technologically advanced, arming its legions with jet aircraft and tanks, but at heart it is still rules through the application of power and capital punishment. Immense mechanical crosses on the banks of the Tiber and the Thames slowly execute those who have defied the will of the people, and the Empire's economy is still based on the toil of slavery. The Empire needs to be strong as its greatest rival, the island-empire of Nionia, expands its power and influence on the Asian mainland and begins to amass troops in its holdings in North America.

When the Emperor's youngest brother and heir Leo dies, a great state funeral is held, but his son Marcus learns that the death was an assassination. Leo's oft-mentioned plans to reform the Empire and abolish slavery were deeply resented by some in Roman society, possibly within the imperial house itself. Marcus vows to fulfil his father's plans, but another assassination attempt soon puts him on the run, and he flees into Gaul. At the same time, two young slaves, Una and Sulien, are forced to escape from London when Sulien is falsely accused of rape. Meeting in Gaul, the three runaways learn of the existence of a secret refuge in Spain, where they can find succor, but Marcus knows he must eventually return home and expose the conspiracy that threatens the Empire.

I'm a sucker for a high concept, and Romanitas' premise is decent. Basically, the Roman Empire never fell. Instead it expanded to cover much of the globe, with only the rise of the Chinese and Japanese empires in Asia managing to successfully stave off its advances. There is a lot wrong with this theory, not least the fact that if Rome never fell the Dark Ages probably wouldn't have happened and human technology could well be four or five centuries ahead of where it is now. Instead McDougall paints the world pretty much as it is now in terms of science and technology, which is rather conservative to say the least. But I'm guessing she wanted to simply have our world with the Roman Empire overlaid on it, so I'm willing to swallow a bit of disbelief to have that work.

The story rattles along pretty well for a debut novel and it covers a fair bit of ground. The writing is a bit stodgy in places, and it's clearly the work of a relatively inexperienced author (it was McDougall's debut novel). For all of that, it's a decent read. Some of the imagery, such as the great mechanical crosses on the banks of the Thames slowly tearing people apart, is incredibly vivid. The use of a modern media society in a Roman context also works quite well: the newspapers are state-controlled, obviously, but the government allows them free reign in gossiping on the imperial family's scandals to distract the people from the more serious matters of government. The unfairness and ruthlessness of slavery is also well-depicted (although, again, sociological development over the intervening centuries would probably have seen slavery abolished at least several centuries earlier, but we can live with that) and the characters are, if not huge compelling, able to carry the story reasonably well.

On the minus side, the writing isn't always as strong or focused as it could be and whilst some elements leap off the page, others don't. The substitution of 'longdictor' and 'longvision' for telephone and television is also quite irritating. Other modern words are used, so why those aren't as well, I don't know. Also annoying is the revelation that several of the main characters are telepaths, which comes out of nowhere. So rather than just being an alternate history, Romanitas also has other SF elements. This would be fine, if there was a solid story reason why telepathy is in the plot. Whilst this may come out in the sequels, in the first volume it feels like it's a plot device solely there to get the characters out of dangerous situations that the author couldn't deal with any other way. It's also a bit of a head-scratcher, as the novel's blurb states that, "This is the Roman Empire. Now." Well, it should read, "This is the Roman Empire. Now. With added psi-powers!" The concept seems a bit out of keeping with the rest of the book.

Romanitas (***) is a solid enough read which never seems to really get to grips with the full possibilities of the premise. As an action-adventure novel, it's enjoyable enough and there's certainly enough about the concept to make me want to read the sequel, Rome Burning, which I hope to get to in the next couple of weeks. The book is available now in the UK from Orion Books and in the USA via Amazon.
Posted by Adam Whitehead at 21:13

I got this book when it was originally published in the UK several years ago (04 or 05??) and I was so disappointed I almost threw it in the garbage and it definitely made my "clean out" list at my next book donation soon after as well as putting the author on my "never read again" list.

Maybe I had too high expectations, but to me the book was such a waste of a great promise...

It's a book that provokes a lot of strong reactions, and I note that reviews generally tend to be totally negative or people love every moment of it. For myself, I thought it was slightly above average and showed a lot of promise, but the book could have benefitted from some tighter editing, if not a full rewrite to iron out the clunkiness and maybe get rid of the telepathy, which seems totally incongruous to the story.

If you like that concept Robert Silverberg wrote a book like it in 2003 called Roma Eterna. It looks at various times in history and how they could have happened to help perpetuate the Empire. It wasn't too bad.

From I what remember Roma Aeterna was a collection of previously published stories, possibly with some original to the book, rather than a novel, and I definitely enjoyed at least some of those.

RM Meluch also wrote some recent (so-so) books in which a "modern" Roman empire coexists with US, and of course Peter Hamilton's superb novella Watching Trees Grow has a similar theme

So is this book worth buying or should I try to get it from the library.

Library. It's a pretty divisive book so you may end up hating it, so definitely try before you buy.