"The dawn is brief and the day full often belies its promise."

In this review I will be discussing a book which features incest, murder, war, torture, the massacre of thousands and acts of heinous betrayal that condemns thousands of innocents to death. Nope, not the new Richard Morgan, this one was written by the same guy who created Tom Bombadil. 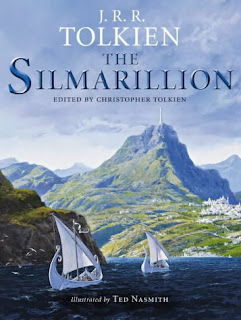 The Silmarillion is the most staggering achievement of fantasy created in the 20th Century. Written between 1917 and the author's death in 1973 (with frequent diversions to write what he considered diversionary works, like The Lord of the Rings), it is quite literally the product of a lifetime's work. Tolkien's goal with this book was to create a mythic cycle as complete and complex as anything found in 'real' legends, and to dedicate that mythology to his country, Britain, which he felt had been robbed of its own native mythology by the Norman invasion of 1066.

The Silmarillion opens with the creation of the entire universe by the One God, Eru, and the shaping of the world of Arda by his servants, the Valar (the gods) and the Maiar (the angelic and later demonic spirits). As is traditional, one of the Valar, Morgoth, rebels against the others, turns to evil and causes untold chaos and destruction for the Valar and Eru's lesser creations, the Elves, until he is finally chained in the Valar kingdom of Valinor. The Elves are allowed to settle in Valinor where their master-smith, Feanor, forges the Silmarils, the most beautiful jewels ever created. Morgoth repents his sins and is allowed to go free, but upon seeing the jewels he devises a plan to steal them and flee back over the sea to Middle-earth, where his trusted lieutenant Sauron (note: doesn't possess a giant flaming eye at this point) has been holding down the fort for a few thousand years. For good measure Morgoth also destroys the Trees of Light, plunging the world into infinite darkness. The Elves take umbrage at this and a vast host assembles to pursue Morgoth back across the sea, but the Valar ban them from pursuing, promising to deal with the situation themselves once they have restored light to the world (by creating the Sun). Feanor and his kin, the Noldor, disobey the Valar, damning themselves and all who ally with them, and steal the fleet of one of the other Elven kindreds, the Teleri, unleashing civil war in the process.

So begins the hopeless war of the Noldor against Morgoth. The Valar, furious with the disobedience and kinslaying of the Noldor, refuse to intervene and the War of the Jewels spills out of control, engulfing the races of Dwarves and Men. The lands of Beleriand, where the war is fought, become ravaged as Morgoth summons entire legions of Balrogs and hosts of Dragons to his banner. The scale and savagery of this apocalyptic war makes The Lord of the Rings and the War of the Ring look like a minor family tiff. As the war rages for more than six centuries, the stories of many individual Elves, Men and others unfold.

The Silmarillion is not, in the usual sense of the word, a novel. There is a very strong narrative spine, but it's a history, not a plot, and there are no characters that the book really centers on (although there are plenty of major characters, most of them die in various intriguing and creative fashions over the course of the story). Instead we have the closest epic fantasy has ever come to emulating the Bible, right down to the "In the beginning," opening, a cast of characters that numbers in the thousands and the need to frequently refer to the appendices and maps to keep track of what is going on. But if you can get into The Silmarillion's headspace (and fair enough, a lot of people cannot), you will be utterly blown away by it.

If Tolkien's goal was to create a mythology, he succeeded. This is a story rich in imagery, symbolism and themes. Ask a dozen Tolkien fans their favourite part of the book and you'll likely get a dozen different answers, whether it's Morgoth and Ungoliant (Shelob's considerably bigger and meaner great-great-great-something-grandmother) preparing to shatter the Trees of Light, Feanor burning the fleet at Helcaraxe and betraying his brother, Fingolfin confronting Morgoth in single combat, Hurin's raging defiance whilst being tortured, Turin's slaying of Glaurung, Luthien and Huan kicking the living crap out of Sauron (admittedly not at the height of his powers here) or the epic battle for Gondolin where the Elf-lord Ecthelion slays a Balrog in single combat. In fact, for iconic or memorable moments, The Silmarillion significantly outstrips Lord of the Rings, hard as that is to believe. 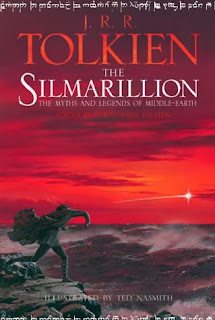 The Silmarillion is a very dark work, going far beyond the bittersweetness of Lord of the Rings. No-one really 'wins' and only a few characters manage to survive the Gotterdamerung-like end of the war into the Second Age which follows. The unending tragedy of the book can be hard to swallow, but there are rays of light and moments of hope along the way. It's hard not to map the book onto Tolkien's own experiences, with the bloody and relentless grimness of WWI being succeeded by the flu pandemic and economic stagnation of the 1920s. Of the moments of light, the strongest is probably the tale of Beren and Luthien. Inspired by Tolkien's relationship with his wife Edith, this is a story of tragedy and triumph with a (relatively) positive ending. However, it is succeeded by the tale of Turin. Told in greater detail in The Children of Hurin, Turin's story is a tragedy that even Shakespeare would have probably shied away from writing, and remains exceedingly powerful.

Eventually though, the war ends and the battered survivors, finding themselves in the unknown lands of Eriador, set about building the foundations of the world we see in The Hobbit and The Lord of the Rings. This section of the book, The Akallabeth, is the story of the Second Age and the glory and power of Numenor, the mighty human island empire whose kings are the ancestors of Aragorn. From a story point of view it is again a fascinating and powerful story of hubris, pride and monstrous arrogance, perhaps told a little too briefly given its scope, but essential for showing how the nations of Men and the forces of Sauron were set on the road to the War of the Ring.

If The Silmarillion has a weak link, it's the final section, Of the Rings of Power and the Third Age, which basically recounts the plot of Lord of the Rings and The Hobbit in the same style as the rest of the book (the War of the Ring is covered about a paragraph). Since it's highly unlikely you'll have read this before those two other works, it's pretty superfluous and only seems present due to a misplaced sense of completeness.

The Silmarillion (*****) is unrelentingly grim, contains very few characters you'll recognise from the other Middle-earth books, has a rather unapproachable opening and doesn't have any Hobbits in it. On the other hand, it is also one of the most epic works of the imagination ever created, featuring moments of real beauty and gut-wrenching horror. If you want to understand Tolkien and what he wanted to achieve with his myth-making and writing, than The Lord of the Rings by itself is not enough. The Silmarillion is other side of the coin.

The book is available in literally dozens of editions, but the most common ones are the British paperback, hardcover and illustrated editions, the latter impressively painted by Ted Nasmith. The most commonly-available American edition is the hardcover.
Posted by Adam Whitehead at 01:43

Great review! For years, I have been badgering all my LOTR friends, commanding them to read this.

I wish other authors would consider writing something simliar to bolster their universes. We need something like this for Malazan.

I have always thought the Silmarillion the best of Tolkien.

I have two casettes of Christopher Tolkien reading The Darkening of Valinor and Of Beren and Luthien which are nearly worn out.

This is excellent, Adam. The Silmarillion is masterly, a truly great creation myth. Simply a work of genius.

Hemingway once said: I started out very quiet and I beat Turgenev. Then I trained hard and I beat de Maupassant. I've fought two draws with Stendhal, and I think I had an edge in the last one. But nobody's going to get me in any ring with Tolstoy unless I'm crazy or I keep getting better.

The same can be said of other fantasy writers with Tolkien. Why do they do it? You can't tear him down. You can batter at him massively but he'll still be standing. He is by no means without flaw but the edifice and the achievement is enormous. The Silmarillion is a major part of that achievement. And the more you look into Tolkien's major works, the less straightforward they are. Thematically as a whole one of if not the most adult fantasies ever written, without any need for the obvious surface 'adult' stuff. It is what he deliberately leaves unsaid that gives The Lord of the Rings such depth and scope. Best leave him alone. He's done his bit, best just to get your head down and get on and do yours is the way I see it.