Completion announcement of THE REPUBLIC OF THIEVES imminent?

Scott Lynch's The Republic of Thieves, the third book in his planned seven-volume Gentleman Bastard series, is one of the most eagerly-waited books in the fantasy genre at the moment. The previous volume, Red Seas Under Red Skies, was published in June 2007, and the series was expected to progress at the rate of one book a year. However, the third book has been repeatedly delayed since then due to various reasons. 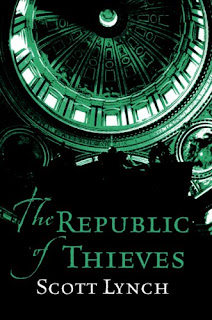 According to Suvudu/Bantam USA blogger Shawn Speakman, Lynch's editors are expecting the completed manuscript of The Republic of Thieves to be delivered imminently, and have already set January 2011 as the provisional date for publication. Since Gollancz have the first-print rights to the series, I imagine this means that that UK publication will precede this by a couple of months or so.

The book is finished and edited. Now his editor will read it again next week, make sure it is right, and then the book will go to the production team.

So far this late-breaking news is unconfirmed by my UK sources but I'll try to get more news on this soon.
Posted by Adam Whitehead at 22:41

As much as I'd love to believe this, I've heard that the manuscript is a week away from completion a few times over the past year.

I'll believe it when I get official word from Lynch or his publisher.

Even though I'll happily help spread this rumor, I agree with Aidan. Until I see something official I don't believe it and will believe that tRoT will get published about the time that ADWD does - 2015 :P

Agreed. At one point last year the book was supposed to have been turned in within days, but didn't appear.

OTOH, Scott Lynch has had some family traumas and problems, including a bout of swine flu, to contend with, and his recent burst of internet activity did suggest that progress was being made.

If the rumor is true and the book is finished and edited, this is really good news. However, if it is indeed finished and ready to go, then that release date is downright cruel.

???one of the most eagerly-waited books in the fantasy genre at the moment???

I don't think so. RSURS was nothing to write home about and he's lost a lot of his initial momentum. I doubt that TROT will do as well as his other books.

I'm with Aidan and Neth - I'll believe it when I see it. Then again, short of all the delays, I'm not certain I understand why there's such an incredible amount of anticipation for this book. I had a great time with The Lies, like everyone else, but RKuRS was a downright disappointment.

I understand that the series is supposed to be very-very good and all, but is it worth starting when only 2 (or 3) parts of a 7-parter are complete?

I honestly wouldn't say so, Anon. Lynch made a good first impression but the quick sequel fell foul of the mark, and in the years since he's writen nothing of note more than piles of ungrateful bile directed at readers eager for the next installment of a series he had promised would be annual.

Adam, on an unrelated matter, if you have a minute to spare could you check out Lord Stark's comment on the last entry in Pat's blog (scroll past the spam). He accuses me of being behind the spam stuff, and since I'm not sure aobut the English terminology, I'd like to know if that's slander or libel. If that takes off with more comments, I'm determined to stop it.

Due to the levels of discussion on the Internet I'd say that the book is definitely one of the most eagerly-awaited out there. I'd say A DANCE WITH DRAGONS, THE WISE MAN'S FEAR and TOWERS OF MIDNIGHT are more eagerly awaited at the moment, but REPUBLIC OF THIEVES is up there, despite the perceived weaknesses of the second volume. The first made such a big splash and the third is supposed to move the story into a new and more interesting direction than the heist antics of the first two, plus the released excerpts so far have been pretty good.

All of that said, the book probably has a bit more to prove than some of the others due to the fact that the second book had a fairly mixed reception. I generally thought the second book was fine apart from some lazy moments at the conclusion of the novel (particularly the introduction of major supporting characters who help resolve the crisis out of nowhere when there was ample scope for them to show up earlier on).

Don't think there is too much you can do. Best to ignore - it's the internet if you take the comments seriously you are just getting yourself in a bind. The Martin flame wars have been going on for a while and it's unfortunate that they centered on you for their attack. This is why George doesn't allow Anon comments because things just explode whenever anything ASoIaF is mentioned.

(Yes i realize i'm anon - too lazy to get an account)

Thank you for the post on the Hotlist, Adam. It thought it was better not to post there myself.

Nee, you are right and that's what I'm doing right now. Let's hope it doesn't spread, though. People like GRR Martin have a name and can afford to ignore that sort of slam, but it's more dangerous for an online nobody (or almost nobody) to get a bad reputation.

(I think the fact that I had disabled anonymous comments long ago may have saved me from some overflow of the nastiness at least.)

I'm excited by the news that the book may be done, but I'm going to side with Aidan and Neth. Believe it when I see it. Let's hope Shawn's sources are correct, though.

Have you heard anything from your source?