THE HOBBIT movies delayed by a year

According to executives at New Line Cinema, that two movies based on J.R.R. Tolkien's The Hobbit are being pushed back by twelve months. The movies were supposed to enter production in Spring 2010 and be filmed back-to-back over twelve months, with the first film being released in December 2011 and the second in December 2012. However, New Line execs have reported that delays resulting from a restructuring of the company will see shooting delayed until the summer (British and American time, winter in New Zealand) or even later in 2010. That makes the fourth quarter of 2012 a more attractive release date. 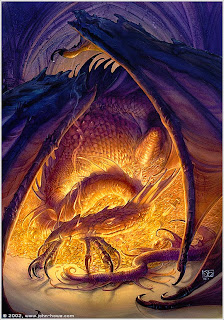 Smaug will have to wait another year before waking up.
The news is disappointing, but also understandable from a business perspective. The Lord of the Rings trilogy shot over a year with a full year allotted to post-production and re-shoots on each movie, but even this proved extremely tight, particularly with The Return of the King, the final cinema edit of which was delivered just hours ahead of deadline in 2003 and just days before the film was supposed to be in cinemas. The Hobbit movies also have a year-long shooting schedule, and shooting from summer or autumn 2010 to summer or autumn 2011 leaves an uncomfortably short period for re-shoots or post. Of course, the first film could instead air in summer 2012 rather than the winter, but the winter is a more lucrative time period for film releases and New Line see The Hobbit films as major 'tent-pole' films which will hopefully regain them a lot of box office clout that they have lost after a recent string of flops. In addition, this move allows Weta to have more post-production time on the two films than they did on the three Lord of the Rings films, which was restrictive (although they did produce successful results).

This news will presumably mean that the second film is also pushed back a year to December 2013.
Posted by Adam Whitehead at 00:26

That sucks... i was looking foward to it.

wine of the month club said...

Good things come to those who wait ... I guess we will all wait.