Unexpectedly dramatic developments in Hollywood. Sam Raimi and his team who had been behind three very successful Spider-Man movies had been all set for a return for a fourth and potentially fifth and sixth films in the franchise, with the fourth movie set for a 2011 release. However, a series of behind-the-scenes problems seem to have unfolded, resulting in production being rolled back a year and the original plan to make the next two films back-to-back being dropped. 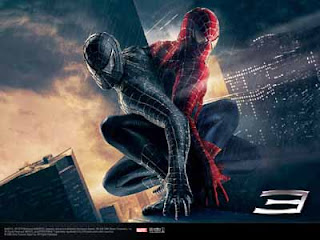 Sony Pictures announced today that they were parting ways with Sam Raimi and star Tobey Maguire (and presumably the other recurring actors and crew), but have retained Spider-Man 4 scriptwriter James Vanderbilt to instead pen a remake. The new film, now planned for release in 2012, will apparently return to the classic origin story and begin the story again from scratch with a new cast. In a positive-sounding statement, Raimi wished the new team good luck.

I have to admit that I did not enjoy the original Spider-Man (2002) very much, finding Maguire to be an effective Peter Parker but the movie overall lacked sparkle and was overloaded with dissatisfying CGI, not to mention the Green Goblin's ridiculous Power Rangers-style appearance. Spider-Man 2 (2004), on the other hand, I thought was a very strong movie with Alfred Molina making for a much more formidable antagonist and the story was more interesting. Spider-Man 3 (2007) was a confused, incoherent and plain ridiculous mess with too many villains and too many ideas clamouring for screentime.

Whilst the third film was poor, it wasn't a franchise-destroying travesty on the scale of Joel Schumacher's Batman movies (which were so bad they effectively forced a reboot of the franchise eight years later), and the new movie will arrive only five years after the previous film, a rather short span of time before a reboot takes place. This would be the equivalent of a remake of King Kong, War of the Worlds or The Lion, the Witch and the Wardrobe coming out this year. I think most people would agree that this is simply too short a space of time to warrant a new take on the concept.

The reasons for the split are unclear, but it is possible that since Marvel Studios are taking a closer involvement with the new reboot, it may be that they want to tie their flagship superhero in with their 'family' of other superhero movies set in a shared continuity that they are developing (including the two Iron Man movies, the new Hulk, the new Thor movie out next year and The Avengers film which will unite them all in 2012). However, it is a big risk. Sam Raimi and Tobey Maguire have made this franchise very successful indeed, and it is possible that public interest in the character and series will simply drop off rather than being transferred to the new cast and production team. Interesting to see how this pans out, as it may be the biggest test of the public's tolerance for remakes and reboots to date.

In the meantime, this leaves Sam Raimi free to look at a new, fresh project - which may or may not be the long-gestating World of WarCraft movie - and Maguire to pursue other work (such as the Robotech movie he's been bigging up for years).
Posted by Adam Whitehead at 03:08

I hope they take the opportunity to work Spidey into the greater marvel universe (Iron Man + Thor + Hulk). Maybe add the X-men too (it is up for a reboot too, right?!

Don't have the patience to sit through another emo high school origin tale though...

X-MEN is with Fox, I believe, so they can't join the party (at least not without a tremendous wad of a cash and a complicated licensing agreement). I believe the rights for FANTASTIC FOUR and DAREDEVIL are also with other studios, so they're out, at least for now.

Last I heard, the next 'main' X-MEN movie is apparently going to be a prequel set in the school with Storm, Cyclops and Jean as teenagers just starting to grips with their powers. New castmembers for them, but possibly with Stewart still in place as Xavier. Interesting take as it's a sort of reboot without actually being a reboot, and brings back Stewart without having to find some way of resurrecting him from the events of X3, which would be lame.

Of course, whether they can do a new X-MEN movie without Wolverine somehow cropping up is another question. Good news is that Bryan Singer is apparently considering returning to direct (and ahead of his planned BATTLESTAR GALACTICA movie, which really would be a remake too far).

I can't be the only person who grinds his teeth at the word "reboot" (and not because I have a crap computer). Seriously, I get that it's about money. I know the deal. But I don't have to like it.

Me, weaned on comic books until the age of 30, can't stand the thought of another "All new all different" Spider-Man. I hear World of Warcraft and go, "Cool!" I hear Robotech and go, "Awesome!" (As well as "Die, Min-mei, die.")

But the comics I loved as a kid ... I saw them made into movies and was happy. They weren't horrible. But I don't want to see them redone. I'm finished with them.

I agree, the third movie was a mess. Think they need to let some time pass before a reboot though, as they did with Batman and Star Trek.

I don't know if it is the reason for the split, but there had been talk of tension between Raimi and the studio over the choice of villain. Raimi wanted the Vulture, the studio apparently were not keen.

AYH: I think reboots are very important. The superhero genre has, for whatever reason, never embraced consistency - which may be a big flaw in terms of the comics, but is actually a boon in a larger cultural sense: Batman and Superman and Spiderman are not characters in a story, they're characters in a mythology. What we do with them is like what the Greeks did with their heroes.

No superhero film is a film OF the story of the characters, because they don't have 'a story' - it's a film that uses those characters, and various elements of the established mythology. Different films can draw on entirely different elements of the mythology, and show them in totally new ways. Batman et al have become so 'large' that there's always more that can be done with them.

Batman is a good example of that. We've got the Adam Ward series and film, we've got the Burton films, and we've got the Nolan films - all are about Batman (and have in turn gone on to shape the public consciousness of the characters), but all are very different in style and tone and characterisation. I preferred Burton to Nolan, but I'm glad they didn't just carry on making films in that series (even if they hadn't gone to hell when he left), because it's allowed us to see an entirely new Batman.

Who knows, maybe the new Spiderman will show us something different as well?

[I doubt it; it's obviously far too soon for a reboot, and Spiderman is rather less interesting than Batman to begin with, but hey, you never know]

How about a Spiderman with age appropriate casting? Macquire was like 27 when he did Spiderman. Part of Spiderman's charm has always been the sort of youthful zest he has despite the tragic nature of his first days. I always felt that exuberance was shirked for the films in favor of some of the angst/melodrama that has also consistently plagued the character.

Though maybe the movie will open wither Toby Macguire as Pete making a deal with Mephisto to start all over again. That'd work, right?

I read somewhere that the reason for the initial delays and than eventually the split was that Raimi refused to put out a fourth film with a script he didn't approve. Apparently he did not like the third movie's script either but was overruled. I guess the issue he had was that the Lizard was the main enemy in the fourth one and he wanted to go in another direction.

Anyway, I am a little disappointed as I was still hopeful they could redeem themselves and put out an amazing movie like Spiderman 2 was. However, I think that ship has sailed regardless and they should just let this rest. The thing I hate about reboots is you have to sit through the same origin story all over again.

They really bungled this up. They could have done the Green Goblin/Harry Osborne in the third one and saved Venom and even Carnage for the fourth one and that would have been awesome.