Orbit Books have completed the UK publication of Daniel Abraham's very fine Long Price Quartet this week. They have decided to publish the books as two chunky omnibuses, with A Shadow in Summer and A Betrayal in Winter being published under the title Shadow and Betrayal and An Autumn War and The Price of Spring being combined as Seasons of War. Shadow and Betrayal was previously released in 2007 (and reviewed here) with a rather dubious brown fog cover. Realising this wasn't helping the book much, Orbit have reprinted the original omnibus alongside the publication of the new with much better cover art*. 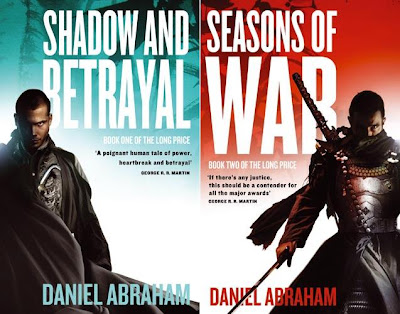 Orbit have a huge amount of faith and excitement for Abraham's career, and will also be publishing his new series, The Dagger and the Coin (summed up as a cross between George R.R. Martin and Joss Whedon set against Medici-eseque backdrop) in both the UK and USA, starting in 2011.

* Better than the brown fog UK cover, not the jaw-droppingly amazing US covers.
Posted by Adam Whitehead at 17:12

I always thought I was discerning enough to not judge a book by the cover. I have to admit, though, that the UK covers have made give Abraham a second look.

So I poked around and read your review of the first omnibus. I just added it to my wishlist! Great reviews, by the way. I love your review index and your blog.

If I recall correctly, the content of these books has nothing to do with the UK omnibus cover.

Just whom or what are the covers supposed to show or indicate?

I am 90% through the original TPB version of the first omnibus (which I won from Pat's Hotlist a year or more ago) and have just recently ordered it and the second one in MMPB from bookdepository.co.uk where they're about a third of the price if I were to buy them here in Oz. I'll give this TPB version to my brother or a friend to see if they like it as much as I have.

I am absolutely LOVING this series, Abraham has an economical style of writing that suits me to a T. There's no extraneous bullshit, he just gets right into the story and the characters are so clear and distinct it is just a pleasure to read. He has created a fascinating world and an engaging tale.

Plan is to read the next omnibus straight after the current one - I love reading a series all in a row.

"Just whom or what are the covers supposed to show or indicate?"

Since the 'Brown Fog Cover' didn't work for Orbit and the 'Bloody Excellent Covers' didn't work for Tor, I'm guessing Orbit is now trying the 'Generic Samurai Guy Who Isn't Actually in the Book' approach which may be nonsensical but, based on how well this worked for Brent Weeks, may actually shift some copies. We'll see how well it does.

I rather like the "Brown Fog Cover"... Much better then those two new ones, anyway.

Regardless of the covers, these are fine books! Very excited about this author.

Wert - you planning on reading and reviewing the final 2 books (or in your case the 2nd omnibus)?

My copy just came in the post today. Also not a fan of the new covers (though the old one wasn't much good either) but I am a fan of the size - the original omnibus was a large-sized paperback while the new one is normal.

Yes, I picked up the second omnibus today with some Waterstones vouchers, along with Dan Simmons' DROOD.

I'm a bit annoyed that, having bought the original cover, in a different size and all, my series now looks mismatched. Bastards.

Also, this may sell better but it doesn't really reflect the series well. It looks like some David Gemmell-like thing. It's not bad art but it's lazy design work. Giving it something like Guy Gavriel Kay's covers, or the Robin Hobb ones previous to the current iconic style, I reckon.


Books are great though. Just started the second set...

Ooh, John Howe covers on an Abraham book? That would be spectacular, actually.

That was one of the stupidest decisions Voyager have ever made. You have John Howe as a cover artist doing really good work, and then you drop him to rejacket the Hobb books in some anaemic foil effect with pictures of various animals on the cover. WTF? At least with the Martins they replaced one very good author - Jim Burns - with another - Larry Rostant - but the Hobb situation was surreal.

I take it that by "better" covers you in fact mean "AGONISINGLY GODAWFULLY HORRIBLE" covers.

No way I'm buying that - even via the internet where nobody can see me.

Better than the brown fog cover, I meant.

NOT better than the US covers. That would, clearly, be insane.