I previously reviewed Company of Heroes and its initial expansion, Opposing Fronts, here. In that review I noted that since its initial release in 2006, Company of Heroes has become the definitive WWII real-time strategy game and a compelling multiplayer experience, in the latter case becoming the finest RTS since StarCraft. This review focuses on the two subsequent expansions for the game, the official Tales of Valour (or Valor for those of an American persuasion) and the unofficial Eastern Front. 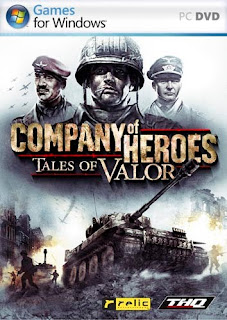 Tales of Valour is very odd. The expansion adds a couple of new units to the established four sides (the Wehrmacht, the Panzer Elite, the British and the Americans) but most of these are useless. The only really successful addition is the new American light tank, the Hellcat, which is more versatile and impressive than the previous tank-destroyer and, when properly used, can help overcome the Wehrmacht domination of the early game through the spamming of armoured cars. The (very few) new maps are okay, but the game focuses a lot on the new multiplayer modes which are, to put it mildly, utter drivel. The new single-player content borders on the laughably pathetic, with three insanely short campaigns focusing on new control methods and experimental ideas that are less effective than controlling the game the traditional way. Combined, the three single-player mini-campaigns will take you less than two hours to complete, and that's being very generous. Tales of Valour, thus is really not worth bothering with unless you can pick it up for a couple of quid.

Eastern Front, on the other hand is much more impressive. First off, it's free. You can download it from here with no charge whatsoever. It isn't made by Relic but a team of fans of the game who have put many months of work into designing new units, doctrines and making sure everything is balanced with the existing sides. There is no single-player content (so far; a single-player campaign is in the works), but instead the mod adds the USSR's Red Army to the game, along with a jaw-dropping TWENTY new maps to the multiplayer mode. The maps are very well-designed, tightly balanced and entertaining to play, and frankly the mod is worth getting just to get access to the new maps with the existing sides. 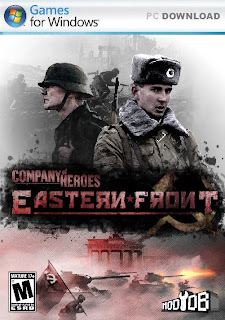 Of course, the addition of the Red Army is the mod's main selling point. Relic previously claimed that they couldn't add any more sides to the game due to programming limitations, so the fact that the mod-makers have had no problem expanding to six sides (a future patch for the mod will also add the Osteer, the German's Eastern Front-focused army) is impressive to start off with. The Red Army faction is a different sort of beast to the existing sides, focusing on cheap, easily-replaceable infantry units, an impressive mixture of tanks and light artillery and some extremely formidable heavy units which appear later on to make mincemeat of the German Panthers and Tigers. WWII games usually struggle to encompass the full development of the Red Army throughout the Second World War, which started off armed with rifles and wooden planes and ended as a lethal fighting machine which drove the Germans all the way back to Berlin. The existing sides put an emphasis on preserving your units and reinforcing in the field, but the Red Army faction is almost designed for its lower-end units to be disposable, with you feeding troops into the mincer to hold back the Germans long enough for the T-34s, Sturmokovics and Katyushas to enter the field in force.

Once you get used to the Red Army's foibles, they make an excellent and viable faction. In fact, they are a notably superior faction to either the Panzer Elite or British and are well-balanced against the Wehrmacht. A possible weakness is that once they acquire large funds they become almost unstoppable, particularly due to the population cap-free Conscript infantry and the easily-summonable T-34 tank-rider units which are not only formidable tanks in their own right but can also capture territory and transport infantry units into battle. Balancing of the Red Army faction against the existing sides continues (one patch has already been issued addressing some of their problems), and after a good couple of years of apathy it's great seeing the player-base for the game brought to life again by the introduction of this new side.

Company of Heroes: Tales of Valour (*) is pretty weak and not worth bothering with, unless you really want that new light tank unit for the USA. Company of Heroes: Eastern Front (****) is markedly superior and makes for an entertaining and highly intriguing addition to the game's multiplayer mode. Plus, IT'S FREE!
Posted by Adam Whitehead at 23:35

Email ThisBlogThis!Share to TwitterShare to FacebookShare to Pinterest
Labels: company of heroes

Why don't you post your video game reviews on rafo.com?

The correct German form is "Ostheer" (Ost/East + Heer/[Ground-]Army).
The term has never been widely used - neither during the Second World War nor after it.

A very good review, though. Thank you very much!

I think they went for 'Ostheer' because the existing German sides are the 'Wehrmacht' and 'Panzer Elite', so they were running out of names for a third German army.

Or just ignore my question. Thats not rude at all.

I choose not to repost my video game reviews on rafo.com because I don't want to. Seriously, nothing more to it than that.

I also have very sporadic internet access at the moment and didn't see your question at the time I logged in to answer the last one.