In 1982, an immense alien spaceship appears in the skies over Johannesburg, South Africa. After several weeks of inaction, the South African government works up the nerve to cut its way into the ship and discovers a million insectoid 'worker' aliens in a state of malnourishment. They are shipped down to an aid camp, but with the spacecraft inactive and not capable of supporting the aliens, the camp rapidly turns into their permanent home: District 9. 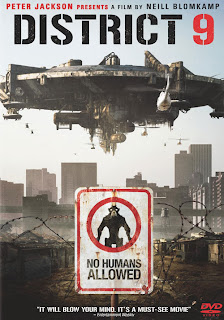 Twenty-eight years later, District 9 is a huge, run-down slum where the aliens live, ostracized from human society apart from the gangs who seek to exploit them. Alien technology, particularly weapons technology, is eagerly seized upon and exploited, but is generally coded to alien DNA and will not work for humans, leading to frustration. With the residents of Johannesburg becoming increasingly unhappy with the aliens living on their doorsteps and their increasing numbers (almost doubling since their arrival), the South African government decides to move them 200km away to a new camp in the countryside, District 10. Multinational United, a private company investigating and exploiting alien technology, is assigned to handle the move and one of their employees, Wikus van de Merwe, is ordered to lead the serving of eviction notices to the aliens. During this Wikus is 'infected' by some kind of alien fluid and begins experiencing mutations, leading MNU to experiment on him. Wikus realises that he must enlist the help of the aliens in learning what has happened to him, and in the process discovers what their experiences living in District 9 are like.

District 9 was one of several big 'sleeper' hits in 2009. Made on a relatively modest budget of $30 million, it made more than six times its money back at the box office (a success that even the mighty Avatar has not yet quite replicated), despite featuring no star names and being made and set in South Africa with a large amount of subtitles. The movie's origins are also unusual. Director Neill Blomkamp had previously been hired by producer Peter Jackson to work on the Halo move adaptation after producing several imaginative short adverts for the Halo 3 promotional treadmill. Blomkamp and Jackson's work on the film was at a fairly advanced stage when the movie was put on hold due to concerns over its immense budget. Having enjoyed collaborating together, Jackson and Blomkamp decided to fill in the spare time with a new project, a (relatively) low-budget expansion of Blomkamp's earlier short film Alive in Joburg. Given the film's immense number of high-quality effects shots and the heavily action-driven last act, it is even more impressive that the movie was made for such a small amount of money (only a little more than 10% of the budget of Avatar, for example).

District 9 is a curious beast. Much of its opening half is filmed from the POV of various camera crews, news footage, documentaries and so on, introducing the aliens, their spaceship, MNU and Wikus himself. After the incident in the slums when Wikus is infected this approach is scaled back in favour of following the action in a more traditional manner. This transition is a little awkward (with Wikus asking someone to shut off a camera after a good 15-20 minutes of the story being completely told using the documentary approach and then the action continues to unfold) but aside from that this mix of approaches does work quite well. With Sharlto Copley as Wikus being on screen for pretty much the entire movie, his performance is key to making the movie work, and fortunately he is an excellent actor. He improvised most of his dialogue to keep the film feeling authentic and real despite its SF premise, and he is aided by some great prosthetic and make-up work. Jason Cope takes on the role of 'Christopher', an alien plotting to escape Earth who becomes Wikus' only ally as the story proceeds, and like Andy Serkis in The Lord of the Rings trilogy performed his role in-camera only to be replaced by CGI later on. Cope does a fantastic job, giving Christopher (clearly some kind of technician or higher-caste creature than the other, rather unintelligent aliens) real character and presence.

Broadly, District 9 is a successful and 'different' SF movie, with a clear parallel being drawn between the treatment of the aliens by humans (black and white alike) and the treatment of the black population of South Africa during apartheid. The movie's title and premise are based on the 'District Six' situation of the 1970s, when an area of Johannesburg was declared 'whites only' and the black population was forcibly moved to another location. The South African setting gives rise to a very different SF movie to what you may have expected in an American or European film. Violence is commonplace, the killing of aliens by MNU personnel or humans by the aliens is largely unremarked on (shrugged off as one of the dangers of the job) and corruption of the MNU and the law enforcement company they have hired is endemic. This bleakness is present throughout the film, and although occasionally wearying, does make the film feel authentic. The fact that the aliens have been around for twenty years and no-one is really shocked by them any more also gives the film an interesting air of realism in spite of is highly fantastical premise.

The CGI is excellent throughout. Not quite as breathtaking as Avatar, obviously, but the constant integration of the CG aliens with real human actors in real locations is clearly challenging and they pull it off pretty much flawlessly. It's so good, in fact, that you forget that these creatures, weapons and in a couple of cases weapons are not actually there at all, which is of course the point of good visual effects, supporting the story without diverting attention away from it.

One flaw I've seen noted by critics is that the movie's intelligent side, notably the exploration of the apartheid-like relationship between the aliens and humans and possible further exploration of the aliens' backstory, is largely abandoned in the third act in favour of an extended running action sequence. I didn't have a huge problem with this, as Blomkamp was clearly uninterested in making a vast epic and wanted to get in, say some interesting things, deliver an entertaining picture, and then get out again, which is fairly laudable in an age of needlessly swollen running times. Whilst there's some logic problems in the final act (the alien mecha suit that plays a large role in the climax seems to go from being invulnerable, heavily-armoured and sporting powerful weapons to being fairly fragile and unable to take down a small number of opponents in the space of a couple of scenes) it's also fairly compelling, with some great moments building up to a somewhat ambiguous ending. The movie is left open-ended for a possible sequel or follow-up, but the movie as it stands has enough closure to be satisfying.

District 9 (****½) is a short, sharp and clever motion picture combining great visuals and some interesting thematic elements with excellent performances. The film is available now on DVD (UK, USA) and Blu-Ray (UK, USA).
Posted by Adam Whitehead at 18:11

I enjoyed this movie! it was original and intelligent - quite the opposite of Transformers II. And Christopher was the best character, too.

Best Sci-Fi of last year was "Moon", but this came a close second.

Enjoyed District 9 immensely and Sharlto Copley fully deserves the attention that this performance has given him. He's playing Howling Mad Murdoch in the film version of The A-Team.