First reviews coming in for the new SoIaF novella

The Mystery Knight, the third Song of Ice and Fire prequel novella, will be published in the USA on 2 March in the Warriors anthology from Tor Books. Following on from the events of The Hedge Knight and The Sworn Sword, it once again features Ser Duncan the Tall and his squire Egg as they travel the Seven Kingdoms engaging in various adventures, roughly eighty-five years before the events of A Game of Thrones. Not much is known about the new novella save it won't be the occasionally-hinted-at Winterfell adventure featuring the 'She-Wolves'. 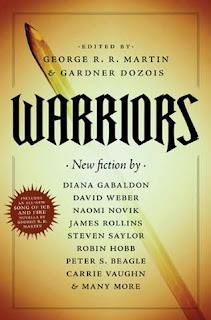 Larry from OF Blog of the Fallen has a very brief and spoiler-lite quasi-review of the novella here. I expect to see some more cropping up in the next few weeks as more ARCs are sent out.

Particularly interesting is the news that the novella features significant expansion on backstory and historical elements for the Dance of Dragons (the first Targaryen civil war in Westeros) and some other details. This reflects The Hedge Knight, which established the start of Dunk and Egg's adventures before we learned how they ended in A Storm of Swords, and The Sworn Sword, which established the Faith Militant, the Blackfyre Rebellion and Bloodraven, several elements mentioned several times in A Feast for Crows.

In other news, GRRM has also reported the delivery of Songs of Love and Death to the publishers. No publication date yet, but he confirms that there is a new Dresden Files story by Jim Butcher, a new Kushiel tale by Jacqueline Carey and a new Outlander story by Diana Gabaldon, along with new stories by Peter S. Beagle, Tanith Lee, Robin Hobb and Neil Gaiman, among others.
Posted by Adam Whitehead at 03:14

Email ThisBlogThis!Share to TwitterShare to FacebookShare to Pinterest
Labels: a song of ice and fire, george r.r. martin, the mystery knight