Wertzone Classics: A Clash of Kings by George R.R. Martin

The Seven Kingdoms have been torn apart by war and five kings now battle for supremacy. In King's Landing, Tyrion Lannister now serves as the Hand of the King. Tyrion needs all of his cunning if he is to protect the city from those who seek to capture it and seize the Iron Throne. Meanwhile, in the lands beyond the Wall, the Night's Watch have taken the field against the wildling king, Mance Rayder, and Jon Snow is dispatched on a hazardous scouting mission. In the distant east, Daenerys Targaryen and her small band of followers reach the great city of Qarth hoping to find salvation, but instead find treachery. 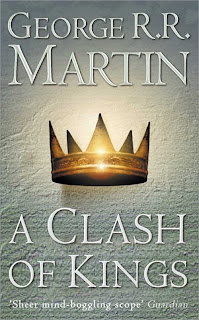 A Clash of Kings picks up immediately after the events of A Game of Thrones. Indeed, large chunks of this book were written for Thrones before it became obvious that the first book was too big and had to be split in two (an oddly familiar situation...). However, there are some differences between the two books. Some new POV characters are introduced and the scope of the series expands radically, with the introduction of Stannis Baratheon and his followers and the ironborn entering the story in force. This book also features some fairly intricate military maneuvering as the bulk of the war takes place (some readers may find tracking down some of the more detailed maps online will be more useful than referring to the bare-bones map in the book), which is all pretty well-handled.

There's a lot of great stuff in this second volume. Martin is a fan of drawing parallels between characters (he's suggested comparing and contrasting Daenerys' skills at ruling Meereen in the forthcoming Dance with Dragons with Cersei in A Feast for Crows) and in this novel it is impossible not to compare Tyrion's success in the role of the Hand of the King with the mistakes Eddard makes in the first book. Tyrion's cunning and ruthlessness is well-depicted, and his story forms one of the spines of the novel. Another is provided by the story of Theon Greyjoy, who is upgraded to POV status and shows us the state of affairs in the Iron Islands. Theon is a hard character to like, but his viewpoint remains well-written and fascinating. 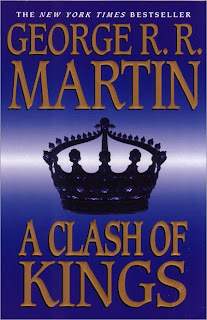 A Clash of Kings, despite featuring the biggest battle in the series so far and some of the most important and decisive moments and scenes, feels like something of a transitory book between the opening salvo of the story in A Game of Thrones and the climax of the opening movement in A Storm of Swords, which probably accounts for it not being rated quite as highly as either of those books amongst readers. However, it is just as well-written as either, the story remains gripping and the characters are still compelling.

A Clash of Kings (*****) is a vital continuation of the story begun in the first novel and is highly recommended. The book is available now in the UK and USA.
Posted by Adam Whitehead at 18:29

Email ThisBlogThis!Share to TwitterShare to FacebookShare to Pinterest
Labels: a clash of kings, a song of ice and fire, george r.r. martin, wertzone classics

I actually liked A Clash of Kings better than A Game of Thrones. It does not give the reader the same sense of closure that the solving of Robert's riddle in book one manages but it contains some memorable parts of the overall story. I liked the Tyrion parts in this book in particular.

Great stuff. I'm glad to see your reviews for ASOIAF coming out now, Werthead. I wondered why your blog didin't have reviews for these books. I put it together when you mentioned that you were re-reading the series. I realised that your first read pre-dates your blog.

After completing The Malazan Book of the Fallen, this series will be next to read.

I just...FINALLY...read A Game of Thrones and now I'm hooked! I am almost 100 pages through Clash of Kings and am every bit as sucked in as I was with the first book. At this rate I'll be through them all soon and will be impatiently awaiting book 5.