It's 1982 and Britain is at war. Whilst the nation cheers on its soldiers and sailors fighting in the Falklands, life back in London carries on as normal for DI Alex Drake. Well, as normal as it can do when you're really from 2008 and your entire life appears to be a fictional construct within your own mind as you suffer from a bullet-induced coma. Having failed to avert her parents' death, Alex is now unsure what it is she must do to return home, until the rising tide of police corruption within the Met becomes clear and she and Gene Hunt make it their mission to bring the bent coppers down. But as their dangerous game of cat and mouse with their corrupt superiors unfolds, Alex starts getting odd messages and hints that she might not be the only temporally-displaced person in this world... 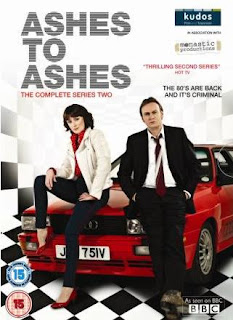 After an initially shaky but eventually compelling first season, Ashes to Ashes returns firing on all cylinders for its second. Learning from their experiences, the writers have put together a much more compelling season-spanning story arc than either the first year of Ashes or both seasons of its predecessor series, Life on Mars, with Gene and Alex leading an attempt to bring down their corrupt bosses in the Met. This storyline takes up the first half of the season, but no sooner is that out of the way than Alex is confronted with the notion that she might not be alone, and has to find out who is sharing her 'hallucination' and why they are there.

The writing is tighter this time around, the characterisation stronger and, in particular, the writing for Alex Drake is much improved, making her a more sympathetic figure than the arrogant know-it-all who dominated the first half of Season 1. There's also a nice subplot for the hitherto under-utilised Marshall Lancaster and Montserrat Lombard as Chris and Shaz, whose engagement provides a nice undercurrent of humour to the proceedings (and unexpectedly ties into the main storyline later in the season). Keeley Hawes and Philip Glenister are still impressive as the leads, with Dean Andrews continuing to provide solid support as Ray Carling, who shows some interesting character growth this season. We also have two recurring characters, Charlie 'SuperMac' Mackintosh (Roger Allam) and Martin Summers (Adrian Dunbar), who act as antagonists through much of the season, both well-played and nicely developed as characters.

The mystery element, namely why did Sam Tyler and now Alex Drake find themselves in the past, is also developed with some intriguing new clues hinting that what the audience previously assumed or thought they knew is completely wrong. Events culminate in the final few moments of Season 2, which rival episodes of Twin Peaks or The Prisoner for sheer surrealism and bemusement-inducing incredulity. What is going on? The third and final season of Ashes to Ashes, which will also mark the final appearance of Gene Hunt and the end of the five-season arc begun at the start of Life on Mars, promises to hold all of the answers.

Ashes to Ashes: Season 2 (****½) is a superior slice of SF-tinged crime drama. It is available now on DVD in the UK, with a US release planned for next year. Season 3 starts airing in the UK in April.
Posted by Adam Whitehead at 22:33