Happy 20th Birthday to The Wheel of Time

The Eye of the World, the first novel in The Wheel of Time sequence by Robert Jordan, was published in January 1990, making this month the twentieth anniversary of the series. 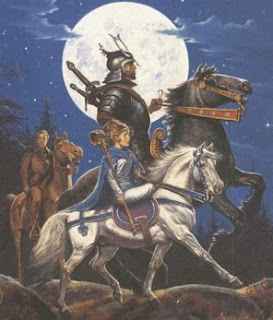 James Oliver Rigney, Jr. conceived of the series in the late 1970s, whilst working on some historical novels. He expanded his ideas for the series whilst working on the Conan books under the pen name 'Robert Jordan' (henceforth used in this article as that was the name his fans knew him best by) in the early 1980s, and formally proposed the series to Tom Doherty of Tor Books in 1984. Doherty loved the idea, but was sceptical that the story outline Jordan had given him could be contained in just three books. He signed the series for six instead, and Jordan set to work on The Eye of the World that year.

It took five years to write the first book in the series. Jordan's concepts and ideas kept changing. His original thought was to make the series' central character an old, grizzled veteran who is summoned back to war and discovers he is the chosen one with the destiny of saving the world. Jordan later reconsidered, deciding that a younger protagonist would be easier to empathise with, and recast the veteran as Tam al'Thor, the adoptive father of the Dragon Reborn, Rand. Writing at a time when fantasy was dominated by Tolkien-lite trilogies, he also grew concerned that his series was too different from the glut of other works out there to win an audience, so rewrote portions of the first book to adopt a more Tolkien-esque feel. As it stands, by the time the book was published the market was already starting to tentatively move away from Tolkien-esque fantasy and The Eye of the World would be long criticised for a somewhat derivative first half before taking the story in a completely different direction.

By the time he delivered the final version of The Eye of the World, Jordan was on a roll with the story and wrote The Great Hunt at breakneck speed, delivering the book at the same time The Eye of the World went on sale in January 1990 and starting work on the third book, The Dragon Reborn, immediately. Work on the series proceeded at an impressive rate, with seven large volumes published in just six years and three months. After suffering exhaustion problems coming off A Crown of Swords, Jordan relaxed his pace to one book every two years. The series entered a long period of considerably harsher criticism, easing in 2005 after the eleventh book in the series, Knife of Dreams, was applauded for getting the story back on track and resolving several major plot threads.

The series was a major commercial success. Tom Doherty had been so impressed he sent out advance reader copies to every bookstore in the United States and ordered a first hardcover print run of 40,000 books, an immense amount for a relatively unknown author. He also published a small preview book containing a large chunk of the novel in late 1989, whetting the appetite of many fantasy fans. These marketing ploys worked and the novel sold out of its first hardcover printing. The print runs for the books increased with each volume, until Knife of Dreams' hardcover run in 2005 would pass one million copies, considerably more than even contemporary works by Stephen King. By late 2007 the series had sold 44 million copies, making it the biggest-selling work of epic fantasy since The Lord of the Rings. 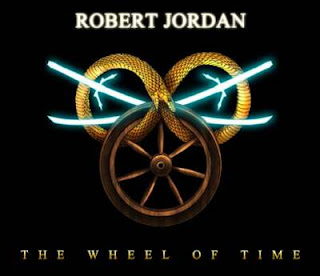 Robert Jordan passed away in September 2007 whilst working on the final book in the series. The novel, which was too big to fit into one volume, was split into three and is now being completed by Brandon Sanderson. The first volume, The Gathering Storm, was published in October 2009 to the biggest critical acclaim the series has seen in many years. Sanderson currently hopes to deliver the second part, Towers of Midnight, this year for an early 2011 publication, and for the final part, A Memory of Light, to be published in late 2012.

The Wheel of Time is a confounding series that will no doubt divide opinions for many generations to come. But it is also an immense and impressive work of the imagination, and may well be the last word in the high fantasy subgenre. Nothing else published since 1990 has really come close to equalling its success in that field, and the rest of the epic fantasy has moved in an altogether different, darker and grittier direction ever since.

The series has spawned a so-so computer game and a decent pen-and-paper roleplaying game, whilst Universal has been developing a Wheel of Time movie series for the last two years.
Posted by Adam Whitehead at 01:02

Really, really nice analysis of this series, Adam. I still confess to loving it, bad books and all. Once Mr Sanderson has completed the final book I shall be embarking on an epic read and know that I shall love every minute.

The move towards grittier fantasy is a welcome one, because it is giving the scene a shake-up and introducing some fantastic new authors to the scene, but I still can't resist a slice of truly epic fantasy.

Oh, and realizing the series is twenty years old? Well, that just makes me feel old.....

I have to confess that I stopped reading the series after the 7th book, I liked the idea of the series but couldn't get myself to read more of it.Robert Jordan - and Raymond E. Feist - introduced me to fantasy and I'll forever be grateful, and if there is a way to continue reading the series while skipping some books that will be great.

It makes me feel old - I started reading in 1995 while in college.

This series led me to the internet to talk about books, which in turn led me to starting a blog. I owe it a lot.

Yeah makes me feel old as well. I remember a mate telling em to try it out way back in 93 or 94 (I think) and although I've since stopped reading them (around book 9) I still buy the series in hardcover and will read it entire once it is completed.

Jordan had some extremely annoying tendencies as a writer (especially in regards to repetitive character actions) but it's still a great series that is a lot of fun to read.

It would have been better if he had stuck to six books - tightly written narratives that moved along and got to the end of the story, instead of overwriting a dozen books that numbed the brain and dragged interminably. I stopped reading them years ago and have no interest in returning. - Ian

I have book 1 on my TBR pile, and would love to read it when work & life allow me to give it the attention I want to give while reading it.

Just curious where you got the release dates for ToM and AMoL?

Those aren't really release dates but timeframes that Sanderson is hoping to meet. The latest from Brandon's assistant is that a March/April 2011 timeframe is most likely for ToM. Speculation about AMOL is only speculation, but Sanderson is aiming for it to be released about a year after ToM.

Thanks for clearing that up... I thought it was Nov Nov Nov... guess this one is going a little slower.

According to Sanderson's assistants' comments, it sounds like the gaps between books will be closer to eighteen months than twelve. Sanderson was unhappy with the way ToM was developing and seems to be restructuring it to 'hang' on the central plotlines just as TGS did with Rand and Egwene's storylines rather than just randomly throw all the different elements (presumably the Black Tower, Elayne in Caemlyn and the Tower of Ghenjei mission) together.

I think Sanderson is maybe thinking that if ToM will take closer to 18 months, maybe AMoL will as well, but given that Jordan seemed to have written rather more material for AMoL than ToM, I wonder if that will actually be the case.