United Airways Flight 93 was a civil aircraft making a regular passenger run from Newark Airport, New York City, to San Francisco on the morning of 11 September 2001. Members of the terrorist organisation al-Qaeda seized control of four aircraft that morning, including United 93. The other three aircraft were crashed into the Twin Towers of the World Trade Centre in New York and the Pentagon in Washington, DC. The hijackers of United 93 were planning to crash their aircraft into the Capitol Building in Washington, but the plane was delayed for half an hour due to an overbooked departure window. By the time the aircraft was drawing close to Washington, news of the attacks on New York and Washington had reached the passengers on United 93. Realising that their aircraft was also going to be used as a weapon, the passengers and crew resolved to storm the cockpit and retake control of the aircraft. 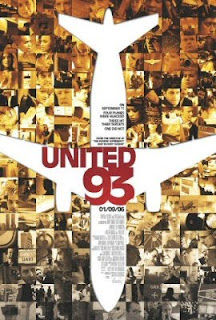 United 93 is one of several films based on the events of 9/11, but is the one that is based most closely on the real events of that day. The script was assembled with close attention paid to the findings of the 9/11 Commission and countless interviews with people involved in the events of the day in air traffic control centres, airport towers and in the military. In fact, during the pre-production phase director Paul Greengrass made the decision to employ a large number of these consultants in the film as actors, playing themselves. The most prominent is Ben Sliney, National Operations Manager at the Federal Aviation Administration centre in Virginia. Sliney is credited as the person who gave the unprecedented order to ground every aircraft in American airspace - over four thousand of them - in the aftermath of the attacks. The American military gave their full cooperation to the film, allowing active personnel to portray themselves. The military were caught off-guard by 9/11, which exposed significant weaknesses in the American air defence system (namely that the hijacking of aircraft was not considered a realistic threat and that only four fighter jets were available for the defence of the entire Eastern Seaboard), but they allowed these problems to be shown in the film to convey the sheer unprecedented nature of the attacks.

As part of the quest for authenticity, all forty-four of the actors portraying the hijackers, passengers and crew were picked to match the real passengers as closely as possible. Many of them spent time with the families of the passengers they were portraying in an attempt to get as close as possible to their subjects. The result is a documentary-like feel to the events of the film, in stark contrast to the rather mawkish over-dramatic feel of the several other TV movies and 'docu-dramas' based on the events of the day. Performances are universally flawless, and the fact that so many of the performers in the military command post and the air traffic control centres are not professional actors is a real surprise.

Structurally, the film condenses some events at the beginning of the movie in order to fit the whole story in the running time. However, from the moment Flight 93 takes off, the movie switches to real-time. Greengrass is a superb director, as seen in his previous movies, and here paces events to perfection with the growing chaos of the situation and the increasingly futile attempts by the authorities to stay on top of it vividly depicted. The moment Sliney takes charge and shuts down American airspace is notable as it's the point at which control over the situation is, to some extent at least, regained. This is also significant as Greengrass cuts away from events on the ground at that point and the rest of the movie unfolds entirely within the aircraft.

Obviously, vast numbers of people watching this film will have vivid memories of 9/11 themselves, and each viewer will watch the film partially through the lens of their own experiences and feelings from that day. For this reason, Greengrass tries not to offer any kind of political or ideological commentary on events, as this would invariably skew the film and lose some of its impact. Events unfold starkly and with no attempt to interpret them. On the commentary Greengrass points out that the hijackers were devout Muslims and shows them praying before and during the hijacking, and reveals he wanted to convey a thematic idea that the terrorists were hijacking the religion to excuse their actions as well as literally hijacking the aircraft, but this idea can't come across very well in the film due to the stripping back of any kind of artistic elements in favour of the simple depiction of events. Similarly, the extraordinarily long delays in the military getting authorisation to shoot down hijacked aircraft and the collapse of many of the emergency procedures in place amongst the air controllers also passes without any kind of comment in the film. These things happened. Why they happened was up to the various post-9/11 committees and investigations to discover, and these events were outside the scope of the film, although references to the extreme length of time since the last hijacking over US airspace do convey somewhat that there were relatively few procedures in place to deal with the crisis, and none at all for the use of aircraft as suicide weapons.

Given the film's excellent direction and acting, not to mention its powerful impact and intensity, I strongly considered giving it the 'classic' appreciation. However, I chose not to due to several problems that would be considered minor in other films, but in one based so closely on real events could not pass unnoticed. The most notable is the extremely questionable decision to depict German passenger Christian Adams as an 'appeaser' who urgently counsels against the decision to storm the cockpit and at one point freaks out when all of the other passengers are shown as resolute or upset, but not actually having a breakdown. Given that there is no evidence that the real Adams did any of these things, Greengrass' decision to depict him as doing them is rather unfair and possibly damaging (a somewhat similar dubious decision to the depiction of William Murdoch, the first officer of the Titanic shown gunning down panicking passengers in the Cameron movie when in fact he did no such thing). The other problem is one outside of the film producers' control. At the time of shooting the cockpit voice recordings from the plane had not been publicly released, and there were no signs they were going to be. The recordings actually were released before the movie came out, revealing that several key events in the film are erroneous (the most notable being that the passengers failed to gain access to the cockpit at all). Both of these problems would be to some extent excusable in a full work of fiction, but given the movie's extreme fidelity to the truth elsewhere, they introduce elements of doubt and misdirection to the narrative which are regrettable.

Despite these issues, United 93 (****½) is a powerful and affecting film. It is not easy viewing but it is certainly worth watching to get a good sense of the chaos and confusion of that day as people struggled to react to the unthinkable. The movie is available now on DVD (UK, USA).
Posted by Adam Whitehead at 00:31

Email ThisBlogThis!Share to TwitterShare to FacebookShare to Pinterest
Labels: united 93

This was an excellent movie. For whatever reason my wife and I watched this movie close to the same time we watched "World Trade Center" (the other 9/11 movie). Some people have told me they won't watch either; the memories are too fresh. That was a few years ago. Me, I watched both movies because I figured I owed it to the people who lost their lives to have some glimpse into what they went through.

I actually didn't like it all that much. I might have to re-watch it to remember why but I just recall that I found it quite... I dunno... something irked me about it anyway and I'm by no means a sentimentalist.