October, 1962. President John F. Kennedy is still politically smarting from the Bay of Pigs fiasco, a CIA-backed attempt by Cuban nationalists to invade their homeland and retake control of the island from the Communist government under Fidel Castro. A U-2 spy plane flying over Cuba photographs new military installations being built across the island. US military intelligence concludes that medium-range, nuclear-armed missiles are being installed on Cuba to give the Soviet Union a devastating first strike capability and gain a major military advantage over the United States. 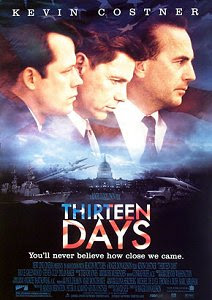 With the missiles still days from becoming operational and the Soviet premier, Nikita Khrushchev, unaware that the USA has discovered the missiles, the United States have the advantage of surprise. The US military urges a surprise attack using overwhelming air power to destroy the missiles. However, the only way to permanently deny the Soviet Union the use of Cuba as a forward base off the American coast is to invade Cuba and remove its government by military force. Kennedy and his advisors know that this will trigger a Soviet retaliatory assault on West Berlin, which will inevitably lead to World War III. Kennedy needs another option, and Secretary of Defence Robert McNamara gives it to him: a blockade of Cuba to prevent additional military materials reaching the island but will give the Soviets a chance to come to diplomatic terms. So begins a high-stakes exchange of diplomacy, the failure of which could very well result in nuclear war.

Given that vast numbers of books and films depict a 'high-stakes' scenario where the fate of the world (real or imagined) hangs in the balance, it is interesting that relatively little attention has been paid in recent years to the one time when the fate of our world really did hang in the balance. The Cuban Missile Crisis of 1962 is the closest that the Cold War ever came to heating up (certainly the closest moment that was known about at the time; a Soviet computer malfunction in 1983 was extremely dangerous but not widely known until years later), when the United States and the Soviet Union stared one another down and the most careful diplomacy had to be used to defuse the crisis. The diplomatic resolution over the crisis was considerably complicated by the lack of any direct methods of communication between the White House and the Kremlin, with messages having to be sent by back channels and feelers extended through the media and the United Nations. In fact, the crisis resulted in the installation of the Washington-Moscow hotline to avoid such problems in the future.

Roger Donaldson's film, released in late 2000, attempts to chronicle the crisis exclusively from the point-of-view of the United States government. There are no scenes set in Havana or Moscow, and the only scenes in Cuba are transition-based ones showing the progress of the missiles being set up and fuelled. This approach is highly effective, as it means the viewer is as blind to what is going on in the USSR and Cuba as the President and his advisors are, and this heightens dramatic moments near the end of the film where important decisions have to be made almost by guesswork: has Khrushchev been deposed in a military coup or not? Is a peace offer genuine or simply an attempt to stall for time? Just as the President and his inner circle had no way of knowing in 1962, so the viewer has no way of knowing in the film.

The film makes the interesting choice to have the action seen from the perspective of Kennedy's appointments secretary (and effective chief of staff), Kenneth O'Donnell, who had no formal policy or advisory role but was a close and old friend of both JFK and his brother Robert. This is an interesting and wise choice, as many of the other characters involved in the crisis are politicians or generals of fairly grand stature themselves, such as General Le May, McNamara, Adlai Stevenson and so on, and using them as the main POV would make the film more about them than the crisis. The relatively unknown O'Donnell, played very well by the surprisingly good Kevin Costner (struggling manfully with a bad accent), carries less baggage and the film isn't so much about him (despite a few half-hearted family scenes) as about the Kennedy brothers and the crisis itself.

Bruce Greenwood plays JFK and Steven Culp his brother Robert, and both are excellent, really inhabiting their characters. Greenwood in particular delivers real gravitas as the President, but also lets slip a few moments of annoyance and contempt for some of his advisors, reflecting some of the tensions that dogged the Kennedy presidency. The lack of faith that Kennedy can deal with the crisis is almost palpable among the senior military figures, and the stress this inflects on the President is well-depicted by Greenwood.

The movie makes several interesting historical points. Whilst some elements, such as the worth of O'Donnell's counsel (Kennedy is seen consulting with O'Donnell and apparently heeding his advice more than the experts, which is questionable), are historically dubious, the idea that Kennedy considered the fates of Cuba and Berlin to be entwined and a US attack on Cuba would trigger a Soviet attack on Berlin is strongly pushed in the film. Kennedy's deep concern over Berlin, heightened by the recent construction of the Berlin Wall, would lead him to a historically famous visit to the city just a few months after the Cuban Missile Crisis.

Less successful is its depiction of the military. The movie starts off by presenting a pretty credible case for military action. A swift and massive US aerial assault on Cuba is portrayed as not leading automatically to war (whilst an invasion would), but could destroy the USA's moral authority in a future conflict. Nevertheless, the strong advantages of the aerial assault are initially fairly presented. However, from then on the military option is consistently presented as the 'wrong' one and some of the senior admirals and generals, such as Le May, are presented almost as villains who even sidestep around Kennedy to try to trigger a conflict. This simplification of the military's actions during the crisis is the movie's key weak point and muddles the issues involved somewhat as well as coming across as a needless attempt to introduce more drama to the script.

This weakness is a shame as the rest of the movie is very good. The dramatic tension of the military build-up and the politicians' mounting confusion during the fog of diplomacy as they attempt to second-guess the Soviet motives at the end of the film are handled superbly. The performances in the movie has pretty much first-rate across the board (Costner's accent issues aside), and the few special effects sequences showing spy planes overflying Cuba and so far are effective, if inexplicably expensive; the movie had a budget of $80 million, higher than Independence Day, and is totally bereft of comparable action or effects sequences.

Thirteen Days (****½) is a very solid film. It shows the stresses of government and effectively depicts a period in the history of the world that should never be forgotten. The film is available now on DVD (UK, USA).
Posted by Adam Whitehead at 23:50

This might be the last really good movie Kevin Costner did.