Newly-discovered GORMENGHAST novel to be published

British writer and artist Mervyn Peake penned his three classic Gormenghast novels in the 1940s and 1950s. Often called a trilogy and frequently published in an omnibus labelled as such, the series was actually incomplete. At various times Peake spoke of a number of books chronicling the adventures of Titus Groan from birth to death, and sometimes hinted at ten volumes in total. 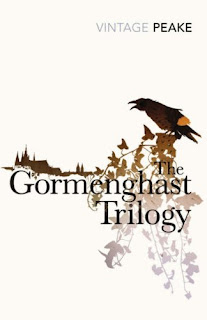 As it happened, Peake began to suffer from Parkinson's Disease and struggled to complete the third book, Titus Alone, and was unable to satisfactorily work on revisions and edits for the novel. It was published in a somewhat unsatisfying form in 1959, although later, more complete editions were eventually issued. Some of these also included the first few pages of the planned fourth novel, Titus Awakes, which Peake had started working on before his condition rendered him unable to write. Peake sketched an outline of the rest of the book in 1960 with suggestions on how it could continue. His wife Maeve then completed the rest of the book, but curiously appears to have made no move to having it published before Peake's death in 1968, or her own in 1983.

Peake's granddaughter Christian discovered the manuscript at the Peake family home, handwritten in brown ink in four exercise books. The Peake family are now making plans to have the book published.

The Gormenghast books are some of the most beloved and highly-praised in the history of fantasy, often cited as formative works of the modern genre alongside the likes of The Lord of the Rings. The first two books, Titus Groan (1946) and Gormenghast (1950) were also made into a successful BBC mini-series in 1999 starring Jonathan Rhys-Meyers as Steerpike.
Posted by Adam Whitehead at 15:18

Calling Peake's writing fantasy, as it is traditionally done, is probably a mistake. I suppose it's just another word for unrealistic in this case. The fantasy lies mainly in the unique use of language and general strangeness.
Anyway, I found that categorisation never made much sense and the comparison with Tolkien is purely coincidental.

GORMENGHAST lies firmly within the fantasy genre. The third book makes that clear when Titus ventures out into the world beyond and finds it a very weird and strange place indeed.

There is little relation to Tolkien beyond the use of the secondary world, but it is often cited (by the likes of Mieville, for example) as an influential and landmark work. This does not require it or other landmark works and writers (THE DYING EARTH, CONAN, Eddison, Moorcock) to necessarily have anything in common story-wise as Tolkien.

I am a patient reader but was never able to go beyond the second novel...of course the writing is good and the universe in interesting...but if this got me through Delany's Dhalgren, I could not take Peake's Gormenghast. I wonder why no one ever mentions the potential for utter boredom in these novels (only my opinion of course).

While Fantasy is generally linked to superstition, legends, fairy-tales, myths, epics, other fantasy writers... Gormenghast is influenced by a wider range of literature, with most of these fantasy influences being largely absent. It also doesn't seem to strive for a constistent secondary world, there are only these things that are of some poetic worth and use (the rest of the world is only vaguely implied).
I think there might be slightly more accurate categorisations to cover the expectations than fantasy. Perhaps Fantastic literature. :P

Anyway, I've said how I see it and rest the case. Interesting news though. I wonder if the decision to publish that work was influenced by the posthumous publications of Tolkien's work.

that Nick is not (me) Takrann Nick! And ain't nowt wrong with the tag fantasy. Fantastic literature and fantasy? There isn't a difference unless a writer is in denial that he or she is writing fantasy because they associate it with some sort of stigma of artistic inferiority. But I digress...

This is interesting news, as I just read the first two Titus books this past fall, and plan on reading the third soon (just so I get the omnibus off of my nightstand.)

I agree that the second book takes perseverance, but I'm glad I made it through.