GAME OF THRONES gets UK airdate

Whilst HBO have not officially confirmed a US airdate for Game of Thrones, all of the unofficial and off-the-record comments seem to heavily suggest that it will begin airing in March 2011. 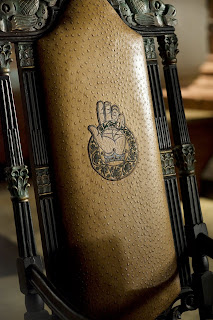 The chair of the King's Hand in the TV series.
Despite the lack of an American date, the British Sky network have announced that they will start showing the series in April on their new channel, Sky Atlantic. Sky Atlantic will show high-quality US imports, including other HBO shows such as Boardwalk Empire (which will start airing in February) as well as AMC's Mad Men, which Sky have poached from the BBC. Sky Atlantic will be included in Sky's basic satellite and cable packages, and Sky are currently discussing offering it with other providers, such as the Virgin network.

Interesting news, especially if it turns out that Sky Atlantic is advert-free. This may horrify US HBO subscribers, who get several HBO channels with no adverts for about $15 a month, but the current basic Sky package is £20 a month and the main Sky channels are infested with frequent advert breaks, which would possibly increase the length of a 60-minute HBO show to about 90 minutes if it aired on Sky One. Hopefully they'll see the sense of keeping the new channel advert-free.
Posted by Adam Whitehead at 17:53

Any idea of how long it will take to get to DVD in the UK after airing on Sky?

US Air Date is 17th April. UK one is yet to be announced but probably either a few days or a week or so after the US.