CryTek's Crysis 2 is one of the most eagerly awaited games of 2011. It's an SF first-person shooter which is the sequel to the hugely successful 2007 shooter Crysis and has been worked on by top SF authors Peter Watts and Richard Morgan. One slight problem: it's been leaked onto the Internet two months before its release date and torrent sites are currently hosting the game. 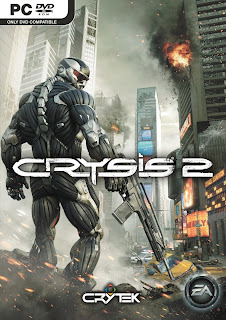 The last time there was a leak of this magnitude was in 2003, when a large amount of Half-Life 2 was released onto the Internet. In that case, the game was only partially finished and Valve were able to rework the game's code and structure so that it was not compromised too badly by the leak.

In this case, the leak is far worse. Crysis 2 is much closer to release and the leaked version appears to be mostly complete, consisting of the full single-player game, access keys for multiplayer and the CryEngine 3 game editor. CryTek have not responded so far, but publisher Electronic Arts are understandably furious, releasing the following statement:

"Crytek has been alerted that an early incomplete, unfinished build of Crysis 2 has appeared on Torrent sites. Crytek and EA are deeply disappointed by the news. We encourage fans to support the game and the development team by waiting and purchasing the final, polished game on March 22. Crysis 2 is still in development and promises to be the ultimate action blockbuster as the series' signature Nanosuit lets you be the weapon as you defend NYC from an alien invasion. Piracy continues to damage the PC packaged goods market and the PC development community."

The game has been in development for about four years and has cost tens of millions of dollars to develop, so the leak is a serious concern for both developers and the publisher. However, finding a silver lining, players of the leaked version seem to be near-unanimously proclaiming it to be an excellent shooter, ramping up the anticipation levels which previously had only been fairly modest.
Posted by Adam Whitehead at 20:50

I suppose it will be interesting to see if sales are any good after the leak, if word of mouth is good then it may help more than reviews, especially since it's coming out on PS3 and Xbox360, so those sales might not be affected (For example I could only play it on my PS3) so maybe people will say 'oh, others like it, I should try it.'

(I realise there are probably big differences between the PC and console releases, I'm just thinking)

Or EA may just use it as an excuse to try a new form of DRM...

Impressively, the CryEngine 3 editor that ships with the game apparently contains the feature that allows the level designer to see what the game looks like on the PS3 and X-Box 360 as well as the PC. And those apparently show that the console versions look very impressive, though some considerable distance behind a high-end PC.

How they work gameplay-wise remains to be seen, but CryTek apparently haven't skimped on the console versions.

This is bad for PC Gaming market.. piracy was already a bigger issue on PC than consoles.. This is gonna makes things worse..

People who buy their games will buy this one anyway if they intended to do so.
People who download illegal copies will not buy it, whether there's an early leak or not.
Game sales are still high and profitable, piracy has never changed that. Those who use illegal copies wouldn't have the money to buy all the copies they get. It could even increase the popularity of the game with word of mouth. It's a moral problem, but not one with big financial impact.

2003 is definitely not the last time there was a similarly major leak. I recall, at a minimum, that back in 2006 a review copy of Final Fantasy XII was leaked onto the internet a good while before the release and people were able to download and play that.

Instances like these are rarely good for the market, but there is almost always some silver lining, at least for gamers.

Unfortunately I cannot feel even an ounce of compassion for EA, their practices and draconian anti-piracy products have sworn me off their products forever.