The Folding Knife by K.J. Parker

Bassianus Severus - known to the people as Basso - is the First Citizen of the Vesani Republic. He is politically savvy, financially creative, ruthlessly ambitious and very lucky. As his power and prestige grows, so does the rift between him and his sister, and the battle for the loyalty of her son. 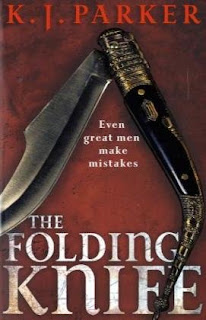 The Folding Knife is the eleventh novel by the enigmatic K.J. Parker, a stand-alone book which is not part of any series. Fourteen years ago I picked up Parker's debut novel, Colours in the Steel, and later its two sequels and enjoyed them enormously. I've missed out on her books since then, which is something I'll have to rectify. The Folding Knife is outstanding.

This is the story of a man's life, or rather a twenty-year slice of it, but mostly focusing on the three years after he becomes First Citizen of the Republic. Basso grows up learning the family trade of banking, and through canny deals and excellent advice he soon becomes one of the richest men in the city. He then moves into politics, using his common touch with the people and his skills of persuasion and blackmail with the nobility to become the ruler of the Republic. He even has a long-term plan for the entire nation: to strengthen its borders and increase its resources against the threat of competing kingdoms jealous of Vesani's growing military and economic might.

Basso plays the Republic like an instrument, working out how to make the people and politicians jump to his tune. However, as the story unfolds Basso's inability to mend the feud with his sister or make foreign powers likewise obey the rules he sets out both become dangerous, leading to more desperate gambles. There's a strong economic spine to the book, with Parker successfully showing how expensive it is to run a large kingdom even without trying to fund major wars. In fact, I'm wondering if the economic storyline is a commentary on the current financial crisis, with Basso's self-justifications and ability to conjure money out of nowhere to keep things going just a bit longer being more than slightly reminiscent of recent news stories on the banks and national governments almost going bankrupt.

Basing the story on economics could be deathly dull, but Parker's well-paced writing, solid characterisation and dry sense of humour keeps things ticking along nicely. Basso is a well-written protagonist, monstrously flawed but also sympathetic, with his genius at handling money and politics contrasted against his disastrous relationships and his empty personal life. Basso's story is something of a tragedy then, but one with more than its fair share of humour and ingenuity. Also, by Parker's standards it's not that dark or disturbing (there's no Belly of the Bow 'moment' of unexpected ultraviolence here), though her twisted sense of humour remains intact. She also reigns in her tendency to interrupt the story for a three-page digression on the best way to build trebuchets (though there is one detailed explanation of how to use a scorpion - a piece of field artillery - as a stealthy assassination weapon, but this is quite funny so fair enough).

This is a strong novel with only a few brief but well-described moments of action, with the focus being on political and economic intrigue. Intriguingly, whilst set in an (unmapped) secondary world, there is no magic or mysticism in the novel at all, but this lack is barely felt.

As for criticisms, the tight focus on Basso means we don't get much of a sense of the Republic or the wider world beyond his own views on it, but that's the point of the story, I suppose. The ending is also perhaps a little underwhelming (and whilst it's not the first in a series, the ending is open enough to allow for a later sequel, if necessary). The reasons for Basso's sister's hatred of him are also under-explored, since we don't have any POV chapters from her. Finally, there are moments when things go as clockwork and Basso finds things going all his way that feels a little too clinical and not allowing for the unpredictability of human actions, but the latter part of the novel repays that in spades, so that's not too much of a problem.

The Folding Knife (****½) is an engrossing, page-turning economic and political thriller, executed with finesse by one of our best (but possibly most underrated) fantasists. The novel is available now in the UK and USA.
Posted by Adam Whitehead at 10:15

A great review. I've read KJ Parker's Engineer trilogy and loved it. The Folding Knife and the Hammer are both on my 'wanted list'.

How could Basso mend things with his sister? I remember her being portrayed as this total psycho bitch who would do anything and everything to hurt him because he killed her cheating husband in self-defense, and was totally ungrateful for any gestures he made in her direction.