L.J. Smith, the author of the bestselling Vampire Diaries series of novels, has been sacked by her publishers, HarperCollins. Another author will complete the series. 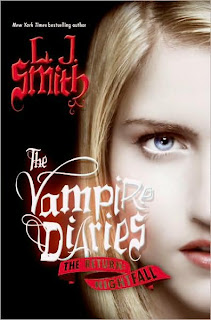 The Vampire Diaries is unusual in that the series premise was (apparently, going by fan comments in the SpoilerTV link above) conceived by the publisher and given to Smith as a work-for-hire project. Whilst Smith conceived of the characters, the world, the rules and so forth, HarperCollins owned the project and its copyright in their entirety. Apparently, during the recent books Smith was moving away from the character interrelationships which HarperCollins considered the core of the series. Smith has thus been replaced. On her website Smith suggested that fans continue to read the books and not feel too bad on her behalf.

The Vampire Diaries TV series is apparently unaffected by the news.

Oddly, the news comes on the same day that The CW has officially commissioned a pilot based on another work of Smith's, The Secret Circle trilogy.

This is an odd situation. The first Vampire Diaries book was published twenty years ago, so the relationship between author and publisher goes back some time. Thanks to Smith's work, the series became a bestseller and has spawned a hugely successful TV series. It's unusual for a publisher to exercise this kind of power, though it's also unusual for them to have it in the first place: in most cases the author retains copyright on their series, so this kind of move would be impossible to pull with most authors. Interesting to see if more information comes to light.
Posted by Adam Whitehead at 18:49

Surely, as the owners of the series, if something was going to happen along these lines, they should have nipped it in the bud earlier?

What an utterly ridiculous excuse.

This sounds really weird to me, particularly after 20 years. Maybe there’s been a change of the staff members that handle relations with the author, some kind of personality clash.

You don’t "sack" people after 20 years, particularly when the authors work has lead to income from a TV series, and thereby probably also an enormous increase in book sales. Sounds really disloyal to me.

thats just weird. i've NEVER heard of an author getting 'fired' for making changes to her series (even in tie-in work, you dont hear hear about it).

did george RR martin ever get fired for taking 5 years (and counting) to complete a single work in a series (although his fans might have something interesting to say on that). as far as I know, something like this really is COMPLETLY unheard of any where else.

Well if she produced the concept etc, either she got paid really well to hand over the rights, or she got hosed on the contract. I hope it's the former!

My understanding is that the publisher produced the concept, then hired her to work it out on their behalf whilst retaining full ownership.

In the case of other authors, they own their books and characters whilst the publishers own the publishing rights. It wouldn't be possible to 'sack' GRRM or most other authors from their series. If they tried they'd end up in a similar boat to Paul Kearney and his SEA-BEGGARS series, where the publisher won't release any more books but they won't let the author release them through another publisher, leading to a tedious stalemate whilst the author waits for the publishing rights to revert to him.

The event is similar to what happened with Karen Treviss on her STAR WARS books, though that was a voluntary departure. Her and the publishers had a disagreement on the direction of the books (the publishers wanted to change the direction of her Clone Wars to match changes in canon from the CGI series) and she decided to walk away instead.

...and thus the beginning of the awful future for publishing I laid out in my guest column on Grasping for the Wind - http://www.graspingforthewind.com/2010/11/22/i-have-seen-the-future-and-it-is-boring/

marketing will drive the selection of properties, publishers will own them and everything will be sold under house names, written as works-for-hire.

I started reading those when they first came out 20 years ago and I always loved the books themselves never watched the show but they should have never fired her. She brought them the series and the popularity that came with it doubt someone else could make it as good as she did.