In the UK, Pan Macmillan are rejacketing all of China Mieville's books in a new cover style. All nine of his books are getting this treatment and should be on the shelves shortly. 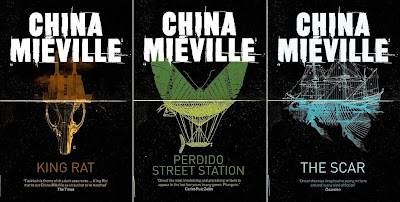 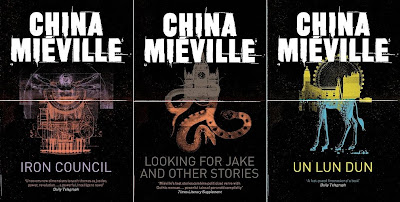 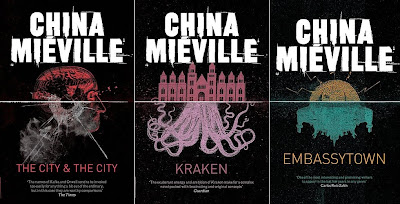 The multi-award-winning The City and The City (2009), Mieville's latest novel Kraken (2010) and his next novel Embassytown, due for publication in May 2011.

The new covers are appropriately dark and moody, but I'm not certain if they'd stand out enough on the shelf to attract attention. It'll be interesting to see them in the flesh, as it were, and if they result in a boost to his growing profile.
Posted by Adam Whitehead at 11:08

Are you planning to review Embassytown? It sounds interesting.

Speaking of space opera, do you know that Pat Rothfuss announced his intention to team up with Nathan Filion to buy the rights to FIREFLY? (and give them back to Joss Whedon)

I was going to - I believe a review copy is on its way - but from the sound of Twitter several other bloggers are reading it right now, so there'll be a number of reviews next week. So I'll prioritise THE CRIPPLED GOD and THE WISE MAN'S FEAR over it.

I love new covers! I think I've seen something similar to these not that long ago but I've never even heard of this author...

The Pat Rothfuss/Nathan Fillion thing MUST happen. Then in gratitude Joss Whedon produces and directs the movie of THE NAME OF THE WIND and Fillion stars in it (can he pass as the teenage Kvothe? No? Screw it, he can play him anyway) and the world rejoices.

Been following your blog for a while now and even going through past entries, too. Man, you're committed. Just wanted to congratulate you on your well-written, informative and entertaining posts.

That said: Does this general obsession of Nathan Fillion come from the fact that he was in FIREFLY (which I'll get around to watching eventually)? Cuz it seems as if every time I'm looking at movie casting suggestions his name is always there. Is he really that good of an actor?

And these review copies: how does that happen? Like, do you pay so that you can review them in advance, or does an author's agent/publisher send them to reviewers instead? If the latter, then that means you're respected and stuff, right? In that case, more congratulations are needed.

I was hoping you could maybe post something about it, since (I think) a lot of people read this blog regularly who might not necessarily follow his. This is the place to come to for F&SF/geeky news. Spread the word!

Fillion is certainly a good actor and has some variety to his roles, from the morally-conflicted-but-generally-good leading man (in FIREFLY) to self-obsessed narcisstic twat (in DOCTOR HORRIBLE) to genuinely menacing demonic preacher (in BUFFY THE VAMPIRE SLAYER) to self-deprecating buddy cop hero (in CASTLE, though he's not a cop but close enough). But mostly it's because he was excellent in FIREFLY.

As for review copies, they are sent out by the marketing departments of major publishers to reviewers and bloggers for free. And cheers for the kind words! :-)