Terry Pratchett and Neil Gaiman's co-written 1990 novel, Good Omens, is coming to television. Gavin Scott and ex-Monty Python member Terry Jones are in talks to adapt the script (though oddly Jones suggests it is for a movie version). At the SFX Weekender event Pratchett said that the current proposal is a four-episode mini-series, but did not say what television network was involved. 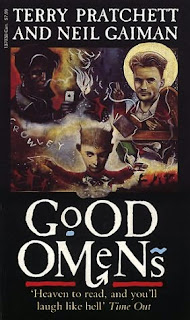 The book sees the Antichrist being born and an angel and demon deciding to save the world since they quite like hanging out there. The book was being developed as a movie project by Terry Gilliam for about a decade before this latest news broke.
Posted by Adam Whitehead at 19:56

About time this got off the ground. Hopefully a US station picks it up and I don't have to wait for the DVDs. This could be what Neil and Terry were toasting to months ago.

Coolio. I'm just about to read that book. Not that into Pratchett, nut I'm a huge Gaiman fan.

This is the BEST news!! You are in for a treat, Drake!

Hopefully Pratchett will get to see this before, you know, his brain gets too fried.

This is fantastic news.