Tensions wrack the court of Southmarch Castle. King Olin has been captured by the bandit rulers of Hierosol in the distant south and is being held for ransom, but raising the money is beggaring the kingdom. Olin's heir Prince Kendrick is trying to hold the country together whilst his younger twin siblings, Barrick and Briony, have their own problems to face. 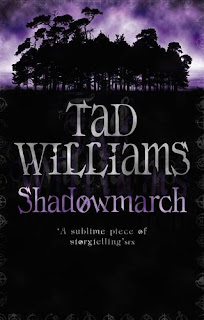 Meanwhile, in the far north, beyond the enigmatic Shadowline, the Twilight People are raising fresh armies to return to the March Kingdoms and avenge their defeat in a war three centuries ago. Far to the south, on the continent of Xand, a common girl is taken to wife by the Autarch, the god-emperor of Xis, for reasons utterly unknown to anyone. And far below Southmarch Castle, ancient secrets wait to be discovered...

Shadowmarch is the first book in the four-volume series of the same name, and is epic fantasy at its most straightforward. Tad Williams made his name with Memory, Sorrow and Thorn, a big series which arguably helped establish the modern fantasy paradigm (Wheel of Time and A Song of Ice and Fire followed in the trail it blazed) before switching to the far more original SF cyberfable Otherland. With Shadowmarch, Williams has returned to his roots, going once again for that big fat fantasy sweet spot.

This is a questionable choice for those who are familiar with the genre, since there are elements of Shadowmarch which recall not only other big fantasy series, but Williams' own prior work. With the best will in the world, it's hard not to feel that Shadowmarch Castle is a rebuilt Hayholt, a feeling enhanced by the presence in both works of sinister faerie folk and a race of diminutive good guys. Echoes of A Song of Ice and Fire can also be detected, from the barrier stretching across the northern border of the kingdom to the misadventures of a princess (well, almost) on another continent, although the details are rather different.

Oddly, despite being pretty traditional, Shadowmarch remains an engrossing read. Williams is an accomplished-enough writer that in his hands even the most familiar of plot twists feels fresh and interesting. His ability to juggle moments of genuine menace alongside ones of amusing whimsy (the Funderlings and Rooftoppers initially feel incongruous but become a more intriguing subplot as the book develops) adds a sparkle to the sometimes plodding political intrigue and the somewhat vague menace from the Twilight People (whose motivations and goals are not so much under-developed as left completely unexplained). The vast Shadowmarch Castle may feel a bit close to the similarly Gormenghastian edifice of the Hayholt (from Memory, Sorrow and Thorn), but it's also an atmospheric and rich setting for the story. 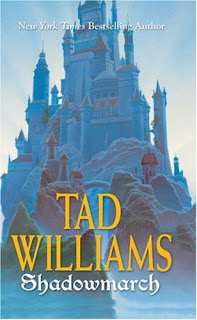 The characters are an interesting bunch, although again we are treading familiar waters here, with Briony as the tomboy-princess-who-wants-to-mix-it-up-with-the-boys and Barrick as the crippled-prince-who-harbours-a-dark-secret, not to mention the innocent-young-girl-who-becomes-a-major-power-unexpectedly and the soldier-on-a-mission-to-prove-himself. Again, Williams uses some nice elements of characterisation to bring these archetypal figures to life and make the reader care about what happens to them, but their familiarity may be an issue to some readers. The most interesting character is probably Chert, simply because dwarves get short shrift in most fantasy (to the point why you wonder authors bother to include them) and it's good to see one not only at the centre of the action, but also as the most well-developed character in the book. Unfortunately, a few side-characters are less complex, and a few are downright cliches (particularly some of the "Get this peasant out of my sight!" nobles).

Ultimately, Shadowmarch (***½) is the epic fantasy novel as remade by Blizzard Entertainment: totally unoriginal, very comfortable and somewhat predictable, but polished to a terrific sheen and enjoyable for all its familiarity. At the same time, that familiarity does make it impossible to recommend unreservedly. The foundations are solid, however, and certainly I'll be checking out the next book. The novel is available in the UK and USA now, along with its sequels Shadowplay, Shadowrise and Shadowheart.
Posted by Adam Whitehead at 21:19

I had been waiting very patiently for this series to come to its conclusion so that I might read it.. I'm very much looking forward too it.

I thoroughly enjoyed Memory, Sorrow and Thorn, except for the ending which i felt was very.. out of character for the rest of the work.. and War of the Flowers.. Otherland, it's less likely that I will read it.. but the Shadow Series I'm looking forward too.

I've finished the series a few weeks ago and parts of it can be quite longwinded, especially in volume 3 "Shadowrise", because if there is one thing Williams loves, it is to spin his tales. But on the other hand, just like you said, in the end it is Williams as a seasoned writer who makes the novel/series work. In my opinion the series as a whole is one of the best 'conventional' fantasy series of 00's! Although, when I think of it, in the end it isn't that conventional after all !

I have it but have yet to get to it. It will be my first foray into Williams.