French-based developers Cyanide have been working away quietly on their two Song of Ice and Fire-related games for a while now. Two titles are planned: an RPG and a real-time strategy game. The strategy game was given a name, Game of Throes: Genesis, a little while ago but no further information was revealed. 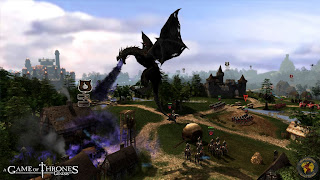 Expect complaints about Targaryen balance issues.
Today, via GDN, Cyanide unveiled their first in-game screenshots of the title, as well as some of the box art (by noted ASoIaF artist Marc Simonetti). The strategy game allows different paths to victory, by making political alliances, by starving them through economical warfare or through direct military action. The game also allows different eras in the history of Westeros to be explored, including Aegon the Conqueror's invasion and the War of the Five Kings that the books cover (though presumably playing as Aegon might be a bit dull: send in your dragons every time and wait for the screaming to die down).

The RTS is due for release in 'summer 2011'. The RPG is apparently a lot further off.

Interesting news, if it pans out. The screenshots look unremarkable, however, with the game apparently treading the Age of Empires III/Battle for Middle-earth path of good-but-not-outstanding RTS titles. However, the notion that you can use politics and economical warfare as well as out-and-out conflict sounds good. Whether a small French company can succeed where a major developer like the Creative Assembly (creators of the Total War series) have constantly struggled for a dozen years remains to be seen.

"A Game of Thrones - Genesis is the video game adaptation of George R.R. Martin’s best-seller series of novels A Song of Ice and Fire.

In this real time strategy game developed by Cyanide Studio (Blood Bowl), your political prowess will be as important as your strategic and military skills! A Game of Thrones - Genesis immerses you into the heart of the battles and intrigues between the Houses that shaped the Kingdom of Westeros. From Nymeria’s arrival in the Kingdom of Dorne to the awakening of the Others beyond the Wall, you’ll live the origins of the A Song of Ice and Fire saga through more than 1000 years of history. Take part in Westeros’ founding events and largest battles such as Aegon the Conqueror’s invasion on the continent or the War of the Usurper. In this great strategy game, victory does not necessarily result from brute force. You can choose to use a military approach and besiege your opponents, strangle them in an economical war, or even use dirty tricks and diplomacy to politically crush them. Treachery and deception are everywhere, so watch your back and prepare for battle! Thanks to a well-developed single player campaign written under supervision of the author George R.R. Martin, A Game of Thrones - Genesis is also a great multiplayer game. Up to 8 players confront each others to claim the Iron Throne in intense games where alliances, betrayals, cheap shots, and pitched battles take place."

EDIT: Coverage on the excellent Rock-Paper-Shotgun blog.
Posted by Adam Whitehead at 13:35

Email ThisBlogThis!Share to TwitterShare to FacebookShare to Pinterest
Labels: a song of ice and fire, cyanide, game of thrones: genesis, news

To me, Westeros: Total War is far more promising: http://www.twcenter.net/forums/forumdisplay.php?f=721

It's a modification for Medieval 2: Total War that will focus on Westeros during the War of the Five Kings. Being based on the Total War platform, it will of course follow the format of melding turn-based grand strategy with real-time tactical battles (which I think fits the books better than a straightforward RTS).

Right now there is just an early alpha release, but the team is working towards a more complete version.