The first two novels in Pierre Pevel's Cardinal's Blades series have been well-received, so it's good news that the third and concluding book in the series, The Dragon Arcana, has been given an English-language release date by Gollancz. The novel will be published on 20 October 2011 by Gollancz in the UK. It's already available now in French. 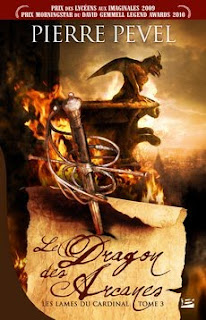 Pevel also has a new book, The Three Prince War, coming out in September 2012 from Gollancz. The blurb:

Pierre Pevel has written a fantasy Dumas novel, and now he's bringing all the skills of a historical fantasy writer to an epic stage. In the wake of Martin and Gemmell, his new project charts a dynastic power struggle between three brothers. When the King dies his will, to everyone's surprise, leaves the throne to the second of his three sons. It's a surprising choice, and a worrying one as it coincides with a prophecy: that the succession will lead to war, chaos and the undoing of the entire nation. It's something his eldest son can't allow to happen . . . so he challenges his brother's right to rule - as does the youngest son, with the full support of the Church behind him.

But while the prophecy itself is clear, it's not so clear which prince it's referring to. Lorn knows which side he's on: his King chose a sucessor, and Lorn is going to fight to the last to place him on the throne. Honouring that last wish is the right thing to do; Lorn is also fighting for his best friend and the man he believes should be king. But belief is one thing, victory in politics and war is another and the odds are against them. Worse: with every passing day the prophecies grow darker, and a land already torn by civil war is easy pickings for an invasion . . .

Sounds more traditional, but Pevel's a good enough writer to create something special out of the material.
Posted by Adam Whitehead at 15:58

Hooray! I'm so glad more are being translated... I stumbled across the Cardinal's Blades in a book shop, bought it and now I am 100% addicted!
Abby